When Chronic Migraines Are Caused by OTC Medications

When Chronic Migraines Are Caused by OTC Medications 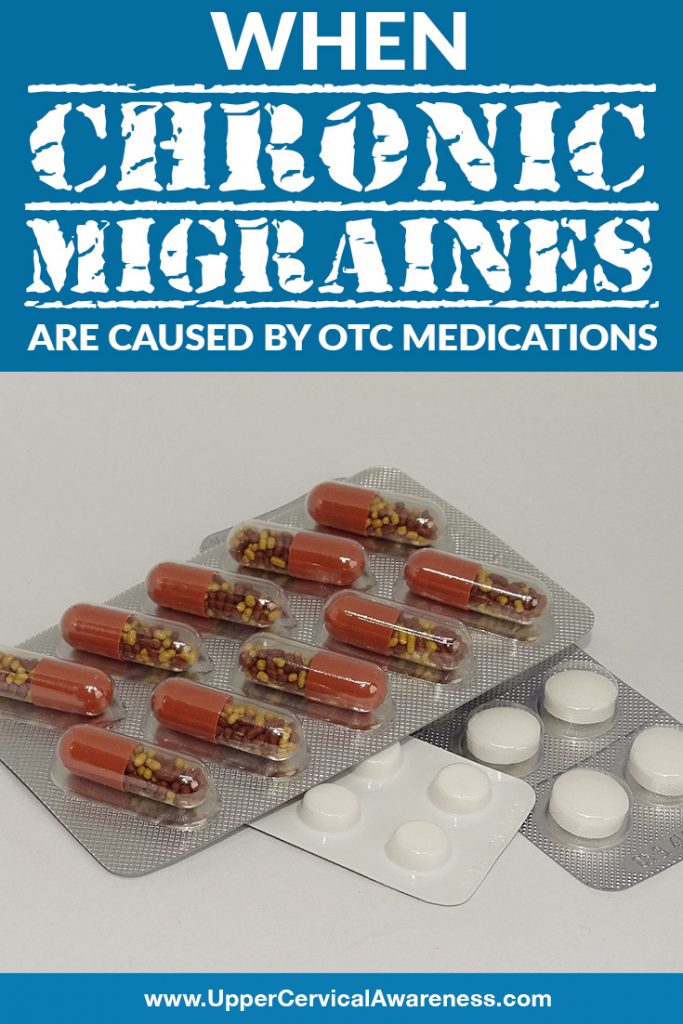 It is a common occurrence in the modern world. A person begins to have migraines. He or she chooses to self-treat with over-the-counter (OTC) medications. As the migraines become more frequent, so does medication use. Before long, migraines become a chronic condition. But could the medication be to blame? We’re about to expose the dangers of OTC headache medications and why you should be seeking natural relief rather than skipping the doctor altogether.

Shocking Stats Regarding Self-Medication in the US

The Consumer Healthcare Products Association has revealed America’s tendency to trust western medications but not doctors. The average person sees a doctor three times per year. However, that same person will take 26 trips per year to the store to buy over-the-counter drugs! Do you see the problem with those stats?

First of all, how many people really take a close look at the labels on a pill bottle? Most have the idea that if it was that dangerous it would require a prescription. However, many headache medications carry the same warning – that if you take the medication too often, it can have adverse effects. Form stomach issues to actually causing more headaches and migraines, these warnings should be taken seriously.

The Cycle of Medication and Chronic Migraines

That’s right, the very pills you may be popping when a migraine springs upon you could be what is triggering the next attack in a day or two. Before long, you find yourself in a pattern of daily medication use, not even realizing that the medication is a part of the problem. These headaches are referred to as rebound or medication overuse headaches.

The Problem with Headache Medications

Sometimes we throw the term migraines treatment around too loosely. First, the fact is that headache medications are not FDA approved to be called migraine treatment. This is an off-label use. Second, Headache medications don’t really treat anything. They just cover up symptoms. They do nothing to stop what caused the headache to start in the first place. But since we feel better by the time the pill wears off, we treat it like a miracle drug that’s always just a medicine cabinet away when the next migraine strikes.

Another Danger of Self-Treatment

If you form a psychological dependence on something, that means you are addicted. Someone may not view addiction to ibuprofen or acetaminophen in the same light as an alcohol or nicotine addiction, but that doesn’t make it harmless. While you don’t suffer the physical addiction (there are no withdrawal symptoms), you may start to find yourself reaching for that bottle every day, even when you haven’t had a headache yet “just in case.” That’s a sign of addiction. The pain reliever should be a last resort. Long-term use is warned against on the label, and the adverse effects are serious. Depending on the pain reliever you take daily, you could be looking at any of the following complications:

That’s not the list of possibilities you want, so here are a few ways to tell if you are addicted to OTC pain relievers. You—

If you find yourself in these situations, the best thing to do is stop taking the OTC drug immediately and seek out another source of help for your condition. The good news is that because the addiction is not physiological, you won’t have withdrawal symptoms, so the only downside to going “cold turkey” is that you won’t have anything to take the edge off when the next migraine occurs.

That’s okay though because it is time to stop fighting the symptoms and to start going after the underlying problem.

It isn’t well publicized, but one of the three most common migraine symptoms is neck pain. Why is this the case? For many, migraines don’t even start until after some type of trauma. It could be a fender-bender or even a slip and fall on an icy sidewalk. Regardless of how the injury occurs, the main issue is that an upper cervical misalignment takes place in the atlas (C1) that goes undetected. This starts a series of neurological and vascular changes in the body that can turn into a long-term issue with migraines.

Upper cervical chiropractic is a subspecialty in the field that focuses on the atlas. Diagnostic imagining is used to detect misalignments that are as small as a fraction of a millimeter. Even such a tiny problem can affect blood flow to the brain, brainstem function, and cerebrospinal fluid drainage. Any of these circumstances can lead to migraines.

The good news is that many patients begin to see immediate benefits once the misalignment is corrected. And since adjustments are gentle and long-lasting, this becomes an effective and cost-efficient way to let the body heal itself naturally.

To learn more about upper cervical chiropractic care, find a practitioner near you using this site. A no-obligation consultation may be your first step toward fewer and less severe migraines. Some patients have even found complete relief.