What Is Vertigo And Can A Chiropractor Help With Vertigo?

Home/Vertigo / Dizziness / Menieres/What Is Vertigo And Can A Chiropractor Help With Vertigo?
Previous Next

What Is Vertigo And Can A Chiropractor Help With Vertigo? 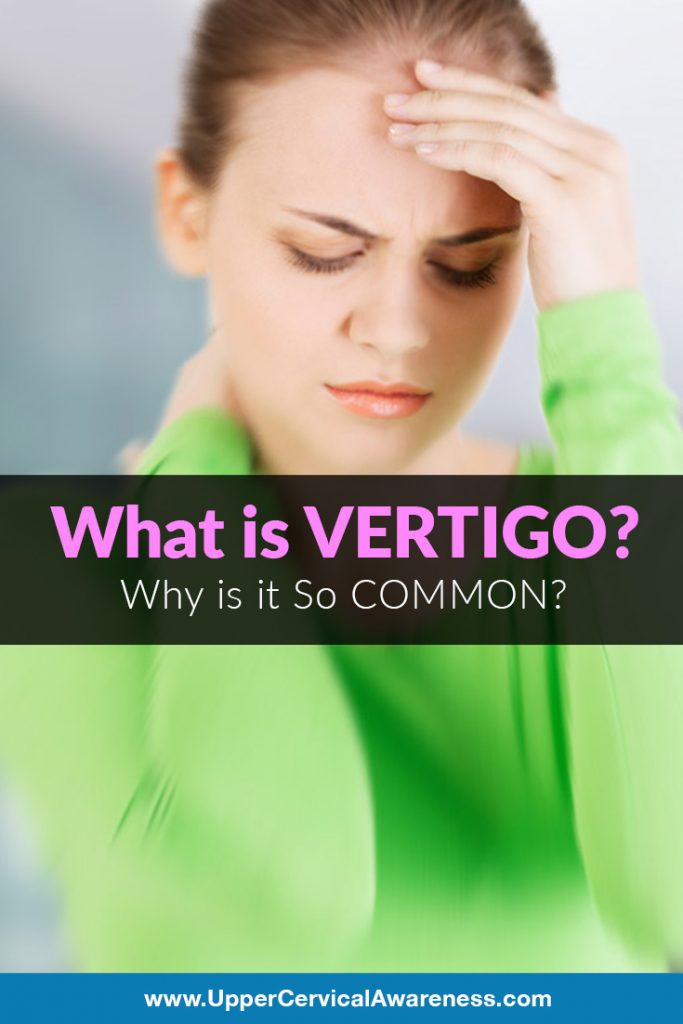 Vertigo is a medical term that refers to the sensation of motion that is out of harmony with reality. A person with vertigo may feel like he is spinning while he is sitting still. He may also have the feeling that the room is spinning. Often, it begins immediately following a movement of the head.  What is vertigo

How Common Is Vertigo and Dizziness?

Vertigo is one of the most common reasons that people go to a physician. Overall, it affects as much as 10% of the population. However, this condition becomes more common as a person ages. As much as 40% of the 40-and-over population will experience dizziness at some point. A 10-year-long study of emergency rooms in the United States revealed that about 2.5% of ER visits are vertigo-related.

There are 2 types of vertigo. We will address what these two classes are and several potential causes of each type.

The inner ear is a major component in how the body controls balance. As a result, a problem with the inner ear can easily lead to symptoms like vertigo. Peripheral vertigo involves something wrong with either the inner ear itself or the vestibulocochlear nerve (CN VIII) that communicates between the ear and the brainstem.

Medications that may result in the peripheral type include diuretics (water pill), aminoglycoside antibiotics, certain cancer drugs, and salicylates.

The onset of dizziness frequently begins following head or neck injuries such as a concussion or whiplash. Post-concussion syndrome may be diagnosed.

Inflammation of the vestibulocochlear nerve can lead to this condition. The associated vertigo usually lasts about a week. Less severe attacks may happen later.

This is a rare vestibular condition that causes vertigo, hearing loss, tinnitus (ringing in the ears), and a feeling of pressure in the affected ear. Vertigo attacks can last for hours or even days and may be severe enough to cause falls, nausea, and vomiting.

An issue with the brainstem, which receives signals from the vestibulocochlear nerve, can result in balance and spatial orientation issues like vertigo.

Causes of central vertigo include:

Vertigo is a symptom for up to 40% of migraine patients. Vestibular migraines may present with vertigo but without the severe headache that is usually associated with migraines. As a result, these may be referred to as silent migraines. However, vertigo can occur along with common migraines as well.

This is a condition that affects the central nervous system. It is generally considered to be immune-mediated in nature. The body attacks the nerves, specifically destroying the myelin sheath that protects the nerves and causing scar tissue. As a result, degenerative nerve damage occurs, leading to many symptoms. Vertigo is usually one of the first symptoms.

A stroke is when the brain’s blood supply is cut off. It is a very serious condition and emergency medical attention should be sought if a stroke is likely.

Brain or brainstem tumors, both cancerous and non-cancerous, can cause central vertigo. There is also the possibility of a tumor affecting the vestibulocochlear nerve and causing peripheral vertigo.

A rare condition called epileptic vertigo can cause vertigo to occur multiple times per day. This happens when a head injury has damaged the temporal lobe. As a general rule, injuries that lead to epileptic vertigo are forceful enough to cause a person to lose consciousness.

Traditional Care for Vertigo and Dizziness

For cases of positional vertigo, a doctor may attempt to get the crystals of the ear to fall back into place by a series of movements called the Epley Maneuver. A doctor or physical therapist will usually assist a person to make the proper maneuvers. A simplified version called the home Epley Maneuver has been developed so that an individual may try to reset the crystals of the ear at home.

Most doctors will recommend a water pill (diuretic) for a person dealing with chronic dizziness. This is because these drugs reduce fluid retention in the body which is often blamed for the problem. Reducing fluid retention has become a standard care practice. However, as noted above, these and other medications can actually cause dizziness.

In some cases, such as in a severe case of Meniere’s disease, doctors may recommend injections to the inner ear or even surgery in an attempt to relieve fluid buildup inside the ear. But whether we are talking about surgery or repositioning of the crystals of the ear, these all involve treatment of symptoms after the fact. Some patients would rather seek natural and preventative care methods to stop the next vertigo attack from happening.

A Shift to Natural Care |

Major or minor head or neck trauma is frequently a precursor to vertigo. Concussions, whiplash injuries, slip and fall injuries, sports injuries, and other forms of head and neck trauma often lead to vertigo and dizziness whether the symptoms begin immediately or even years later.

As a result, there is substantial evidence that vertigo and related conditions may relate to a misalignment of the upper neck. Below we will evaluate several case studies and look into a natural approach.

In one study involving 60 patients with vertigo, 48 saw complete relief after seeking upper cervical chiropractic care, and the other 12 all saw significant improvement in frequency and severity. It is interesting to note that 56 of the 60 could recall a particular head or neck trauma that occurred at some point before vertigo began. This study helps to connect vertigo to injuries that cause upper cervical misalignments and shows the positive effects of upper cervical specific care.

Another study was performed involving 139 Meniere’s patients. After just 1 to 2 adjustments, 136 patients saw a dramatic reduction in vertigo severity as well as a reduction in other symptoms of the condition. Continued care helped patients find even more benefits. As a result, after two years of care, the average severity of vertigo attacks dropped from an 8.5 out of 10 to just 1.4 out of 10. All 139 patients had suffered an upper cervical misalignment due to car accidents or other whiplash-type injuries that had previously been undiagnosed.

An even longer and larger study was conducted a few years later. This study involved 300 Meniere’s disease patients over the course of 6 years. 291 of the 300 patients (97%) saw a dramatic reduction in vertigo severity. The six-year reduction in severity brought the 8.5 out of 10 average to a mere 0.8 out of 10 average – an improvement of about 90%. Once again, the study focused on patients with both vertigo and a history of whiplash trauma. As a result, the paper concluded with the recommendation to refer all vertigo patients with a history of trauma to an upper cervical chiropractor for examination.

Besides these larger studies, there have also been a number of individual case studies. For example, a 45-year-old man had been displaying Meniere’s symptoms for 12 years and had received an official diagnosis five years prior to upper cervical care. After five months of upper cervical adjustments, he remarked an 85% improvement in his symptoms.

Another example involves a 52-year-old man who was suffering from vertigo due to Meniere’s disease along with tension headaches, back pain, and several other health problems. After only four adjustments a 60% improvement was noted. This and other studies help to show the efficacy of various forms of upper cervical chiropractic care.

How Is the Upper Neck Related?

It makes sense that correcting the misalignment that creates these conditions can give the body the opportunity to heal. As healing occurs, vertigo severity may be reduced. Thus, patients often see a rapid reduction in vertigo severity followed by ongoing improvements over time.

Finding Natural Relief in Your Area

The studies noted above show that real relief from vertigo is available without drugs or side effects. In fact, the sheer number of patients who benefit from upper cervical chiropractic care following head or neck trauma provides valid cause to seek care if you are experiencing vertigo or other symptoms that may have begun in the weeks, months, or even years following the injury. Find an upper cervical doctor in your area to schedule a consultation today.

How do chiropractors treat vertigo?
Chiropractors use the Epley Maneuver to adjust or shift your head in different positions. This is done to reposition the crystals inside the inner ear. Chiropractors also recommend exercises and activities to help ease vertigo.