Vertigo and 9 Other Meniere’s Disease Symptoms

Vertigo and 9 Other Meniere’s Disease Symptoms 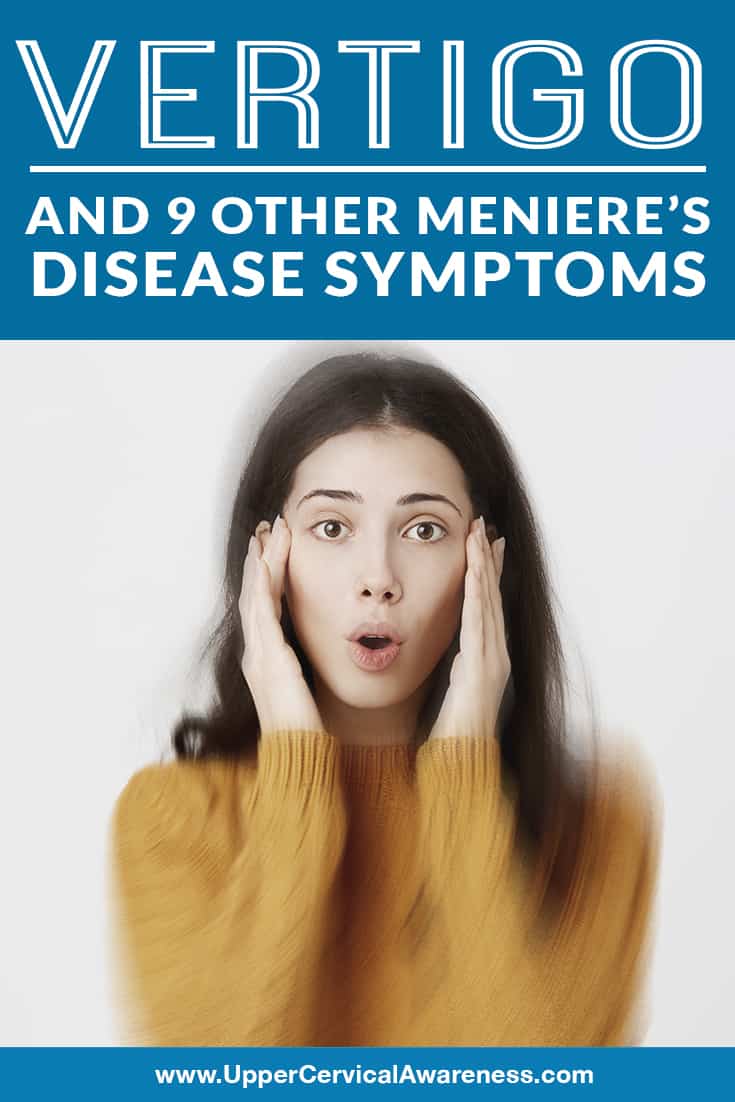 Meniere’s disease is also known as idiopathic endolymphatic hydrops. It is an illness that affects the inner ear. It disrupts your ability to hear and maintain your body’s balance. Its various symptoms vary from one person to another.

While it is a chronic episodic condition, in some cases, lifestyle changes can be beneficial in reducing the severity of this disease. Through the years, upper cervical chiropractic care has proven to be active and safe for this health problem. We will discuss more on this particular type of care option later. First, let’s have a look at some signs that tell you are most likely suffering from Meniere’s disease.

It is one of the leading signs of Meniere’s disease. Vertigo is a spinning feeling and a sensation of being off-balance, and it may range from moderate to severe. Also, it may last from just a few minutes to 24 hours. Furthermore, bouts of vertigo frequently come on suddenly without any warning. Sometimes, vertigo attacks can be dangerous, especially when it happens while you are driving a car, or climbing the stairs or a ladder. There is a high risk of injuring yourself if you find yourself in such situations, unable to keep your balance during crucial moments.

Nausea may likely happen if you are experiencing a prolonged and severe vertigo attack. If a person experiences constant dizziness, it can interfere with digestion and cause a need to vomit. Not all those with Meniere’s disease experience this sensation because it is vertigo induced, and not due to the inner ear problem.

A study reported that as many as one-third of all patients with Meniere’s disease also suffer from migraines. It is unclear why these two are connected, but there is likely a pathophysiologic link between a vestibular migraine and Meniere’s disease.

People who have Meniere’s report a weird feeling of fullness in their affected ear. Also, they describe it as similar to using earplugs. It often occurs because of the sudden changes in the pressure of the fluids within the inner ear. This sensation may appear before, during, or after an episode of Meniere’s disease.

Tinnitus refers to the noise in the ears. It could be ringing, roaring, or buzzing sound. People who suffer from it know that it is not a pleasant experience to have. It comes and goes at random. It is not just uncomfortable. Often, it can also be very distracting because the sound comes from within the ear. As a result, it causes you to miss out on your rest and sleep and prevents you from concentrating.

Meniere’s is popular for causing hearing loss, specifically of the lower sound tones. It sets Meniere’s disease apart from several other conditions, such as age-related hearing loss or a noise-induced one. For people with Meniere’s, hearing loss and vertigo often occur together, which may happen irregularly. Unfortunately, as the disease worsens, hearing loss also becomes more frequent and even permanent if not properly cared for in time.

It is another symptom that appears due to vertigo attacks. It can be due to a classic hormonal tendency. It will often go away as soon as the vertigo bout subsides.

These can happen, and as a result, people fall abruptly without reason. However, you do not lose consciousness. In general, you can get up without any lingering side effects. About as few as ten percent of those with Meniere’s disease suffer from these drop attacks.

People with Meniere’s disease are also prone to having sound sensitivity. As a result, certain noises can be quite painful for them. High-frequency sounds can be intolerable as well as soft noises from a specific pitch or frequency. Sensitivity to certain sounds is one of the more frequently occurring symptoms of Meniere’s disease.

A case study sheds some interesting data on Meniere’s disease and what may be its root cause. This research is more than just a story of hope for patients who have Meniere’s disease. It is also a study of relief and healing for numerous patients.

This study involved 139 patients with Meniere’s disease. All of the patients reported experiencing injury or trauma to their neck or head in the past. Some of these injuries even happened as long as a decade and a half ago. It can take that long for some health problems to get worse. It is one of the reasons why a patient’s history is important. Any head or neck trauma can lead to a misaligned bone in the spinal column’s top region. Then, a misalignment in this region can put the brainstem under pressure. Often, this leads to an array of health issues, including Meniere’s disease.

All of the participants in the study had one thing in common: Each one suffered a misaligned vertebra at the top of their upper cervical spine or neck. Finally, each patient received an adjustment particularly customized to their needs by an upper cervical chiropractor. All 136 patients reported experiencing significant improvements in their various symptoms. Some of them even confirmed that their Meniere’s disease went away entirely.