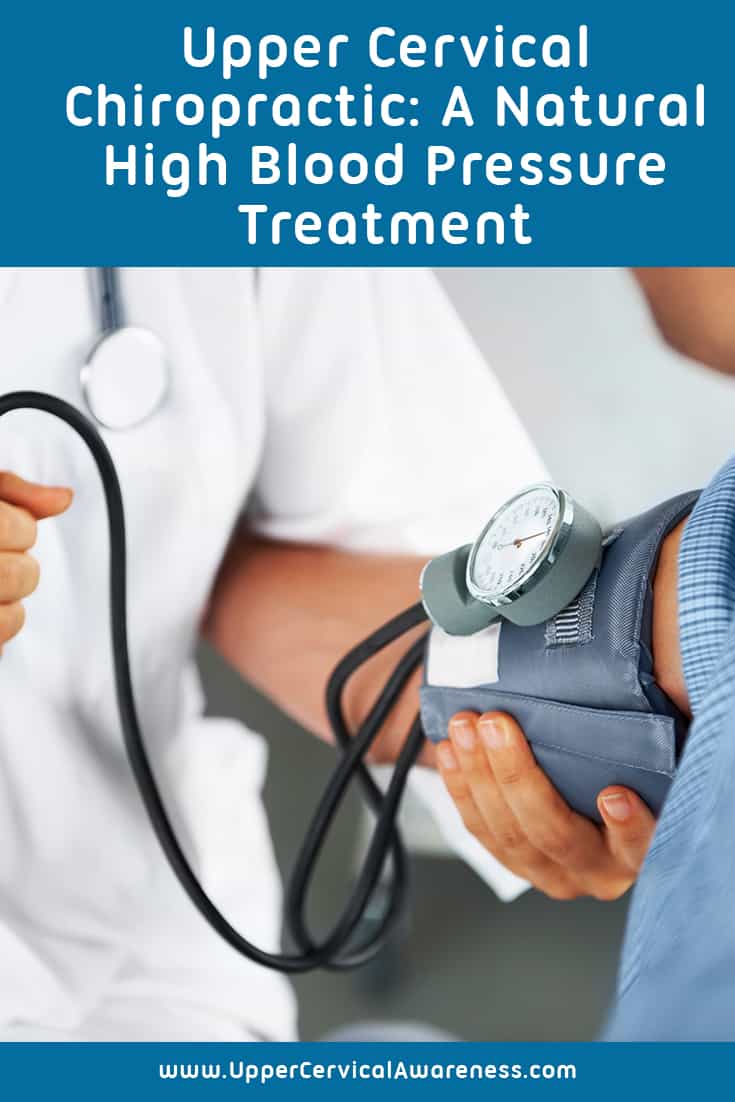 In the US, about one in three adults suffer from hypertension (high blood pressure). If that statistic from the CDC isn’t shocking enough, the website also notes that barely over half of these hypertensive patients have the problem under control. It is no wonder that heart disease and stroke are such prominent killers in the US. How can you protect yourself and find a natural treatment for hypertension?

We’re about to consider the science behind a study that revealed a special chiropractic adjustment called an atlas adjustment has the potency of taking two different blood pressure medications to get this deadly issue under control. Let’s take a closer look at the natural way to relieve hypertension.

A study performed in Chicago, Illinois in 2007 should have gotten a lot more attention than it did. After all, who wouldn’t want a natural way to relieve high blood pressure (except for pharmaceutical companies, of course). If you managed to miss the study entirely, as many did, we’ll provide you with some of the highlights here.

25 patients experiencing an early stage of hypertension were part of the study. Each underwent upper cervical chiropractic care. This is a subspecialty of chiropractic that focuses on the top two bones of the spine. Practitioners use modern diagnostic imaging techniques and X-rays to take precise measurements. The adjustments on the C1 and C2 are so gentle that 25 patients could be put in a control group.

Even the doctors who lead the study were shocked by just how much of a benefit the patients were receiving. It is interesting to note that this study ended up occurring almost by accident. The lead researcher noted reduction or even elimination of the blood pressure medication that patients take after chiropractic care. As a result, researchers had to try to repeat the results in a controlled setting. Amazingly, it was a success.

How Does the Atlas Affect Blood Pressure?

The question that is probably on your mind now is: How does the alignment of the atlas (the top bone in the spine) have an effect on blood pressure? That’s a good question, and there are a couple of factors in play.
For one thing, the atlas surrounds and protects the brainstem. This is the part of the brain that all of the electrical signals in the body have to go through. If a misalignment puts pressure on the brainstem, just about any function of the body can act up, including blood pressure.

Secondly, the alignment of the cervical spine can affect blood flow to the brain due to the fact that each of these vertebrae has tiny loops of bone called vertebral foramen. The vertebral arteries pass through these loops on the way to the brain. So it makes sense that nervous system, as well as vascular function, can be affected by a misalignment.

The fact of the matter is that the study is not the only proof that this natural method works. For example, another upper cervical chiropractor published a case study involving a 57-year-old-man who had been dealing with hypertension for 5 years and was on medication for it. What were the results of upper cervical care? The patient was able to stop taking his blood pressure medication after 16 adjustments.

That’s another good question. Maybe it has something to do with the 37 billion dollars that we spend each year on blood pressure treatments. Upper cervical chiropractic isn’t a pill that should be used every day. It doesn’t even involve an adjustment that needs to be performed every week once the atlas starts to hold in place on its own. Medicine is big business in the United States, and that makes natural and cost-effective options unpopular among “experts.” But the fact is that studies show it really works.

We encourage anyone who is dealing with high blood pressure to give upper cervical chiropractic a try. Obviously, it would be unwise to stop your medication on your own. But why not try this natural method and see if your blood pressure is lower at your next physical? You may find out that don’t need that hypertension medication anymore, or you may be able to switch to a lower dose (which is always good for reducing side effects).

To learn more about upper cervical chiropractic care and how it can be used to treat hypertension naturally, contact a practitioner in your area today. An upper cervical examination may be your first step on the path to getting your blood pressure back under control in a safe and natural way.

Can spine problems cause high blood pressure?
Spine problems or spine injuries can make your blood pressure dangerously high. If not treated early, and coupled with very low heartbeats, it can lead to a stroke, seizure, or cardiac arrest.