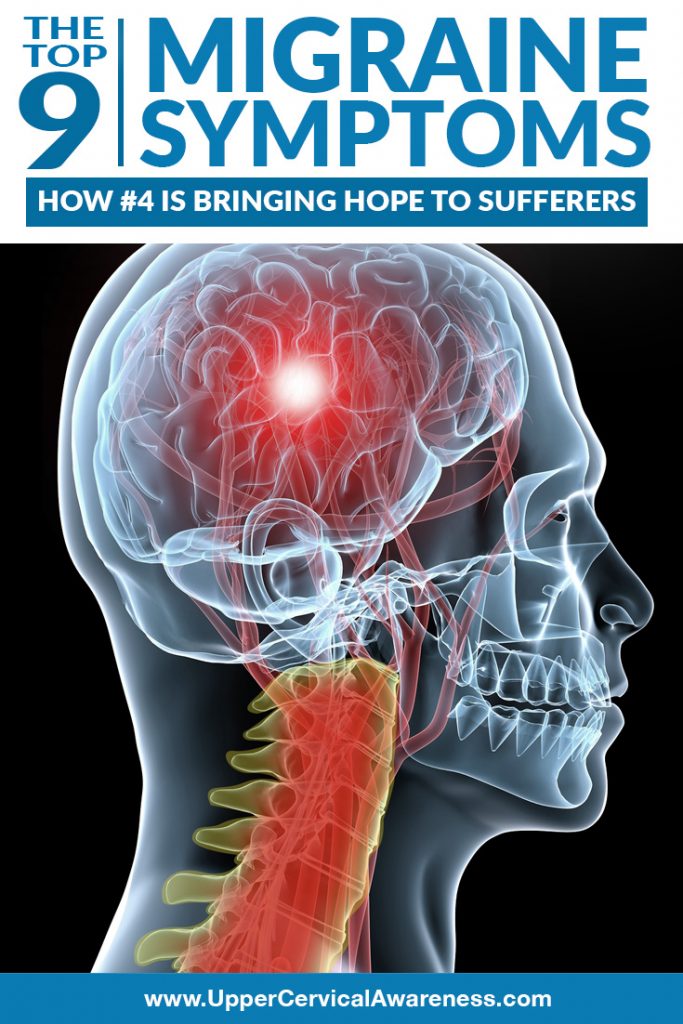 Migraines are a debilitating neurological condition that affects 12% of people. That equates to 1 in every 4 households in the US having a migraine sufferer. It is important to learn everything you can about your condition so that you seek out the right kind of care. Let’s start by discussing the 9 most common migraine symptoms in connection with 2 studies (including American Migraine Study II). Then we’ll take a closer look at symptom number 4 and how it is leading to hope for migraine sufferers around the world.

We’ll countdown the symptoms starting with the least common and concluding with the most common (spoiler alert – it’s a headache).

Nausea is one of the most common symptoms of a migraine (we’ll get to that in just a minute), but sometimes it can get bad enough to cause vomiting. This usually has to do more with the severity of the pain than anything else. However, vestibular migraines may present with dizziness or vertigo. These symptoms, though fairly uncommon, can also lead to vomiting. According to researchers, about 29% of migraineurs end up leaning over the toilet.

Depending on the study, this number can fluctuate. From the study we researched, this symptom reaches number 8 with 36% occurrence, but please keep in mind that other studies have this at about 1 in 4 patients rather than 1 in 3. Aura occurs 20 to 30 minutes before a migraine actually begins and consists primarily of visual symptoms. Having migraine with aura puts a person at higher risk for a number of associated conditions such as depression.

Aura is not the only part of a migraine that affects vision. 44% of patients expressed vision problems such as blurred or double vision during the migraine itself. Other less common visual symptoms include temporary vision loss. When this only happens in one eye, it usually signifies an ocular migraine. Ocular migraines often just have visual symptoms although there can also be pain behind the eye.

You may be surprised to see this so low on the list since many people have the misconception that migraine pain is always on one side. The fact is that according to a survey of 4,000 migraine sufferers, only 59% had single-sided pain. So don’t write that pain off as a headache rather than a migraine just because it hurts all the way around. If you have many of the other symptoms on this list, you’re probably dealing with more than just tension headaches.

Fortunately for about two-thirds of the 73% of migraine patients with nausea, it doesn’t progress to vomiting. Again, nausea can be the result of pain or of vestibular symptoms that accompany a migraine. Sometimes lying down in a dark, quiet room can help nausea.

This is a bit of a controversial migraine symptom. Some medical professionals write it off as a coincidence. However, research shows that about 75% of migraine patients also experience neck pain. In fact, 3 in 5 migraineurs say that neck pain precedes the onset of the migraine itself. We will get into a theory as to why neck pain is such a common migraine symptom after we conclude our symptoms list. Factoring in neck pain as a symptom rather than a coincidence leads to hope in finding a natural source of relief.

Sensory sensitivity is very common for migraine patients, and it is possible that sensitivity to smell didn’t make the list simply because it wasn’t a part of the study. However, sound sensitivity can involve wanting to be away from loud noise or any repetitive, annoying sound. Things you are normally okay with, such as a loved one chewing, may sound like nails on a chalkboard during a migraine attack. 76% of responders reported this symptom.

If you experience migraines, you probably get the urge to retire to a dark and quiet room when one occurs. Recent research reveals why that is the case – bright lights can actually make migraines worse. This symptom applies to 80% of migraineurs, so it is pretty safe to say if you have had a migraine, you know what we’re talking about.

You’re right! The number one symptom of a migraine is a headache. But not just any headache. Migraines are characterized by a pulsating or throbbing pain. In fact, 85% of migraineurs report this type of pain, and it is often made worse by physical exertion (not that many people try to exercise during a migraine). If you are wondering why only 85% report this symptom and not 100%, it’s possible that some of the responders in the study experienced a different type of pain or were unfamiliar with how to describe the pain they felt. A limited number may have what is commonly called silent migraines. These are migraines with no headache.

The connection with neck pain is very interesting because something else that researchers have discovered is a link between migraines and an upper cervical misalignment. It is no wonder then that many in case studies have found complete relief after as little as one or two adjustments. Correcting the source of the migraines immediately reduces severity and frequency and may even completely resolve the condition.

How can you know if you are a good candidate for upper cervical care? Contact a practitioner in your area and schedule a no-obligation consultation today. You may be on your way to finding natural help for your migraines.