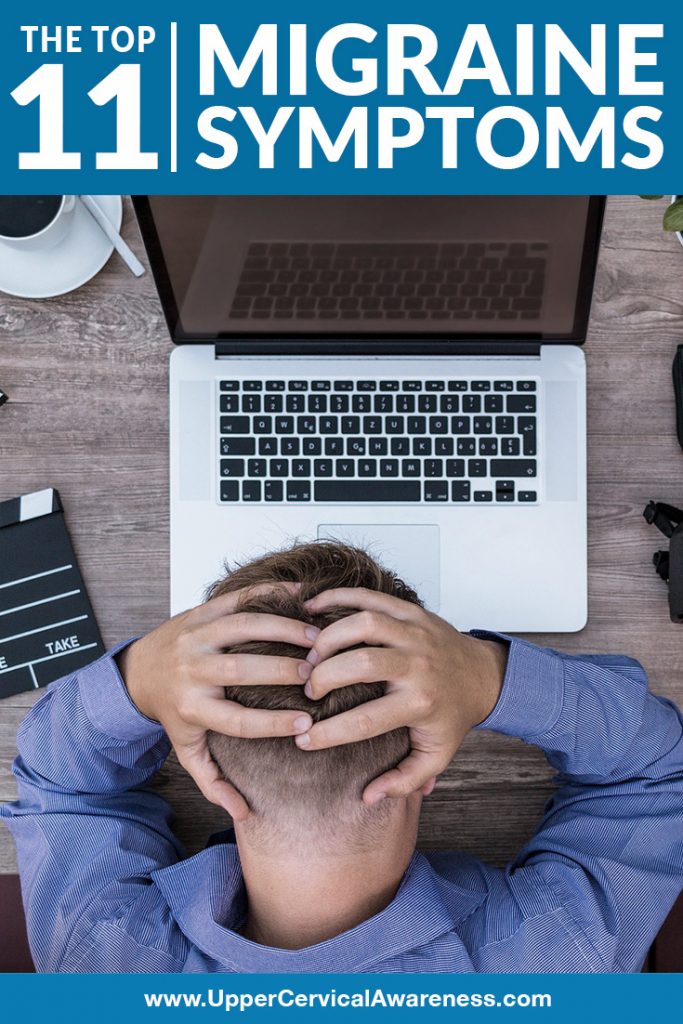 Do you want to know if that recurring headache you keep having is actually a migraine? We’re going to look at a list of 11 migraines symptoms. Some may seem familiar, but others are a little more obscure. This may help clear up any confusion about your condition. And whether you are dealing with migraines or headaches, we’ll introduce you to a form of drug-free care you may never have heard of before. Let’s get started!

This is the symptom most people associate with migraines. First of all, it is important to note that migraines can have varying degrees of severity, so don’t assume it’s just a tension headache because you can still function. The best way to tell the difference is to discern if the pain is an ache or a throb. You can’t assume its not a migraine if you are hurting on both sides. While some migraines are one-sided, you can have pain on both sides of your head. Finally, don’t be fooled if you have no headache at all. Not all migraines are accompanied by a headache.

Only about 20-25% of migraine patients experience this, but if you get aura 20-30 minutes before the headache starts, that is a classic sign of migraines. What is aura? It’s mostly visual symptoms that preceded a migraine. Wavy or zig-zag lines and crosshatches are some of the more common patterns of light you may see during aura.

These are all symptoms that can precede a migraine, sometimes up to a day ahead of time. If you are not prone to sudden mood swings and only notice them in the hours before a headache sets in, this is yet another telltale migraine symptom.

Don’t write your headache off as a sinus headache just because you are congested. Migraines can present with a stuffy nose and watery eyes as well. In fact, some studies have revealed that migraines are frequently mistaken for sinus headaches.

Are you worried you may have to quit your favorite food because you always get a bad headache a few hours after you eat it? The good news is that the food in question may not be causing the headache at all. The bad news is that the headache may be a migraine. Food cravings are a common migraine symptom that often precedes an attack by up to a day, fooling many people into thinking that foods are a common migraine trigger when they are really one of the less common triggers.

This is a big one. In fact, according to one study, it is the third most common migraine symptom, and it’s not far behind the top two (number one is a headache). As many as 75% of migraineurs experience neck pain either before or during a migraine. In fact, for many people the pain starts at the neck and radiates upward until the headache begins. Unfortunately, many people, including doctors, fail to connect migraines and headaches.

Did you know that having to suddenly go to the bathroom more often than usually may tip you off that a migraine is on the way? This is another migraine symptom that acts as a predecessor to the headache.

You guessed it, yawning is another signal that a migraine is on the way. And for your information, all of the symptoms that precede a migraine are called the prodrome phase. Other symptoms that follow a migraine comprise the postdrome (sometimes called a migraine hangover).

Nausea is among the most common migraine symptoms. Perhaps this is due to the sheer amount of pain caused by a migraine. Fortunately, vomiting is not as common as nausea, but for some migraineurs, both of these symptoms go hand in hand.

Whether it is lights, sounds, smells, or a combination of the three, most migraine patients present with some kind of sensory sensitivity (the second most common symptom). These sensory overloads can serve as a trigger for a migraine but also cause a person to seek out dark, quiet places away from people in order to recover during an attack.

If your migraines are not severe, this may be the primary way you realize that you are dealing with more than just a headache. Physical exertion during a migraine will usually make symptoms worse, especially the throbbing pain. Complaints often occur of migraine pain worsening with lifting weights, running, or sexual activity.

Did our list help you to determine whether you are dealing with migraines or a headache? We hope so. But we also want you to feel better, so we’d like to introduce you to something that can help – upper cervical chiropractic care.

If you are suffering from migraines, especially if you have a history of head or neck trauma, you may be dealing with an upper cervical misalignment., When the top two bones of the neck are off by even a fraction of a millimeter, this can affect blood flow to the brain, cerebrospinal fluid drainage, and brainstem function. Fortunately, a gentle adjustment can correct such a misalignment, and if that was causing your migraines, you may see marked improvement. To learn more, contact an upper cervical chiropractor in your vicinity.