Home/Headaches, Migraines / Headaches/Top 10 Most Common Migraine Triggers (and What to Do About Them)
Previous Next 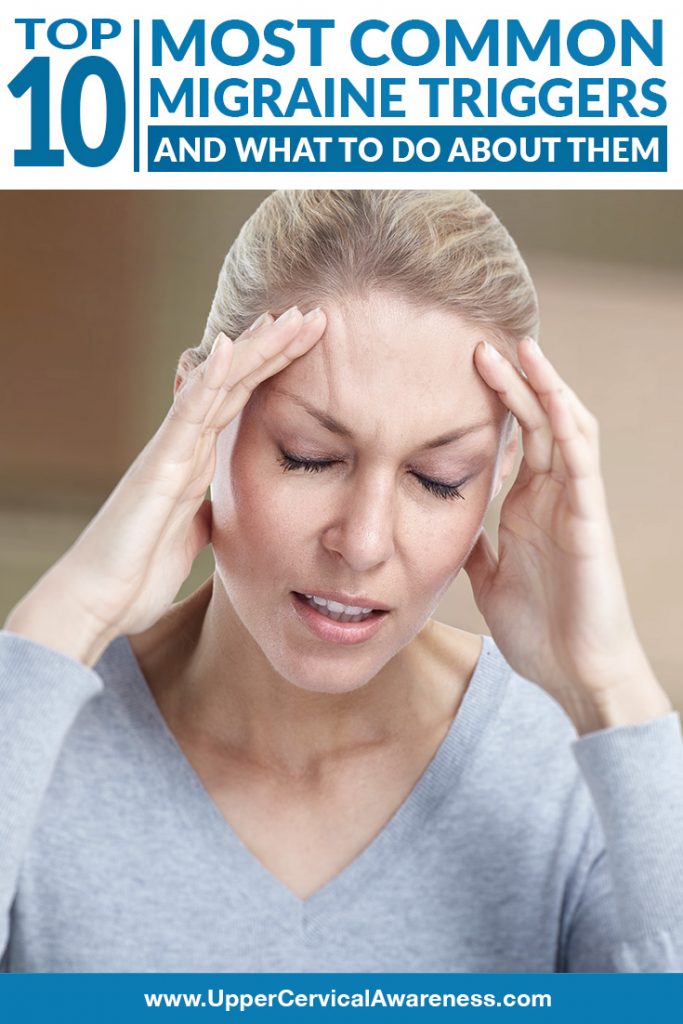 We’re about to countdown the top 10 migraines triggers for you according to a recent study. But knowing what triggers a migraine episode is only part of the battle. You can’t avoid every migraine trigger all of the time. So we’ll also look at a natural therapy that is providing hope for many migraine sufferers, even for those with chronic daily migraines. For now, let’s get to our list of the top 10 migraine triggers. We’ll start with the least common of the 10 and work our way up to the biggest culprit in the onset of migraine episodes.

According to the study, more research has to be done to determine if alcoholic beverages in general are a trigger or if just certain spirits set off an attack. Either way, this was the 10th most common trigger, affecting 27% of migraineurs, so patients should limit alcohol intake if they decide to have any at all.

The sense of smell can play a large role in the onset of migraines. Strong perfumes, cleaning products, gasoline, paint, and nail polish are among those that triggered migraines for 38% of people in the study. This makes odors just as common of a trigger as visual stimuli.

You may be surprised at how low this trigger is on the list considering how many migraines symptoms are visual. However, sights trigger about the same amount of migraines as smells at 38%. Specific visual triggers include bright lights, flashing or flickering lights, and contrasting patterns.

What weather factors affect migraines. Sudden changes in weather (temperature, pressure, humidity) are the number one consideration. However, some studies have linked nearby lightning strikes to migraines. Others contribute the problem to strong winds. Weather affected 39% of migraine sufferers in the study.

Getting a good night’s rest is vital for migraine patients. Going too long without sleep or having restless sleep may lead to a migraine the next day. This was true for 43% of people in the study. So be sure to have a good sleep schedule and stick to it if you get migraines.

Another inescapable trigger is fluctuating hormone levels. Perhaps this is why female migraines patients outnumber males 3 to 1. 44% of migraine sufferers report that they have more frequent or severe migraines during menses, pregnancy, or menopause.

Tied with hormones at 44% of patients also expressing this as a trigger, intentionally fasting or accidentally skipping a meal is an extremely commonplace reason for migraines to begin. Be sure to set regular meal schedules. If you don’t want to have 3 full meals a day, try eating smaller meals every few hours.

As you will see in a moment, this could be related to the number one trigger. However, fatigue and migraines do seem to go hand in hand. Whether it is fatigue that triggers a migraine or fatigue as a part of the symptoms that a migraine is coming on can be difficult to differentiate. Either way, 45% of people in the study marked fatigue as a trigger.

This may be the biggest surprise of the countdown. At 56%, sound is a far more common trigger of migraines than smells and sights. Any loud noise, whether sudden or consistent, can lead to problems for a migraineur.

It may be the single biggest factor affecting health in advanced nations. It took the top spot of migraine triggers in the study with 58% reporting stress leading to a migraine attack. Differing schools of thought exist on this matter because some report that migraines occur during stressful situations while others say that the migraine sets in as the stressful situation resolves (this may also be referred to as a let-down migraine – and they have destroyed many weekends for people following a stressful work week). While avoiding stress may be impossible, it is important for migraineurs to have good ways to cope with stress (and no, alcohol doesn’t count – see #10).

We promised you our article would end on a positive note, so we’d like to introduce you to a subspecialty of chiropractic care called upper cervical. It’s a gentle alternative that focuses on the top two bones in the spine. These bones protect the brainstem and help to facilitate blood flow to the brain. For these reasons, a subluxation can lead to migraines.

It is no wonder that neck pain is one of the most common migraine symptoms although most people do not associate their neck pain with migraines, especially when they occur beforehand rather than during the headache. However, upper cervical chiropractors are having great success helping patients with both migraines and various headache conditions.

Since adjustments are gentle and long-lasting, many patients find that this is also a cost-effective way to get help for migraines. With how expensive it can be just to get diagnosed with migraines, financial relief can make a big difference for migraineurs.

To learn more about how upper cervical chiropractic care may be able to help you with migraines, contact a practitioner in your local area to schedule a no-obligation consultation. You may quickly find yourself on the road to better overall health and well-being. For some, migraines may quickly become a thing of the past.