The Neurological and Vascular Origins of Migraines

The Neurological and Vascular Origins of Migraines 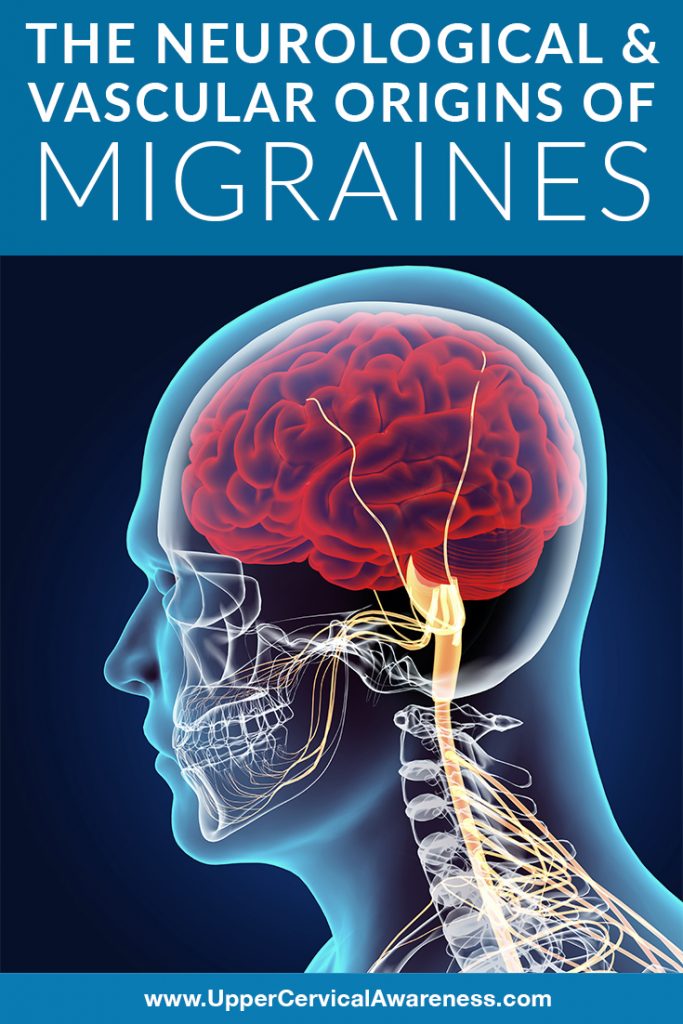 What everyone seems to know most about migraines is that they cause a severe and throbbing headache (most of the time). However, there are a ton of other symptoms that contribute to how debilitating they are. Besides the pain, there is nausea (with the potential for vomiting), sensory sensitivities, dizziness, and more. Whether your episodes last a few hours or a few days, they are sure to put a damper on your work and social life. So what can you do to find natural relief?

We’re going to take a look at two systems of the body that researchers have connected to the onset of migraines. Then we will consider how a natural therapy can help restore problems in these bodily systems so as to provide natural relief.

With that in mind, it is interesting to note that the geneticists found 38 links between migraines and genes, many of these relating to the vascular system of the body. Of course, it has been known for a while that reduced blood flow to certain parts of the brain can lead to migraines. Therefore, it makes sense that they would find this particular link.

Understanding that there is a vascular link is one thing but understanding how these vascular issues develop is another. Let’s look at some interesting facts that show the connection between migraines and the central nervous system.

The medical community is looking at the brainstem to see if there is a better way to care for migraines since malfunctions in this key part of the central nervous system are often involved in its occurrence. Since there are many different things that can affect the function of the nervous system, it makes sense that triggers vary from person to person. For example, here are some common migraine triggers:

Changes in everything from temperature to humidity are known to trigger migraines. In fact, one study revealed that having lightning strikes nearby triggers migraines for some patients.

Bright lights, loud sounds, and strong smells are not just painful for someone who is presently experiencing a migraine attack. They can also be what triggers the next bout for a patient.

Too much stress is a trigger for many different health problems, and this may be related to the hormones the body produces in order to deal with either physical or mental strain. In fact, even when a stressful situation clears up, the sudden reduction of stress hormones can trigger an attack. Thus, stress can get you both coming and going.

Not getting enough sleep or food can both trigger migraines. If you are a migraineur, it is important to have regular schedules for sleeping and eating. Don’t skip meals and try to get 7 to 8 hours of rest each and every night.

This is just a small selection of migraine triggers. Avoiding the ones you can may help you to experience fewer attacks. But what about migraines in general. Is there a way to bolster your central nervous and vascular systems so as to reduce the frequency of episodes further or even to eliminate them altogether?

We would like to introduce you to upper cervical chiropractic care.

When the atlas (C1) is out of alignment, it can affect both the CNS and how much blood is reaching the brain. How?

The atlas surrounds and protects the brainstem. However, a misalignment of the atlas can cause it to place pressure on the brainstem. This, in turn, can inhibit proper brainstem function and lead to migraines.

The atlas is also part of the cervical spine. These bones facilitate blood flow to the brain by providing safe passage for the vertebral arteries. This also means that a misalignment can affect the proper flow of blood. Since an atlas subluxation can affect both of the systems responsible for migraines, it just makes sense to check for a misalignment if you are a migraineur.

Upper cervical chiropractors use modern diagnostic imaging to pinpoint atlas misalignments in a very precise manner. These measurements allow for gentle and long-lasting adjustments. Some patients experience benefits within just one to two adjustments. So if you are looking for natural migraine relief, contact an upper cervical practitioner in your area today.