Home/Fibromyalgia / Chronic Fatigue Syndrome/Should You Exercise During a Fibromyalgia Flare?
Previous Next 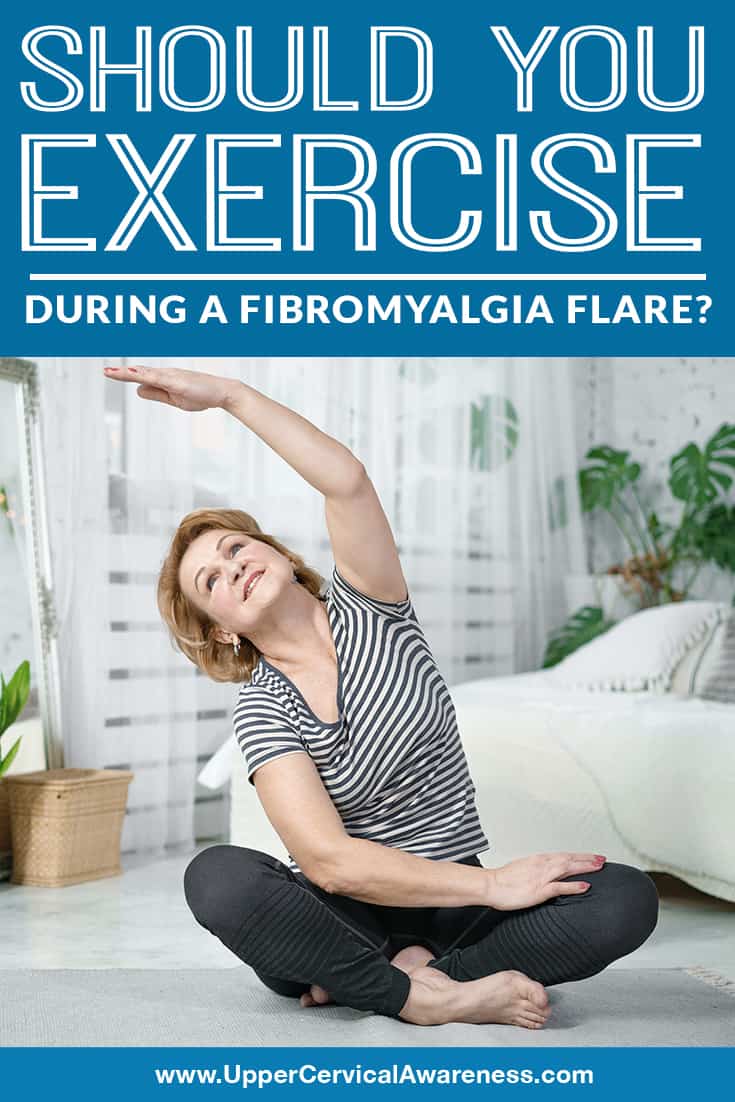 Anyone’s initial reaction to a fibromyalgia diagnosis is either confusion or fear. It’s understandable. Fibromyalgia can be overwhelming and scary if you do not know much about the disorder.

Fibromyalgia (FM) is a chronic syndrome that gives rise to pain all over the bones and muscles, tender points in the body, and general fatigue. Since no medical test can detect or gauge these symptoms, and pain is subjective, misdiagnosis of fibromyalgia frequently happens.

In the past, most people (including doctors) downplayed fibromyalgia and thought of it as a product of patients’ imagination. Thanks to studies, they have shed light upon the matter. Fibromyalgia is real and researchers are drawing close to fully understanding the condition. Even better news, several care options exist to manage the pain of fibromyalgia. Is exercise one of those, or does it make fibromyalgia flare even worse? Read on to find out.

When doctors hear that a patient has fibromyalgia, they may confirm the existence of trigger points or tender spots in the body. These are regions in the body that feel pain with even a mild press or light touch. They are common in most people with fibromyalgia, but not all. At one point, these trigger points were the main diagnostic factor for doctors until they realized that pain fluctuates and changes by the day. Although that’s not the case today, they are still helpful in figuring out the cause of fibromyalgia.

The pain in these trigger points is often dull but constant ache. They are mostly in the following areas:

Experiencing pain for more than three months can make you a candidate for fibromyalgia, especially if you also have these symptoms:

These symptoms can stem from the overreaction of the brain and nerves to normal pain signals.

4 Likely Causes of Fibromyalgia According to Theories

Researchers need to invest more in studies to come up and agree with the single reason why fibromyalgia happens. To date, the definite cause of fibromyalgia remains up in the air. Initial studies consider the following as contributors to the development of fibromyalgia:

As I’ve said, doctors are puzzled about the origin of the widespread pain that fibromyalgia patients go through. The brain is likely lowering pain tolerance for unknown reasons. Another possible cause is the oversensitivity to stimulation of the nerves and receptors in the body. As a result, they overreact to pain signals, exaggerating the pain.

Is It Okay to Exercise During a Fibromyalgia Flare-up?

Here’s the answer you have been waiting for. Yes, it is fine to exercise during a fibromyalgia flare. In fact, the European League Against Rheumatism favors exercise as a primary method to cope with fibromyalgia. You may think it’s strange as most people believe that exercise can worsen pain, but that is just not true.

However, keep in mind that researchers are not urging you to overexert yourself and run a 10K or lift some heavy weights at the gym. Do not get the wrong idea. What they are encouraging are low impact exercises to improve your symptoms.

In case you didn’t know, a sedentary lifestyle can contribute to pain and may increase the discomfort caused by fibromyalgia. How does it worsen chronic pain? Having no exercise for a long time can result in weight gain and may eventually lead to cardiac problems.

What kind of exercises are best for fibromyalgia? These low-impact activities can help: