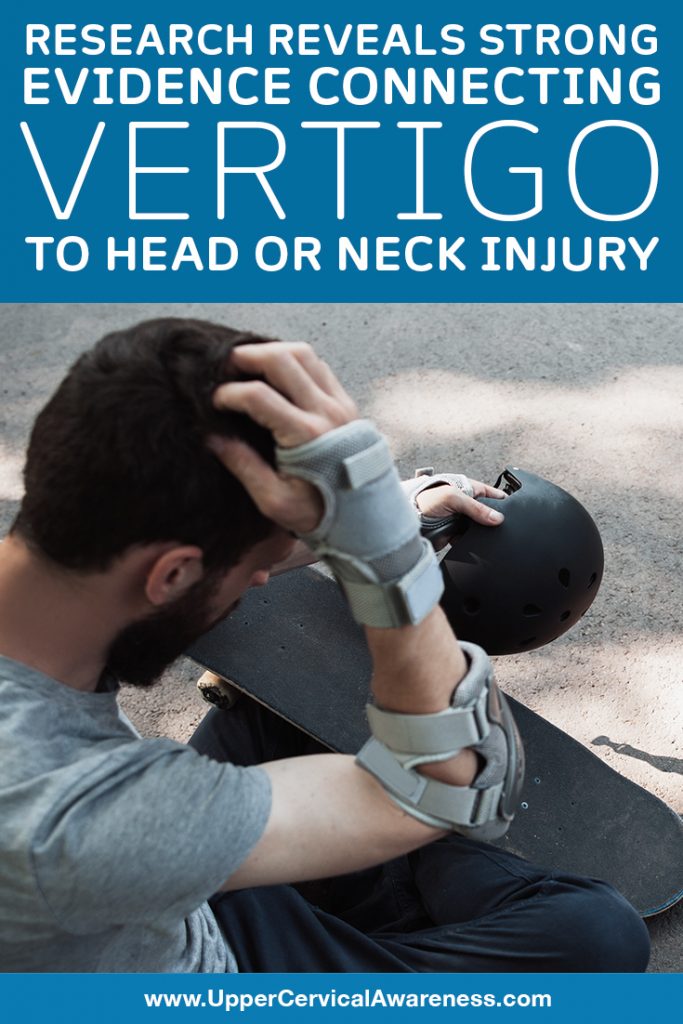 Vertigo is when you experience a false sensation of movement. It can be similar to spinning or twirling. In addition, it can include nausea, vomiting, and loss of balance. Vertigo can also result in suddenly dropping to the ground. Due to the impact these symptoms have on a person’s sense of equilibrium, it can be a totally debilitating condition.

There are multiple options for finding relief for vertigo sufferers.  Usually, treatment focuses on alleviation of the symptoms but not the root cause.  Fortunately, the recent research provided light about the underlying causes, indicating that upper cervical chiropractic care is an excellent and very relevant option for care.

Parts of the Vestibular System

Before diving into the research, it will help to understand more about the mechanics behind the cause of vertigo attacks. First of all, we need to recognize that vertigo is a symptom, not a disease.  It is due to number of disorders, including BPPV (benign paroxysmal positional vertigo), Meniere’s disease, labyrinthitis, or vestibular neuronitis.

Our vestibular system, which is responsible for maintaining and controlling our sense of position and balance, has these key parts:

While this may sound complex, the bottom line is that your brain and body should have uninterrupted communication. This is so your sense of balance system can function at its best.

Vertigo and the Upper Cervical Spine

Your body’s ability to stay balanced relies on the efficient relay of messages passing between the brain and the rest of the body. You may not realize the vital role that the health of your spine plays in their communication. Essential components of the nervous system are actually within the spine bones. Our brain, brainstem, and spinal cord are so important for our body’s total function that bones protect them.

At the top of the spine sits the atlas vertebra, and within here is the brainstem, where the majority of our cranial nerves branch off (including the vestibulocochlear nerve, cranial nerve #8). This is a unique bone in the spine because it has a range of movement that no other bone has in the entire spinal column. The atlas is what gives us the ability to move our heads freely, but this wide range of movement also makes it susceptible to injury.

Impact to the head resulting in neck trauma or an injury caused by repetitive movement could cause the atlas to misalign, causing increased pressure and irritation to the brainstem. Any restriction on the brainstem will distort the signals reaching the brain, causing confusion and a false sensation of motion.  This could be the root behind many vertigo cases.  Upper cervical chiropractic acknowledges this as a major component, and many published research articles give strong evidence in this direction.

Looking at the Vertigo Research

A number of upper cervical chiropractic studies followed the progress of vertigo sufferers using different sources of treatment options.  The results were encouraging and show us that suffering with vertigo isn’t necessary. Certainly, we need to do more than treating symptoms using medications and therapies.

This study focused on the correlation between vertigo onset and head and neck trauma. There were 60 vertigo patients participating in this study and 56 of them remembered having some type of head or neck injury prior to their vertigo symptoms. The cause of the injuries varied from a minor slip and fall to a critical car accident. Some of the participants had suffered from symptoms up to 27 years and stated that they had “tried everything” to get relief, including neck exercises, medications, physical therapy, acupuncture, and so on.

After a chiropractic examination, it was discovered that all 60 patients had an upper cervical misalignment, also called subluxation.  A series of upper cervical chiropractic adjustments followed for all 60 patients. In the end, the outcomes were very positive. In fact, all 60 patients said they experienced either an improvement of symptoms or complete reversal of their condition. Of the 60 patients, 48 of them had no sign of vertigo any longer.  The remaining 12 still had measurable improvement in the severity and/or frequency of their vertigo episodes.

This study focused on 139 patients with Meniere’s disease, which is a condition accompanied by a number of symptoms including debilitating vertigo attacks, tinnitus, hearing loss, and the feeling of fullness in the ear. Meniere’s in a common cause of severe vertigo. Each patient was examined and treated by an upper cervical chiropractor for any atlas misalignments that could be interfering with the necessary brain-body communication.

After six weeks of care, vertigo and the amount of nausea and vomiting that accompanied it decreased substantially. The success rate was astounding, at 98% with 136 of the 139 patients experiencing drastic improvement. These results impacted their all-around quality of life, returning to them the ability to drive a car, perform at work, even sustain a positive marriage. One interesting observation from the study was that it took an average of 15 years from the time of the head trauma before the onset of vertigo and other Meniere’s disease symptoms.

For this study, researchers hypothesized that the origin of vertigo or Meniere’s disease was a result of a whiplash injury to the neck, causing a misalignment in the upper cervical spine. Each patient rated the severity of their vertigo on a scale of 0-10, with 0 being symptom-free and 10 being the worst imaginable.  Prior to the upper cervical adjustments, the average rating for vertigo severity was 8.5.  For clarification, a rating of 5 or above, meant that the person was unable to perform basic functions such as socializing, driving a car, or going to work.

After a six-week period of care, the 8.5 average dropped to 3.  At the end of the study, this average was nearly gone entirely at a rating of 0.8. The improvements provided by upper cervical chiropractic care was life changing for 291 of the 300 patients.

As you can see, a growing body of evidence is telling us that upper cervical chiropractic care can be a revolutionary approach for people whose normal lives are interrupted by crippling vertigo attacks. Upper cervical chiropractors understand the issues that combine to cause vertigo conditions.  If an upper cervical misalignment is the underlying cause of the problem, then this form of care is the beginning of your return to normal function.  Contact us for a complimentary consultation and learn more about how we can help.