Outrageous Things You Need to Know if You Get Migraines

Outrageous Things You Need to Know if You Get Migraines 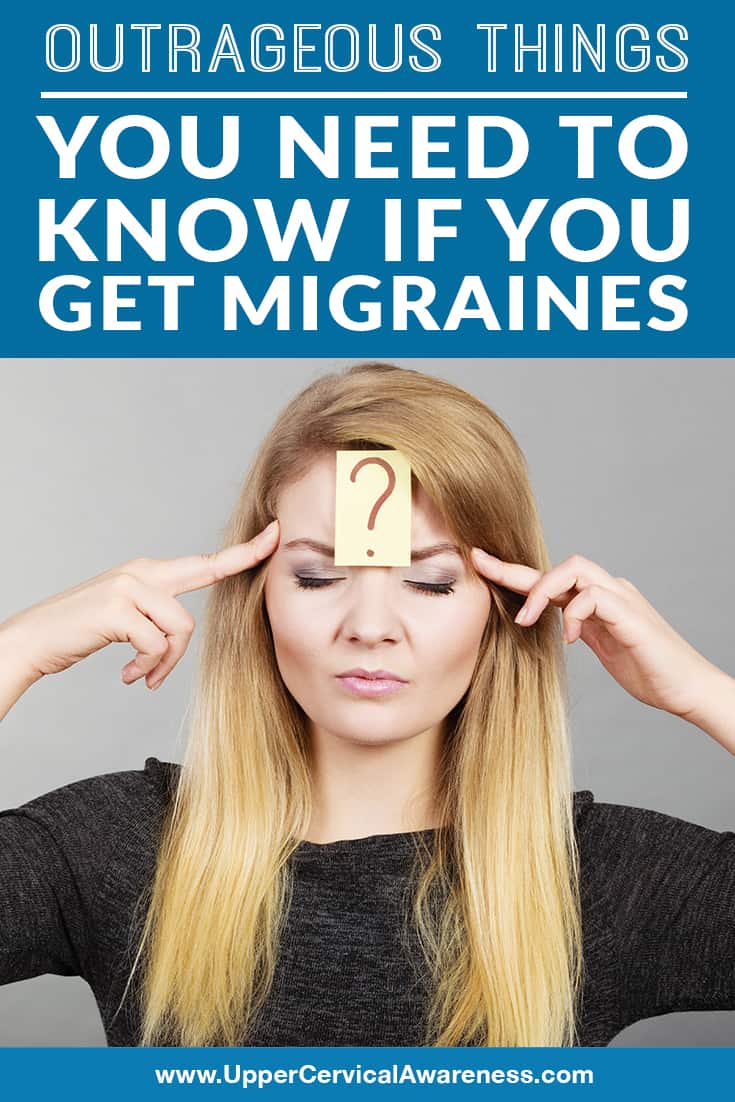 If you are one of the 39 million migraineurs in the United States, or you know someone who is, then this article is for you. We are going to discuss some of the craziest statistics regarding migraines. We will conclude our article by directing you to a natural therapy that has been providing hope for migraineurs who did not think natural relief was possible.

Migraines Are One of the Most Common Illnesses in the World

About 12% of adults and 10% of children get migraines. That translates into close to a billion people! So if you thought you were alone just because you sometimes hear people say things like, “Isn’t a migraine just a bad headache?” know that there are hundreds of millions of people who understand what you are going through.

Being Female Is a Migraines Risk Factor

6% of men get migraines, so it’s not uncommon among men. It’s just that three times as many women get them. Interestingly, the number of boys who get migraines outnumber girls until puberty, so clearly there is a link to female hormone levels. Women also tend to get more migraines during menses, pregnancy, and menopause.

They Aren’t Hereditary, but There Are Genetic Markers

You’re not doomed to get migraines just because your parents had them, but you are at greater risk. Research shows that having one parent with migraines gives you a 50% chance of experiencing them yourself and two migraineur parents increase the odds to 75%. Geneticists blame this on certain genetic markers in the vascular system that may result in less blood reaching certain parts of the brain.

They Can Happen Every Day

If you suffer from chronic migraines, this one isn’t a surprise to you. However, most migraineurs have time between episodes. For about 4 million people, migraines leave little time to recover and occur 15 or more days per month. This can lead to migraines becoming a cause of disability.

Migraines Are Neurological in Nature

They are in the same category of illness as epilepsy, cerebral palsy, multiple sclerosis, Alzheimer’s, Parkinson’s, and many other serious conditions. This, once again, reinforces just how different migraines are from the common headache. It also explains how they can occur without a headache, and why there are so many symptoms. For example, 75% of migraineurs suffer from neck pain either before or during the headache phase.

Too Many Pain Relievers Can Make Things Worse

Most people assume over-the-counter medication is safe because they don’t need a prescription, but you still have to follow the instructions for use that are found on the bottle or packaging. Just about every pain reliever will tell you that they are not for long-term use and that you shouldn’t take them more than a certain number of days in a row. Overuse of medication can actually lead to rebound headaches. This can start a cycle where a person takes more medication to fight the more frequent headaches and an occasional problem becomes chronic.

Migraine Treatments Cost a Fortune in the US

In 2015, migraine treatments cost the US economy $5.4 billion! Approximately one billion of that went on brain scans. These scans cannot be used to diagnose a migraine. They are used to rule out other conditions before giving you an official diagnosis. It is no wonder that researchers estimate a family with a migraineur will spend 70% more on healthcare than a household where no one gets them. This doesn’t even include the $13 billion that migraines cost the US economy when you factor in missed workdays.

Nearly 90% of people with migraines are getting treatment for symptoms rather than receiving care directed at preventing future attacks from occurring. Since researchers can’t agree on what causes them and pharmaceutical companies focus on relieving pain, there is little a doctor can do unless he or she is willing to recommend a natural form of care.

Funding for Migraine Research Is Limited

You would think that the third most common illness in the world would have tons of funding. However, since migraines are not considered fatal, funding goes toward many other less common health conditions that pose a more immediate threat. But keep in mind that migraines can be dangerous. Having them long-term can have permanent effects on the brain. Also, migraineurs have a greater risk of depression and suicide.

Natural Help for Migraines Does Exist

If you suffer from migraines, you may be searching for a natural way to get long-term relief. We would like to introduce you to upper cervical chiropractic care as one possible option. This subspecialty of chiropractic involves a focus on the top two bones in the neck. Since they can have a direct effect on blood flow to the brain and the proper function of the brainstem, this is a potential underlying reason for migraines.

For migraineurs, especially those of you have a history of head or neck trauma, a visit to an upper cervical chiropractor is a must. A consultation may be your first step toward fewer or less severe migraines. Some patients have even found themselves completely migraine-free in as little as one to two adjustment. To learn more, find one of our preferred doctors in your area by using the search feature on this website. We hope this sets you on the path to better overall health and wellbeing.