Migraines — Vascular or Neurological Origins? Are Both Involved?

Home/Migraines / Headaches/Migraines — Vascular or Neurological Origins? Are Both Involved?
Previous Next

Migraines — Vascular or Neurological Origins? Are Both Involved? 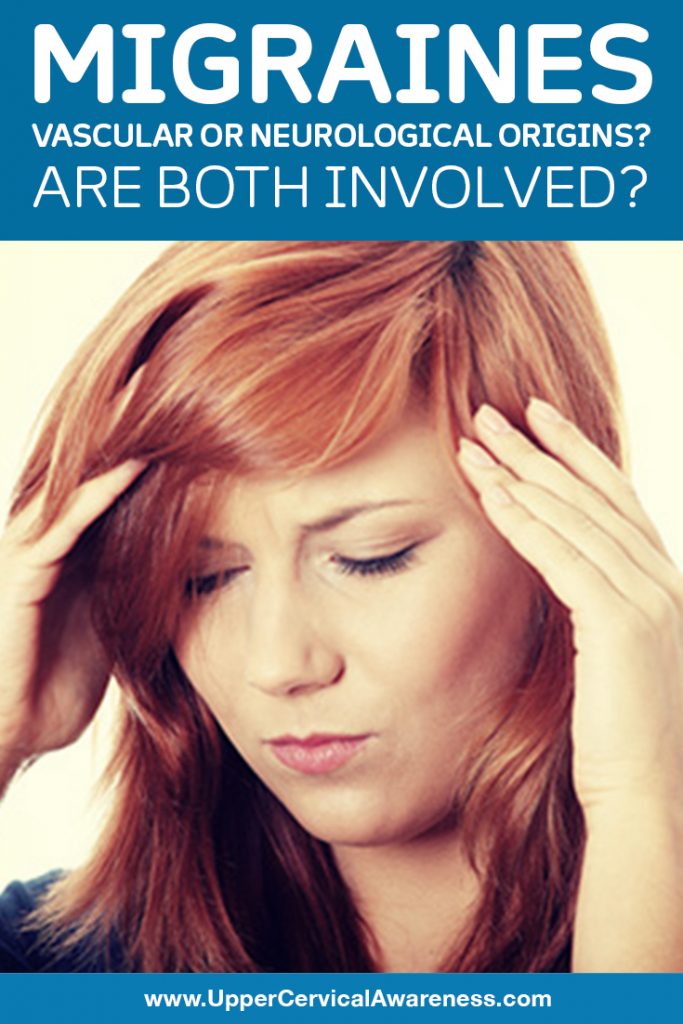 Migraines are known for causing severe pulsating or throbbing pain often only on one side of the head. If you have a migraine, you may also experience nausea and vomiting, extreme sensitivity to sound, certain strong odors, and dizziness or vertigo (a spinning sensation). They can last for a few hours or many days and can cause you to be unable to perform your daily routine until they subside. In some cases, an aura may occur before the migraine attack. This is a set of symptoms acting as a warning that a migraine is about to hit. It can include flashing light, tingling on one side of the face, arm, or leg, or blind spots and vision loss. Auras occur about an hour before the head pain hits. Some people have an aura and never get a full-blown migraine.

Here are some interesting facts about migraines:

As this information shows, no one is immune to the possibility of getting migraines. However, let’s look at some recent information that points to a reason why it may occur.

A Study of Genes in the Development of Migraines

An interesting study has been done shedding some new light on migraines and why they occur. This information is vital when it comes to getting proper care for the pain of migraines. Researchers took a look at hundreds of thousands of people — those with and those without migraines. The purpose of the study was to see if there were genetic differences in migraineurs. Interestingly, the results of the study helped these researchers to find 38 connections to migraines in the genes they looked at.

More shocking was the fact that these genes show a vascular problem connected to the blood supply. This information helps researchers to understand there is a vascular connection to migraines, not just a neurological one as was previously thought. This can help scientists as they try to come up with medications to help ward off migraines.

Medication for Migraines — Is It the Best Solution?

Finding what works to help migraines is frustrating for both doctors and patients alike. Doctors will readily admit finding the right medication for their patients is a shot in the dark. What helps one person may not even touch the migraines of another patient. This is because migraines are as unique as the person suffering from them. It is now known that genetics and environment play a huge role in its onset. This all needs to be taken into consideration when suggesting a particular medication. Sometimes all the factors at play are not recognized by the prescribing doctor.

Geneticists are trying to put patients into certain subcategories in the hopes of finding which medication works best for which patients. However, one simple fact cannot be ignored: medication only covers symptoms. It does not address the problem at its root.

The brainstem is acknowledged by the medical community as the primary component that plays a vital role in the development of migraines. The brainstem and the trigeminal nerve are the major pathways for the body to feel pain. Brain chemicals, such as serotonin, also can contribute to the regulation of pain. All of these are important to take into consideration when looking for a way to care for migraines.

It makes sense then that triggers differ for each person depending on their make-up. One person may have attacks after missing a meal or not getting enough rest while another may experience attacks when the weather changes.

The Brainstem, the Atlas Bone, and Finding Relief

The  C1 vertebra, also called the atlas, is the top bone of the neck. It is designed to allow the head to move in all directions and serves as a protection for the brainstem. However, if this bone moves out of alignment, it puts the brainstem under stress. This affects how the brainstem functions, how it processes pain, and how it regulates neurochemistry. Why does it sometimes move out of place? It can be due to a car accident, a fall, a sporting injury, whiplash, or a concussion. Really, anything that negatively impacts the neck can cause the C1 to misalign.

Upper cervical chiropractors focus their attention on making sure the C1 is in the proper place. To help realign this bone, they use a method that is gentle. It does not require us to pop the neck. Rather we encourage the bones to move back into place on their own, allowing the brainstem to function properly once again. When the brain and the body are back in good communication and proper blood flow has returned, many see a great improvement in their migraines. Some patients see them go away and not come back.