Migraines: Do Weather Conditions Affect Them?

Home/Headaches, Migraines / Headaches/Migraines: Do Weather Conditions Affect Them?
Previous Next

Migraines: Do Weather Conditions Affect Them? 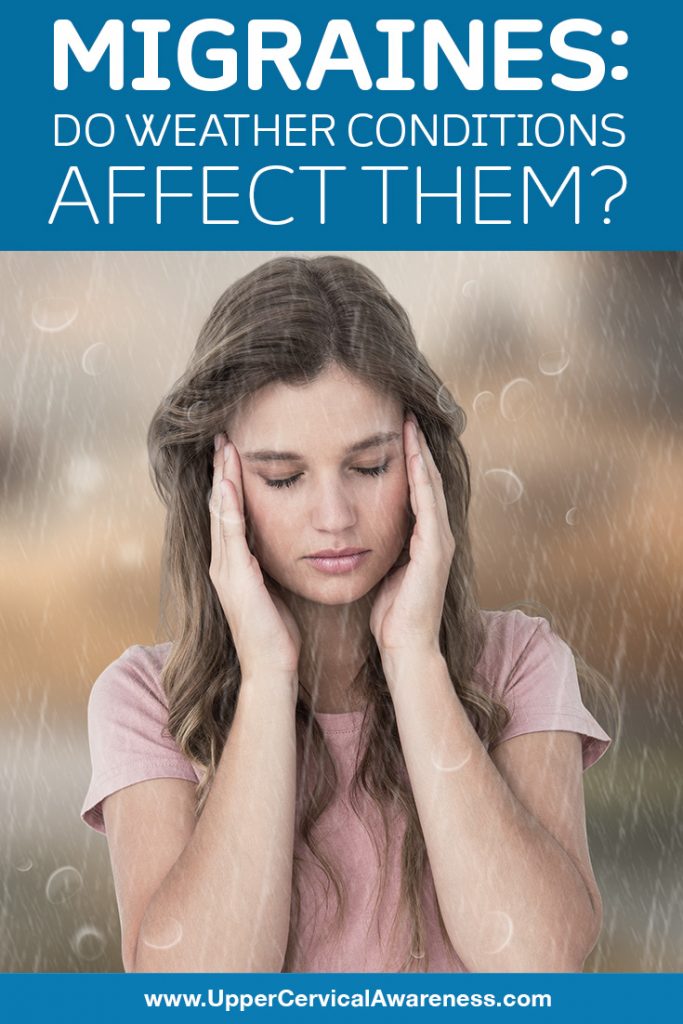 Contrary to popular belief, migraines are not just really bad headaches. They are extreme and consist of a number of neurological symptoms including severe throbbing and pounding pain, sometimes on only one side of the head. However, a third of the people who suffer from the disorder have pain on both sides of the head. Its episodes often last between four and seventy-two hours and may have the following symptoms:

These symptoms are the most common and may be different for each person. Sometimes, individual migraine episodes may produce different symptoms in the same person.

Current thinking about the cause of migraines reflects the idea that the brain and the nervous system play a part. Researchers used to believe that migraine pain resulted from dilation and constriction of blood vessels in the head. However, research has now revealed they are primarily neurological in origin, involving brain chemicals and nerve pathways. Migraine symptoms can change from one attack to the next and suffers can experience more than one type of a migraine. They are known to run in families, but this is not the only reason they occur.

Migraine triggers including anything contributing to an episode where a migraine develops. The triggers do not cause the migraine disorder. However, they increase the frequency with which a migraine is likely to occur. If you are a migraineur yourself, you may have certain triggers that bring about attacks for you. What triggers your attacks may be very different from what triggers your friend’s episodes.

Another factor to be aware of is that triggers do not cause migraines every time they occur. For example, sleep might be a trigger but only if you get too much or too little. Environmental factors are also triggers. These can include weather changes. In fact, out of 120 patients, 82% said the weather triggered their attacks.

If you have ever had migraines linked to weather changes, then you know dark clouds in the sky don’t just indicate a rainy day. You may dread the day knowing it is possible a migraine will occur. Some people even feel as if they can predict when a storm is coming by whether or not they have a migraine.

A study was performed in 2013 at the University of Cincinnati that reported there was a 28% increased risk of migraines and a 31% increased risk of headaches for those with chronic headache disorders on days that lightning struck within 25 miles of their homes. A study out of Japan discovered that 64% of the patients they tracked through a year of storms had migraines when the barometric pressure dropped.

According to the International Headache Society, there are seven triggers for weather-related migraines. These are:

Let’s take a closer look at why these things can trigger migraines.

For one thing, high humidity and extremely dry conditions can bring about dehydration. Dehydration is one of the most common and preventable migraine triggers. Sun glare and bright lights often activate a condition called photophobia – a painful sensitivity to light – among migraineurs. It is not really understood why lightning and barometric pressure have such an intense effect on migraines.

Dr. Stephen Graff-Radford, DDS, the director of the program for a headache and orofacial pain at the Cedars-Sinai Medical Center, gives the following insight: barometric pressure changes may influence the pressure in the brain or the ability of the brain to block pain, but this remains unknown. He continues to state that what is known is overcast, rainy, and cloudy days do bring about more migraines than normal.

As far as lightning is concerned, researchers believe that migraines may occur due to the release of fungal spores or may be related to electromagnetic waves that are emitted from lightning.

If you find this is the case with your migraines, here are some tips to help you decrease the number of episodes you suffer in the future:

Natural Relief for This Neurological Disorder

Another way to successfully reduce migraines is upper cervical chiropractic care. If either the C1 or C2 vertebra has moved out of alignment, it may be putting undue stress on the brainstem, thereby causing improper signals to be sent to the brain. This type of misalignment can also hinder the amount of oxygen-rich blood and cerebrospinal fluid that reaches and leaves the brain.

Upper cervical chiropractors have been trained to use a very specific, gentle method to help these bones realign naturally, resulting in many seeing a reduction in or elimination of migraines.