Migraines Can Increase Your Risk of Developing Heart Disease

Home/Headaches, Migraines / Headaches/Migraines Can Increase Your Risk of Developing Heart Disease
Previous Next

Migraines Can Increase Your Risk of Developing Heart Disease 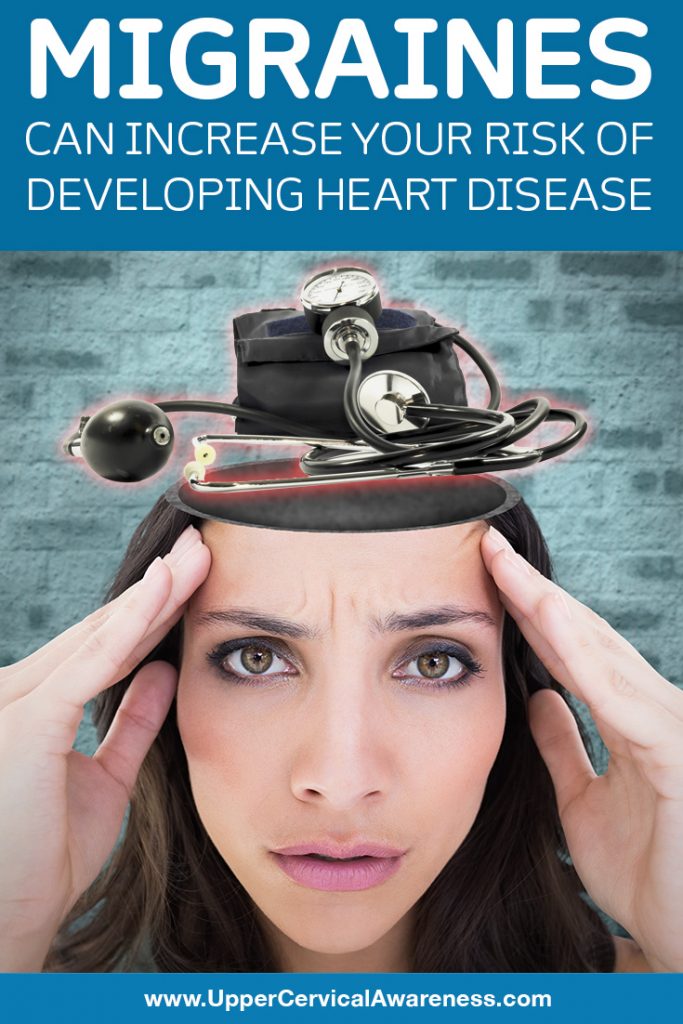 If you or someone you know has ever experienced migraines, then you may understand just how disabling this condition can be. There are a number of symptoms migraines are known to produce, such as throbbing and pounding head pain, nausea and vomiting, visual disturbances, sensitivity to light and sound, dizziness, and numbness and tingling.

In some cases, symptoms are involved without the actual head pain. Approximately 25% of migraineurs experience aura preceding the head pain. This may include seeing stars, flashes of light, zigzag lines, or other neurological symptoms such as loss of feeling in the limbs. Episodes of migraines last between 4 and 72 hours. As many as 39 million Americans and just shy of a billion people worldwide experience migraines, with women having them three times more often than men.

Additional worries come along with having migraines. These debilitating headaches bring with them an increased risk of strokes, heart attacks, irregular heart rates, and blood clots, according to a new study. The study points out that the health risk is highest in the first year after being diagnosed with migraines. However, this risk can last as long as 20 years according to lead researcher Dr. Jasper Adelborg, postdoctoral fellow of clinical epidemiology at the Aarhus University Hospital in Denmark.

He goes on to state there is accumulating evidence that migraines are an important risk factor for most cardiovascular diseases in both men and women equally. The researchers of this study added additional information pointing out that migraines affect approximately 15% of people, mostly women, and are the second leading cause of years lost to disability in 2016.

The study involved collecting records from patients cared for at Danish hospitals and outpatient clinics during the years of 1995 to 2013. This equaled just over 51,000 migraineurs and a little more than 510,000 non-migraine patients used for comparison.

The Notable Results of the Study

Their findings proved that migraineurs more often suffered a number of heart and blood vessel related health problems. According to the researchers, for every 1000 people the following proved true:

Even after considering additional risk factors, such as obesity and smoking, migraines still remained a serious link to these heart problems.

It’s interesting to note when considering the statistics, the absolute risk for all heart-related health problems remains low. The researchers expected this because the patients evaluated in this study had an average age of 35. This tells us that individually the risk of heart attack or stroke won’t necessarily increase dramatically if you suffer from migraines. However, Adelborg said we should take seriously the increased risk for migraines to cause heart problems. He says it translates into a huge risk in the population level because of migraines being so common.

Why Do Migraines Increase the Risk for Cardiovascular Disease?

There does not seem to be a definite answer as to why migraines have link to cardiovascular disease, although some theories exist. For example, cerebral arteries can suddenly restrict when you have a migraine increasing the risk of having a stroke. In addition, when you have a migraine you often lie down for long periods of time until the pain subsides. This can produce blood clots.

Cardiologist Dr. Gerald Fletcher from the Mayo Clinic suspects that migraines and heart problems have link to at least one serious risk factor. He says that this is high blood pressure. According to Dr. Fletcher, migraine patients who want to reduce their risk of cardiovascular disease should take proactive steps in order to lower their blood pressure. Things such as exercising regularly and eating a healthy diet will help.

Another thing that may help is revising the way that people care for migraines. For example, no longer recommending using aspirin or blood thinners to help prevent migraines. This is something that future studies should address, according to Adelborg.

A connection has been seen between migraines and a misalignment in the bones of the upper cervical spine. In particular, the C1 and C2 vertebrae are to blame. These bones add protection to the delicate brainstem. However, due to their shape and mobility, they are also at high-risk to misalign. Something as simple as a trip and fall, a minor car accident involving whiplash, playing contact sports, or any other activity that may lead to a blow to the head or neck or overextending of the neck muscles can cause these bones to misalign.

If these bones have moved out of their original position, a number of things may take place. For one thing, they may act as a hindrance to blood flow and cerebrospinal fluid flow leaving and entering the brain. Additionally, this type of misalignment can put pressure on the brainstem and cause it to send improper signals to the brain. Both of these scenarios can be a reason for migraines.

Upper cervical chiropractors specialize in realigning these bones. We use a gentle method that does not involve any force, such as popping or cracking the spine or neck. Rather, our methods are natural, allowing the body to heal without adding further damage. Once realigned, many of our patients and those in case studies report seeing their migraines improve greatly or even go away completely.