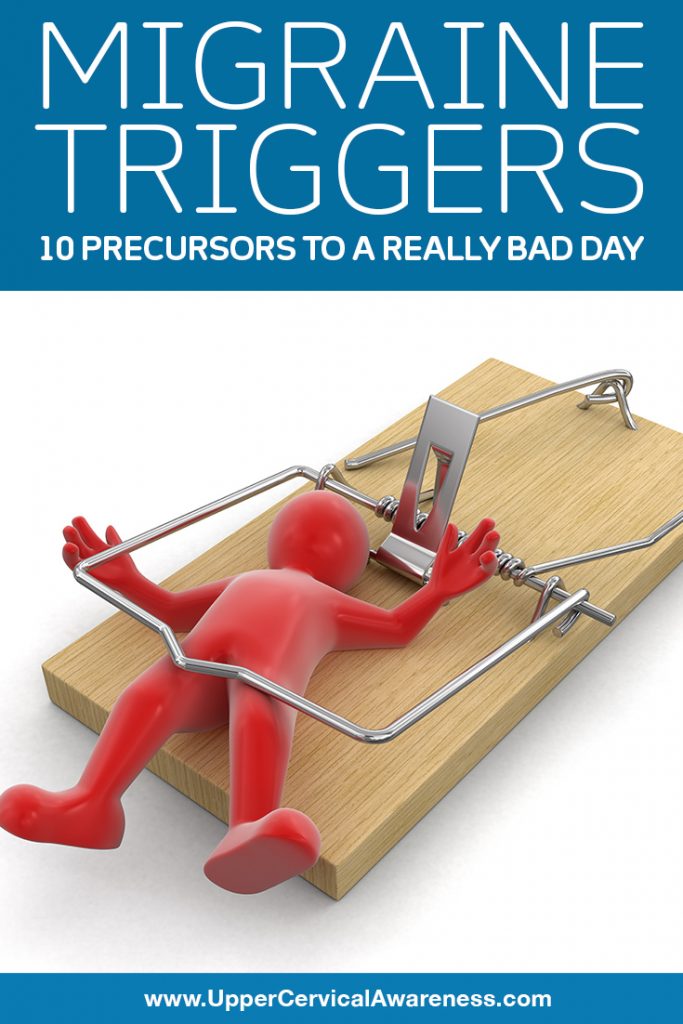 A study that was published in 2014 highlights the 10 most common migraine triggers. We’re going to countdown the top migraine triggers from the least common to the most common. While some of these triggers can be avoided, others are more of a warning that a migraine could happen than a way to prevent the next bout from occurring.

Of course, migraine triggers differ from person to person. So you will still need to keep your own migraine journal to learn what triggers your attacks. However, this list can give you a few things to look for, so you have a place to start.

We won’t leave you without hope either. The article will conclude with a natural way to get help for migraines. For some, migraines have reduced in frequency and severity in as little as one or two visits.

In the study, 27% of patients experienced migraines after drinking. The author of the study was expecting this number to be much higher and posited that it might be certain types of alcohol that lead to the onset of migraines. Another idea may be that it is connected to how well hydrated a person is. Alcohol dehydrates the body, and that can lead to the onset of a migraine. The patients in the study may have just consumed more water than the average person. Either way, migraineurs need to watch their alcohol intake and use moderation.

38% of patients in the study experienced migraines after strong scents. What were the most common culprits? Strong odors coming from cleaning products, perfume, nail polish, gasoline, and paint were all on the list of triggers for patients. Be sure to list strong smells that you come across in your migraine journal to see if this is a trigger for you.

Another 38% of people in the study experienced migraines after visual stimulation such as glare or bright lights. Other visual stimuli that could potentially trigger a migraine include flickering lights and patterns that are contrasting.

Here’s one of the toughest triggers to avoid and it is one of the most common. Weather changes caused migraines in 39% of patients in the study. Weather triggers can include anything from dramatic changes in temperature and humidity to nearby lightning strikes or a drop in barometric pressure. High winds may also bring on a migraine.

Not getting sufficient sleep brought on migraines for 43% of patients. Whether not being able to get to sleep or waking up throughout the night, disruptions to a 7 to 8-hour night of sleep can result in a migraine. How can you help yourself to sleep better if this is a trigger for you? Focus on creating the right environment for sleep with no lights or sounds (unless white noise helps you to sleep). Be careful to avoid mobile device use in bed since some research indicates it can confuse your brain into thinking it is still daytime.

The number of women who get migraines outnumber men 3 to 1, but since this trigger only applies to women, it’s still shocking to see that 44% associated migraine frequency and severity with where they were at in their menstrual cycle. Pregnant women and women approaching or experiencing menopause also often experience more migraines.

Whether a person misses a meal on purpose or unintentionally, it’s still a migraine trigger for 44% of patients. That makes it important for migraineurs to make time for meals, even if it means eating smaller meals more frequently throughout the day. If you are “too busy to eat” today, you may be in too much pain to do anything tomorrow.

This common “trigger” (reported by 45% of patients) is a tricky one. It may have ranked third on the list of most common triggers, but it can also be a symptom of migraine prodrome. In other words, the fatigue is a symptom that the migraine is already building and therefore would not actually be a trigger but a symptom.

This occurs with another thing that many view as a trigger that didn’t even make the top 10 list – food and drink. Other than alcohol, there are no other foods or beverages in the top 10, and with good reason. Food cravings are a common migraine prodrome symptom. A person may crave and consume chocolate, red wine, or other delicacies before a migraine, but it’s actually a symptom and not a trigger. On the other hand, you should still avoid foods you have an allergy or sensitivity to as these may be legitimate migraines triggers.

While sounds ranked the highest of sensory triggers at 56%, the researchers noted that fewer cases were considered regarding auditory triggers. This could have skewed the numbers and made loud, repetitive, and unexpected sounds seem like a more common trigger than they actually are.

The number one trigger is probably no surprise. It’s a trigger for everything from headaches and dizziness to gastrointestinal issues. Migraineurs usually need to find good stress management mechanisms like a hobby, exercise, meditation, talking out feelings, or whatever else works for you.

Relief That Involves More Than Avoiding Every Migraine Trigger

We said we would conclude with hope, and that hope is that there is often a connection between migraines and upper cervical misalignments. As a result, upper cervical chiropractors have found a great deal of success in helping migraineurs by means of precise and gentle adjustments. To learn more, find a practitioner in your area and schedule a no-obligation consultation today.