Migraine Progression: The Full Timeline of a Migraine Attack

Home/Migraines / Headaches/Migraine Progression: The Full Timeline of a Migraine Attack
Previous Next

Migraine Progression: The Full Timeline of a Migraine Attack 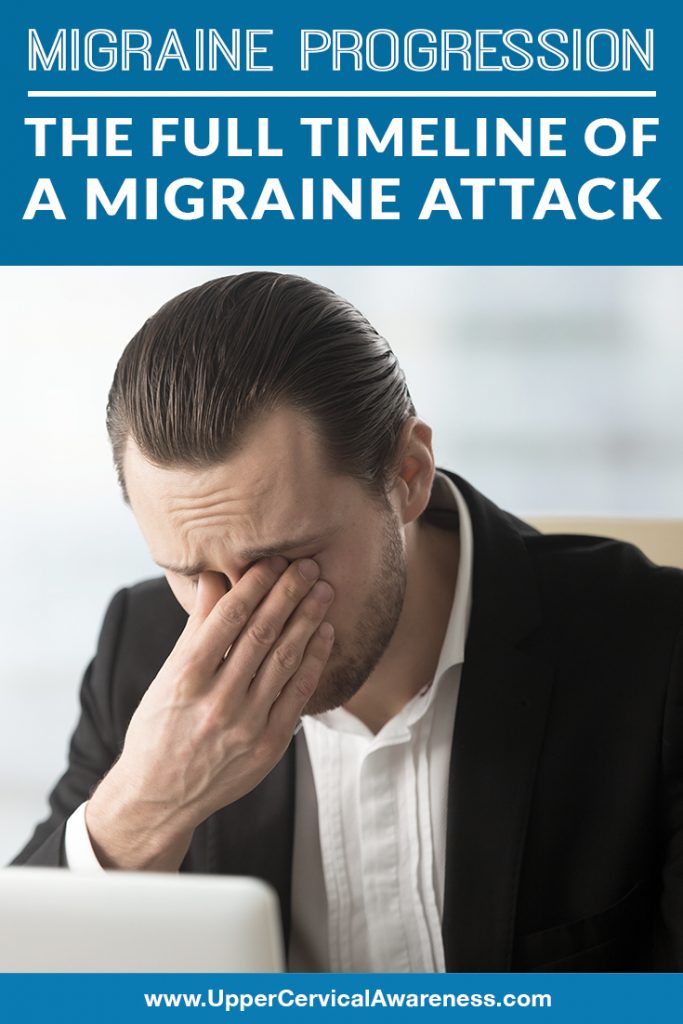 By now, you should have known that migraines are more than your typical headaches. Migraines are a complex neurological disorder that afflicts at least 1 in 6 Americans, according to a study.

It does not only bring a debilitating headache but also causes patients to deal with a series of disabling symptoms. Some of them are visual disturbances, numbness or tingling sensation in the face or extremities, nausea, vomiting, vertigo, and sensitivity to sounds, lights, and smells.

What else can come during an episode of a migraine? Migraine attacks can unfold in stages. It is fundamental for migraineurs to recognize these phases as well as the possible triggers of the attacks to minimize them in the future.

However, keep in mind that migraine episodes can differ for every person, and not all patients go through all these migraine phases.

This serves as the warning sign that an attack may come at any time. It is also known as the “premonitory” or “pre-headache” phase. Symptoms of the prodrome phase can last a few hours to days. This phase brings about the following symptoms:

Learning these pre-headache symptoms can give patients a chance to either prevent an attack or reduce its potential impact. For example, you can take migraine medications before an attack sets in.

The American Migraine Foundation reported that about one-third of migraineurs experience the aura phase in the progression of their attack. However, the aura does not occur all the time. People who experience an aura may go through these:

Like the prodrome phase, a migraine aura can also predict that a migraine attack is just around the corner. Auras can last anywhere between 5 minutes to an hour.

This is the most popular migraine phase and also the most debilitating one. However, the symptoms do not affect the head alone. Other parts and systems of the body may also feel the effects of the headache phase. Patients may experience:

The headache phase may persist between 4 to 72 hours, which can be unbearable for migraineurs.  Many patients prefer resting in a silent, dark room until the headache subsides. Though less common, it is possible to have a migraine attack without the headache phase. This type of migraine is called a silent migraine.

The postdrome stage is also known as the “migraine hangover.”  It occurs 1 to 2 days after the migraine headache. In this stage, patients experience the aftereffects of the episode. Some of the hallmarks of the postdrome phase are:

The prodrome stage can be just as debilitating as the headache itself. As many as 80% of migraineurs suffer from some of these symptoms, the American Migraine Foundation said.

If you live with migraines, you can easily get caught in a cycle of anxiety as you anticipate every time when the next attack might happen. Another cause of concern for you might be the long-term implications of medication use.

Have you heard about upper cervical chiropractic? If not yet, we urge you to consider this branch of chiropractic. It has been helping thousands of migraineurs in case studies get back to their migraine-free life.

Upper cervical chiropractic care concentrates on the most critical yet vulnerable area of the spine – the C1 and C2 vertebrae at the junction of the head and neck. The topmost bones of the upper cervical are crucial for two reasons:

The C1 and C2 vertebrae offer a layer of protection for the brainstem and make possible the movement of the head in any directions. However, its flexibility contributes to its vulnerability to misaligning.

Misalignment of either the C1 or C2 vertebra compromises the functions mentioned above. The end result is the onset of migraine symptoms. Often, spinal misalignments are the undetected underlying cause of migraines and other neurological conditions.

If you are experiencing migraines and have never gone to an upper cervical chiropractor for a spinal assessment, here are your next logical steps.

Finding out and correcting problems in your upper cervical spine might be the solution to the lasting relief you’re looking for.