Home/Migraines / Headaches/Migraine Aura Symptom: What is Transient Aphasia?
Previous Next 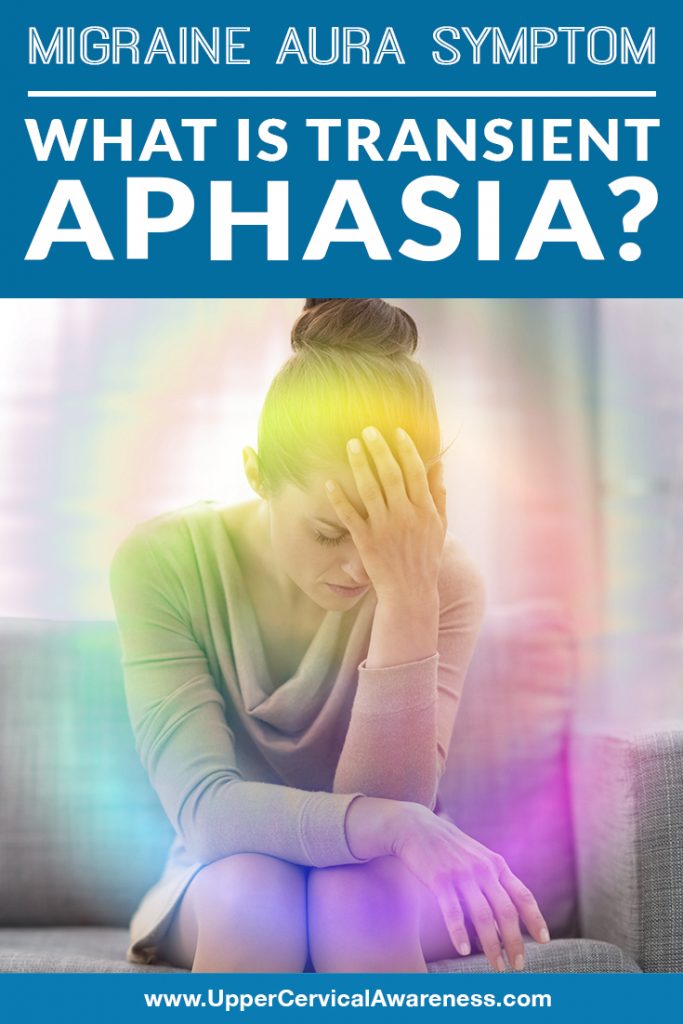 Migraine with aura, also referred to as the classic migraine, is a recurring headache that appears after or during sensory disturbances called an aura. These disturbances or “auras” consist of blind spots, flashes of light, and other vision changes. This condition also includes tingling in your face or hands.

Aura frequently appears about five to sixty minutes before the incoming pain of a migraine. An aura is almost like a series of warning signs. According to the American Migraine Foundation, migraine with aura occurs in about 25 to 30 percent of individuals who experience migraine attacks.

What Is Transient Aphasia?

Transient aphasia is a lesser-known migraine with aura symptom. It is not often talked about. As a result, not many people know about this condition.

Transient aphasia is a condition that causes a temporary inability or decreased ability to speak, comprehend, or read. When this occurs, you may gradually or suddenly experience extreme difficulty to speak or understand what others are saying. In addition, there is also the trouble reading or writing, and sometimes, even analyzing math-related puzzles. The severity of warning signs can be different from person to person and even in-between attacks.

What Can Cause Transient Aphasia?

There is one theory behind the cause of transient aphasia. It traces back to a peculiar electrical wave in your brain called spreading cortical depression. This wave is the same process that triggers visual aura symptoms. The wave interrupts the normal flow of electrical currents between your neurons. As this effect spreads widely throughout the brain, the brain becomes confused by the messages received from the abnormal electrical signals.

The spreading cortical depression seems to push forward to aura symptoms, like seeing images that aren’t there. If the electrical wave spreads to areas of your brain related to speech, then it’s even more possible that you will experience trouble with your language and speech skills.

Broca’s area of the brain is responsible for the ability to express language—to speak words or create sentences. Wernicke’s area manages the capability to understand or comprehend languages. When these brain regions get affected during a migraine with an aura attack, you may have difficulty understanding other people. Even when you can still speak, your words will become less likely to make clear sense.

Who Suffers From Transient Aphasia?

Anybody can experience transient aphasia as part of their migraines with aura. However, it’s much more likely to occur in people who already have a history of visual aura. You most likely won’t experience aura with every migraine attack. Also, as you get older, your migraines may change.

In general, migraine impacts women more predominantly than men. So, they are more likely to have transient aphasia. The reason for this is that changes in hormone levels influence migraines. It also explains why migraine symptoms change after pregnancy. It’s also quite common for older women in their years before menopause to suffer an uptick in migraine with aura.

When Do You Need To See Your Doctor For Transient Aphasia?

Transient aphasia symptoms during migraine with aura should reverse entirely on their own and won’t cause any permanent damage. However, when you are having difficulty with your speech and language skills for much longer, it can be a warning sign of other severe conditions that require immediate attention.

What are these conditions that need urgent medical care?

The clear danger here is the possible arrival of a stroke. How do you detect if this is the case?

If any of these two severe warning signs appear anytime. You should seek immediate medical attention as these are possible signs of an oncoming stroke.

How Do You Prepare For Contingencies Concerning Transient Aphasia?

Living with migraines can be unpredictable for many people, even more, if you experience aura symptoms like transient aphasia which can interrupt your life.

You can do a little planning in case of an attack:

Living with migraine with aura symptoms like transient aphasia is very complicated and at times very scary. Coordinate with your doctor to rule out other conditions with similar symptoms and to obtain a treatment plan. Once seizures and stroke are no longer an issue after a complete check-up, then we can reach the diagnosis of migraines with aphasic aura.

What happens when there is a misalignment in the upper cervical area? The brainstem and spinal cord are put under pressure, causing them to malfunction. Instead of sending the correct signals to the brain and other parts of the body, they do the opposite. The slightest misalignment in the atlas may cause a chain reaction of problems that will affect the entire body. It can hinder the flow of blood and the cerebrospinal fluid. These malfunctions set up the environment for migraines and transient aphasia to appear.

Take that step towards a safer way of dealing with your migraines and transient aphasia. Search for the nearest upper cervical chiropractors in your area for help. They will take care of any misalignments in your upper cervical spine. As a result, they assist in restoring your body’s optimum health levels. Once properly realigned and corrected through a gentle and safe procedure, you can begin healing just like the patients in many case studies. They are delighted to discover that their migraine attacks either go away entirely or at least decrease in frequency and intensity.