Menstruation and Migraines: Explaining the Link Between the Two

Home/Migraines / Headaches/Menstruation and Migraines: Explaining the Link Between the Two
Previous Next

Menstruation and Migraines: Explaining the Link Between the Two 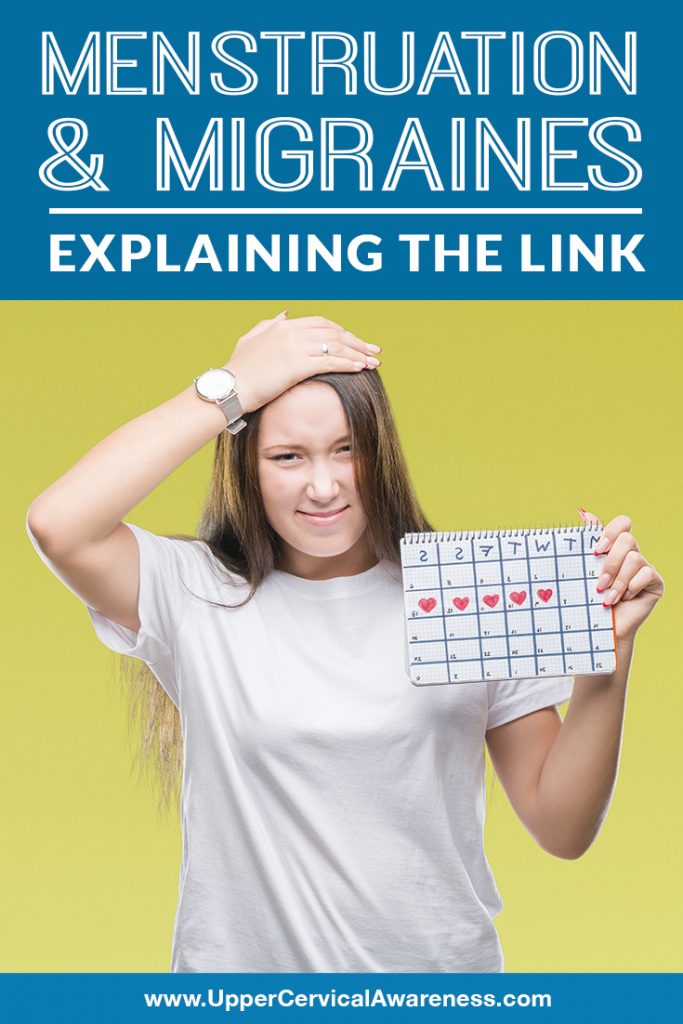 Menstrual migraine is the term given to women living with migraines who experience fewer migraines when ovulating and more during their period. What is the link between the menstrual cycle and migraines?

While 12% of people get migraines, the number of women outnumber men three to one. In this post, we’re going to address the link between fluctuating hormones and migraines. Then, we will provide you with a possible way to significantly reduce the frequency and severity of migraines.

Symptoms of Migraines When Ovulating

When a person suffers from migraine with period, migraines probably occur at other times of the month besides just in connection with the menstrual cycle. However, this neurological condition tends to get worse during certain parts of the monthly cycle for women.

There are several symptoms that you may already be experiencing due to menstruation. These symptoms can include:

It is important to note that some of these symptoms are overlapping symptoms with migraines. So, if you are living with migraines, it can be tough to know which symptoms are due to your period and which are being caused by the neurological condition. Other common migraine symptoms include:

As if this list was not enough, we need to add symptoms that seem to be unique to migraine with period. For example, women who suffer menstrual migraines tend to experience fewer migraines while ovulating but more around the time of their period. You may also tend to have a more severe headache and greater light sensitivity at this time of your cycle. The migraines will also tend to last longer during your period than episodes you may experience at other times of the month. The most common of the crossover symptoms is nausea, which can become severe enough to cause vomiting. Menstrual migraines can present with or without aura, and the frequency of aura tends to be about the same as for patients whose migraines are not related to their menstrual cycle.

Diagnosing migraine with period is similar to diagnosing migraines in general. The doctor will look for two of the four primary headache symptoms noted in the list above. However, this is not a foolproof diagnostic tool for migraines because only 85-90% of migraines present with a headache.

The Link Between Migraines and Hormones

Researchers believe that the link between migraines and menstruation have to do with a sudden drop in serum estradiol triggering attacks. Your period is not the underlying cause of your migraines. However, the sudden changes in hormone levels are a trigger for the episodes, so they get more frequent or severe during this part of your monthly cycle. Since these hormone changes have a sudden effect on serotonin levels, there can be significant neurological changes.

We should also mention at this time the connection between migraines and menopause. During perimenopause and menopause, migraines may grow increasingly worse. The good news is that in such cases, migraines are likely to reduce in severity and frequency after menopause.

Since most women experience a day or two before their period begins or within three days after it starts, some websites recommend taking NSAIDs around the time of menstruation for preventative reasons. However, it is essential to note that this more of a form of symptomatic care than actually preventing migraines from occurring. Also, taking NSAIDs or other pain relievers too frequently can result in rebound headaches, so you probably want to save this form of acute symptomatic treatment for when you need it most.

Searching for the Cause of Migraine with Period

Since hormone fluctuations are a trigger source for migraine and not an actual cause, this still leaves patients with limited options for taking preventative measures against the attacks. Therefore, we would like to introduce you to a commonly overlooked factor in migraine occurrence – an upper cervical misalignment.

We mentioned neck pain earlier among common migraine symptoms, but did you know that it is one of the most common symptoms with about 75% of migraineurs experiencing neck pain either before or during an attack? There are several reasons for this, including the effects that an upper cervical misalignment can have on the brainstem, on cerebral blood flow, and on cerebrospinal fluid drainage.

Since the proper alignment of the atlas and axis (C1 and C2 vertebrae) are critical to the neck and overall spine health, some chiropractors focus on adjusting only these two bones. This therapy is called upper cervical chiropractic, and it has been able to help some patients to reduce their migraines by mitigating these underlying factors.

Regardless of the triggers of your migraines, you need to go after the underlying problems in the central nervous system to get long-term relief. Upper cervical chiropractic can help by providing safe and precise adjustments for the C1 and C2. Patients receive personally tailored care, rather than a generic adjustment. The gentle adjustments do not involve any popping or twisting of the neck. Diagnostic imaging is used to calculate a specific correction for each patient. To learn more, contact a practitioner in your area today and schedule a no-obligation consultation.