How Sleeping Disorders Are Connected to Upper Cervical Health

How Sleeping Disorders Are Connected to Upper Cervical Health 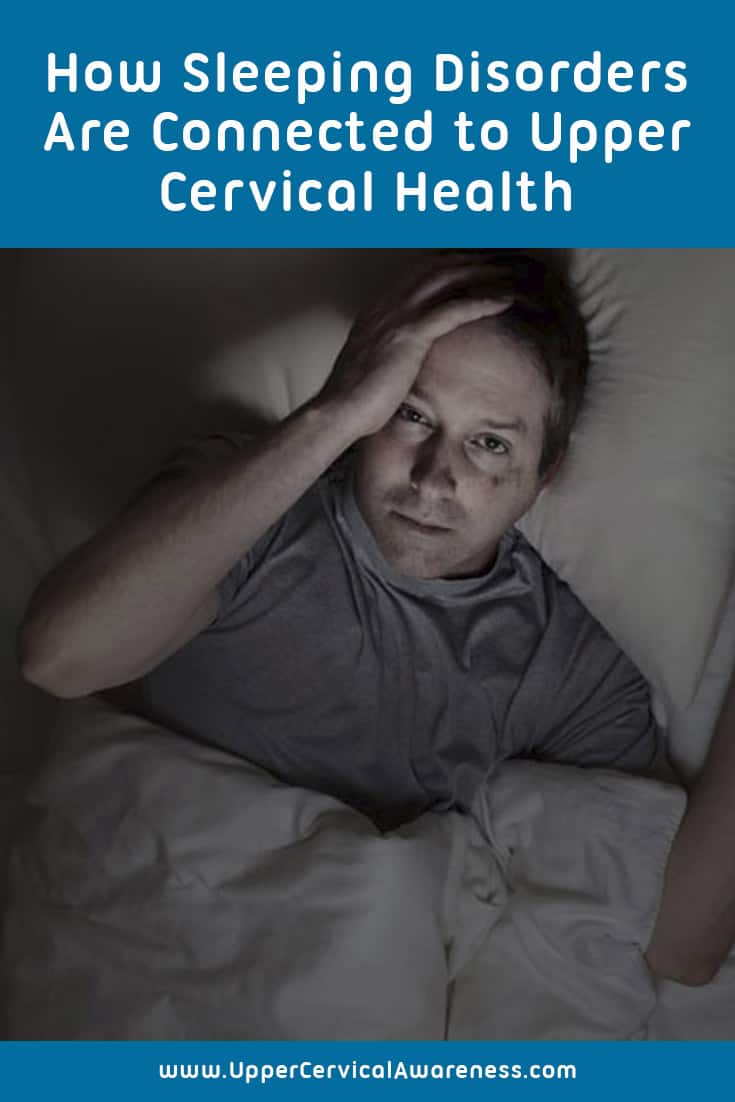 Sleeping disorders come in many different varieties, but they may have one common underlying factor. The health of your upper cervical spine is connected to how well a person sleeps. We’re going to take a closer look at the different types of sleeping disorders. Then we will discuss upper cervical chiropractic as a natural way to help you get better sleep.

While these are not the only types of sleeping disorders, they show the problems that exist related to sleep.

All of these difficulties in sleeping can actually go back to the same issue – inhibited brainstem function. Why is this the case?

The Link Between Sleep and Brainstem Function

There are actually a number of factors that link the brainstem and sleeping. First of all, the brainstem is the source of the majority of the body’s involuntary functions. Those include two functions that are very important when it comes to sleep:

Because of these factors, research has been performed involving the connection between OSA and the cervical spine, among other central nervous system and sleep links. What part does the cervical spine have when it comes to the brainstem?

How the Cervical Spine Relates to Brainstem Performance

The fact is that cervical spine alignment and brainstem performance go hand in hand. This is clear without having to have a great grasp on anatomy. There is just one simple factor that needs to be understood. The C1 vertebra (atlas) is the top bone in the neck, located at the base of the skull. It surrounds and protects the brainstem, right where it meets up with the spinal cord.

With that in mind, it becomes clear how an atlas misalignment can affect brainstem function and thus lead to sleeping disorders. Even the slightest misalignment of the atlas can turn the vertebra from a protector into a source of compression, irritation, or pressure. As a result, the body may cease to breathe properly during sleep, or the processes of falling asleep and waking up may become inhibited.

It is therefore vital to correct an atlas misalignment if a person is suffering from a sleeping disorder. In one case study involving upper cervical chiropractic care, a 23-year-old man had symptoms including everything from sleep dysfunction to bipolar disorder resolve after just 7 months of care. Again, this reveals the link between upper cervical health and sleep disorders.

If you are suffering from a sleep disorder, upper cervical chiropractic care may be the cost-effective and gentle help that you have been searching for. The patient in the study noted above had suffered an injury prior to the onset of symptoms. The injury is likely what caused the misalignment. It doesn’t mean you must have suffered a head or neck injury for upper cervical chiropractic to help. It just means that an injury that occurred, even one going back 10-15 years, may have caused the underlying issue, so be sure to include things like that on your patient history.

Schedule a consultation with an upper cervical chiropractor near you to discuss if this is the right way to get some natural relief. A few gentle adjustments may be the secret to getting better sleep and feeling refreshed throughout the day. That can mean an entire change in your life if a sleep disorder has been affecting your day-to-day activities for some time now. So don’t delay in getting on the path to better health.