How Fast Does Meniere’s Disease Progress?

How Fast Does Meniere’s Disease Progress? 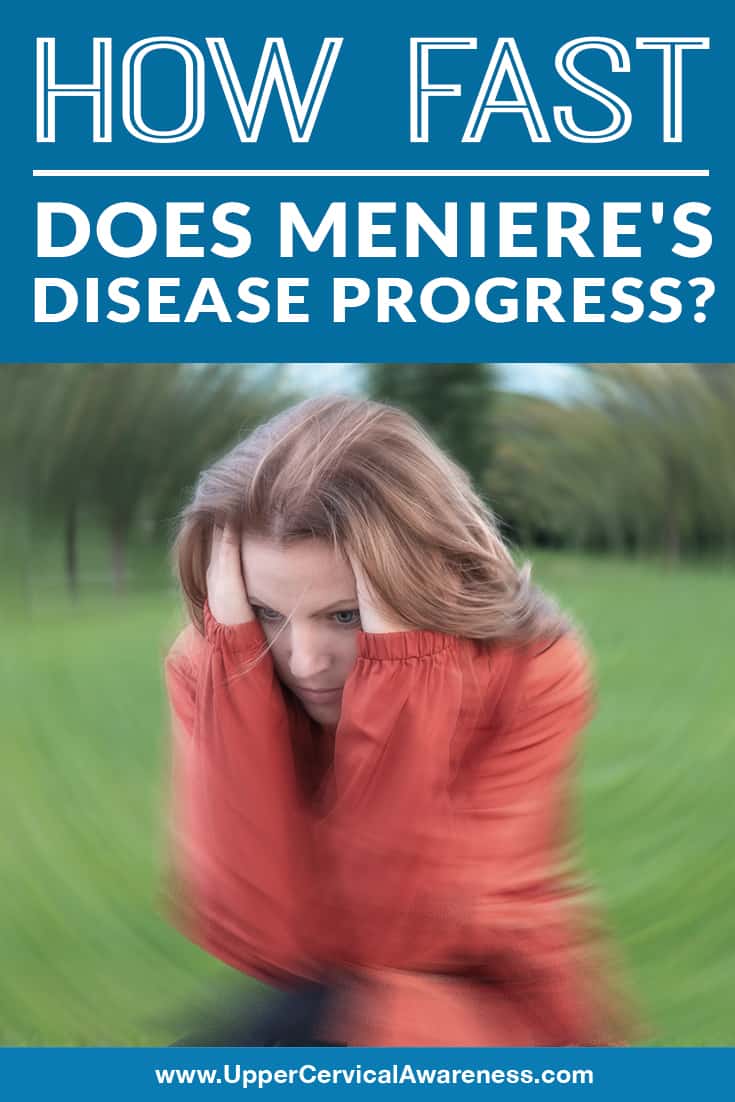 Meniere’s disease is a continuous inner ear (vestibular) disorder. What exactly is it anyway? It is a type of endolymphatic hydrops that produces a collection of persistent symptoms due to an excessive amount of fluid (endolymph) that builds up in the inner ear.

A Quick Back Story About This Condition

Here is a quick historical background about this subject. In 1861, a French physician, Dr. Prosper Meniere, had a theory. He stated that this disease could cause vertigo attacks (a fake spinning feeling), irregular hearing loss, and tinnitus (loud ringing in the ears). He also believed that these symptoms originate from the inner ear and not from the brain, which was the prevalent theory. Later on, more people in the medical community thought that Dr. Meniere’s opinion was probably the correct one. Thus, it became more and more accepted. As a result, Meniere’s disease started to become associated with this illness and inner ear balance problems.

Meniere’s disease usually begins with fluctuating hearing loss and may become worse, causing dizziness and worsens into vertigo episodes. Also, typical attacks have an aura (it is a specific set of visual warning signs).

If you can pay attention to these signs when they start, you can get to a comfortable and safe place to prepare and cope with the attack. Auras can give you a clue when an attack is about to happen.

Watch out for these classic Meniere’s disease symptoms:

Some Possible Causes Of Meniere’s Disease

This disease is still shrouded in mystery among the practitioners in the medical community. They do not know the exact cause of this illness. However, here are some theories on why it happens:

Even most experts cannot agree on exactly which approach is the most accurate, but there is one theory that at least most researchers and doctors agree upon. It states the attacks happen because of an increase of pressure caused by excessive deposit of endolymph in the inner ear or because of potassium crystals in the region of the ear where they should not exist. They also believe that this may occur due to a small rip or damage in the membrane that separates endolymph from another inner ear fluid known as the perilymph.

In many cases, people get Meniere’s disease when it becomes triggered by specific situations or events, such as:

Just stating common symptoms of Meniere’s disease will not let you see the big picture of this particular condition. There are different stages. Each stage contains varying symptoms that can happen before, during, between, and after each phase of attacks. Finally, there is also that period called the late-stage of Meniere’s disease.

These symptoms are present in the initial stage:

After an attack, you may start to feel exhausted. As a result, you would tend to fall asleep for many hours to recover.

Sometimes, some individuals may remain symptom-free. Other times, they may show many symptoms from the list. These symptoms also vary significantly from person to person. Symptoms may consist of some or all of the following on this list:

This stage refers to a series of symptoms rather than the duration of time it occurs. At this stage, hearing loss is more significant and fluctuates less often. Thus, it becomes regular. Tinnitus and congestion of the ear become worse and more consistent. More severe struggles replace vertigo with balance and vision problems. You may also start to experience drop attacks (suddenly falling to the ground while conscious). These symptoms in late-stage Meniere’s can be intensified and triggered by low lighting, being very tired, or becoming exposed to visually stimulating environmental situations.

The collection of attacks caused by Meniere’s disease can last anywhere from 20 minutes to 24 hours. Also, it is possible for these series of attacks to happen repeatedly over a few weeks, months, or even a few years. This condition is just so unpredictable. People with Meniere’s disease are exasperated, angry, afraid, anxious, and depressed to deal with it. Therefore, there is no guaranteed way to manage it effectively because of its unpredictability and wide array of symptoms. As a result, even researchers and doctors become frustrated with this disease. However, do not despair, because there is hope. You have to look in the right places to find what you need.

There is Hope! A Natural Relief for Meniere’s Disease

There was a clinical study conducted with 139 Meniere’s disease patients. All of the 139 patients, upon check-up and examination, showed a misalignment in the bones of their upper cervical spine—either the C1 (atlas) or C2 (axis) vertebra. Each of the patients remembered having some injury or trauma to their neck or head in the past. Some experienced the trauma in their recent history, and others had it decades ago. Finally, the patients received custom-tailored spinal adjustments according to their specific needs. Out of the 139 people, 136 saw significant positive results and reduction in their various symptoms, especially in their vertigo attacks.

Upper cervical chiropractors employ a technique similar to the one used in the research to help patients with Meniere’s disease. Therefore, we will never do any popping, twisting, or cracking of the neck or spine. Instead, we use a technique that is highly gentle, safe, and precise. It is a natural way of encouraging the bones to move back into place. As a result, this provides longer-lasting adjustments and significant improvement in Meniere’s disease symptoms after only a few spinal alignments.

Take the first steps toward healing today, and consult with an upper cervical chiropractor.