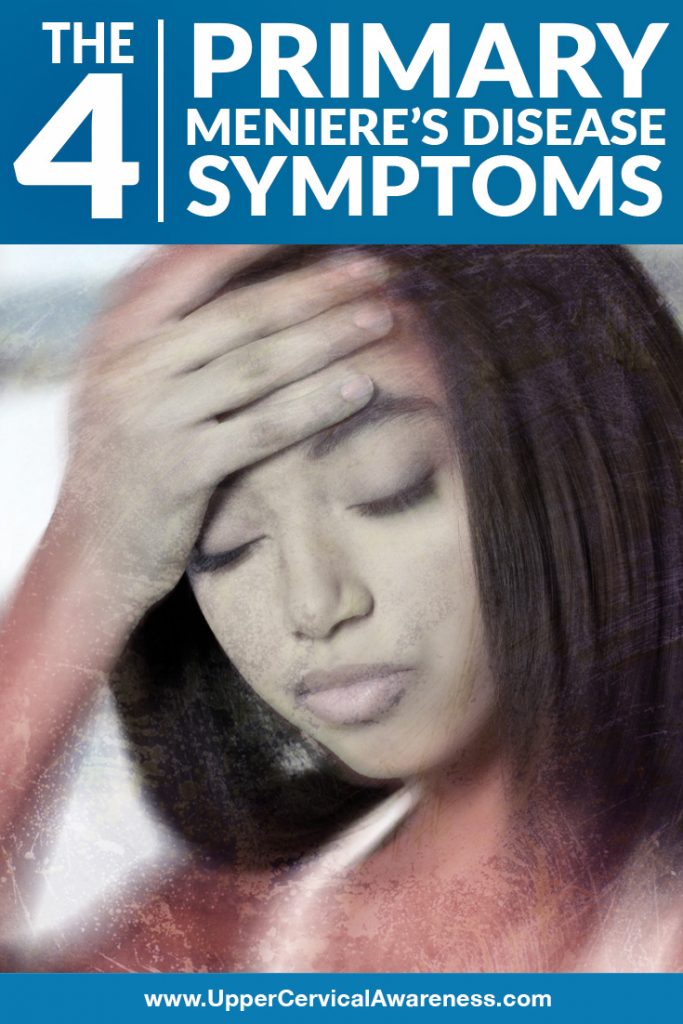 Meniere’s disease is a rare vestibular condition that affects over 600,000 people in the US alone. With tens of thousands being diagnosed each year, more people are becoming familiar with this debilitating syndrome. However, Meniere’s disease remains misunderstood by some. With that in mind, we’re going to take an in-depth look at the four primary Meniere’s disease symptoms. This will allow us to pinpoint a potential Meniere’s disease causes, and a natural way to relieve this underlying condition.

Vertigo is a common symptom of many different conditions including BPPV (benign paroxysmal positional vertigo), MS (multiple sclerosis), vestibular neuritis, labyrinthitis, and an acoustic neuroma. However, vertigo that due to Meniere’s disease presents in rather specific ways. Thus, it is an integral part of getting a Meniere’s disease diagnosis.

In order to diagnose Meniere’s disease, a doctor will ask about your history of vertigo. You must have had at least two vertigo attacks (although many patients experience vertigo on a regular basis). These attacks must last for at least 20 minutes at a time but no more than 24 hours. Shorter bouts of vertigo likely indicate positional vertigo. Whereas longer bouts of vertigo can signify things like a serious case of mal de debarquement, which occurs when a person experiences vertigo following a long boat or plane trip or an amusement park ride.

Tinnitus is a ringing or other sound that occurs in the ear when there is no external source of sound. Tinnitus is another common symptom and can be present in many different conditions. For example, if you go to a loud rock concert, you may notice a ringing or buzzing sound in your ears when you lay down to go to bed that night. However, tinnitus exhibits itself in particular ways when it has something to do with Meniere’s disease.

First of all, in almost all cases, Meniere’s disease affects only one ear. Second, tinnitus may vary from patient to patient and flareup to flareup of the condition. In fact, according to one study, about a third of Meniere’s patients experience mild tinnitus, one third experienced moderate tinnitus, and the other third experienced severe tinnitus. The interesting part of the study was that increased severity of tinnitus was associated with a higher risk of drop attacks (when a sudden bout of vertigo causes a fall). Therefore, severe tinnitus may cause a greater risk of falls due to Meniere’s disease episodes. Doctors also suggest that more severe tinnitus is due to a more advanced form of Meniere’s.

Fluctuating hearing loss is commonly a sign of Meniere’s. Thus, a hearing test is an important step in getting a Meniere’s disease diagnosis. What are doctors looking for in such a test? As Meniere’s progresses, hearing loss becomes more substantial. In the earlier stages of Meniere’s, a patient will likely show hearing loss in only low-frequency tones. As the condition progresses, the highest-frequency tones are also lost. Therefore, a patient who shows sufficient hearing in the mid-range only is likely to have had Meniere’s longer.

Hearing loss due to Meniere’s can be due to surgeries that certain patients with severe or advanced cases of this syndrome have to go through. Some of these surgeries are destructive. Many of the surgeries have a success rate of as low as 70%. They can also leave up to 30% of patients deaf in the ear the surgery is performed on (although 15-20% of these patients may have already experienced hearing loss in the ear prior to surgery according to some research sources). Either way, the low success rate and high risk of permanent hearing damage turn most patients off to these extreme options.

#4 A Feeling of Fullness in the Affected Ear

Meniere’s disease patients can often identify the ear that is suffering from the condition most readily by the feeling of fullness in the ear that presents during an attack. This may be due to an overabundance of fluid in the ear which leads to the sudden onset of more severe symptoms. This excess of fluid is called endolymphatic hydrops. While researchers once thought this to be the primary Meniere’s disease cause, it is now acknowledged that the true cause is whatever is leading to the excess fluid and not the existence of the fluid itself. Some of these potential causes include:

Upper cervical chiropractic research into the benefits of gentle adjustment to correct misalignments (often caused by head or neck trauma) have proven promising. Let’s take a closer look at how the neck may reveal the underlying issue when it comes to Meniere’s disease.

The top two bones in the neck protect the brainstem. Thus, a misalignment may affect brainstem function. These bones also help to facilitate blood flow to the brain. Again, even the slightest misalignment may affect this normal function. Perhaps most important, however, is the proximity of the C1 (atlas) to the ears. A misalignment here can create the right environment for a gradual decline in Eustachian tube function. As a result, patients who exhibit symptoms of Meniere’s often do so approximately 15 years after whiplash-type injuries.

Once the underlying misalignment is corrected, many patients report a significant decrease in the severity of symptoms, particularly vertigo and hearing loss. If you are suffering from Meniere’s disease and would prefer to try a natural alternative before a dangerous surgery, please contact an upper cervical chiropractor in your area. A consultation may be your first step down the path to recovering your quality of life.