Four Phases of Migraines and One Source of Natural Relief

Four Phases of Migraines and One Source of Natural Relief 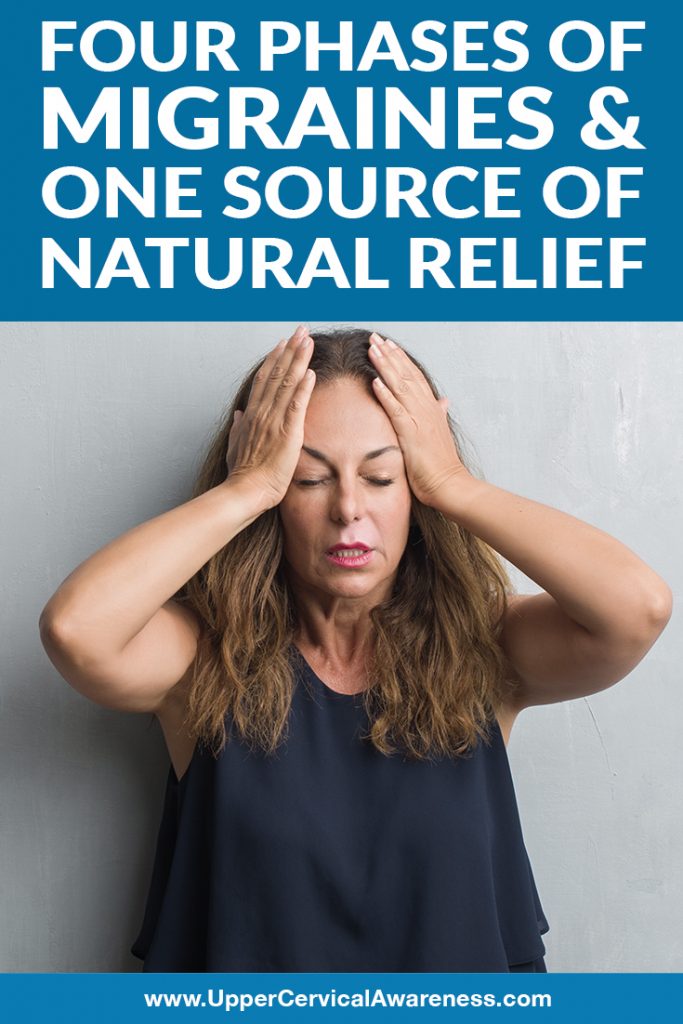 Migraines are the number one neurological disorder in the world, affecting more than 37 million people in the United States alone.  In addition, there are nearly 5 million people who have at least one monthly migraine episode. Another 4 million suffer chronically, experiencing at least 15 days of migraines each month. Women are much more likely to suffer from them. Of the 28 million female sufferers, 85% are chronic sufferers of this condition

Certainly, migraines are bad headaches but are more complex.  In fact, in some cases the person may not even have the typical headache pain associated with a migraine episode. They consist of a combination of neurologically-based symptoms that can include up to four different phases, with a unique set of symptoms possible for each phase.  Each phase may not occur during an episode, as each episode can vary from the last.

While migraine episodes are not exactly predictable, there are four distinct stages or phases that a migraineur could experience.  Knowing about these different stages of episodes can be helpful for migraineurs to properly diagnose or possibly prevent an attack from getting worse.

Firstly, the prodrome phase. It can serve as a warning that a migraine attack is coming, as it can begin hours or even days prior to the other phases. Approximately 30 to 40 percent of migraineurs experience the prodrome phase. Possible prodrome symptoms are as follows:

Secondly, the aura phase that affects only about a quarter of migraine sufferers. However, it is possibly the most popular phase of migraines. The most well-known and easy-to-identify symptom of the aura phase is the visual changes that could happen. There are a number of other possible symptoms that can come with a migraine aura:

Lastly, the final phase of a migraine attack. The postdrome phase is where a person begins the recovery process.  This phase has earned the title of “migraine hang-over” since the migraine attack can leave a person feeling exhausted and worn out for a few days following an episode.  Postdrome symptoms can be similar to the first phase, and could include:

An Effective, Natural Solution for Migraines

It has been clearly confirmed from studies that there is a strong link between migraines and your neck. It is a fact that neck pain is a prevalent symptom among migraineurs.  Migraines commonly follow head or neck injuries (even minor ones), though it can sometimes take months or even years before symptoms appear. As a result, it is difficult to identify a connection between the two.

Head or neck injuries, as well as daily wear and tear that slowly causes damage to the neck over time, can cause the uppermost vertebra in the neck to misalign. A misalignment here in the atlas vertebra could cause a number of issues leading to a higher likelihood of migraine onset.

Here are few reasons why this is true:

Each of these can be a contributing factor in the development of migraines that could potentially become a chronic condition.  If you are currently suffering from migraines, whether infrequent or chronic, getting your atlas alignment examined by an upper cervical doctor is an important part of finding a lasting solution, particularly if you have any history of head or neck injury.

The goal of an upper cervical doctor is to restore proper atlas alignment, thereby correcting the underlying cause of migraines and similar headache-related conditions. Once an atlas misalignment is confirmed as a factor in your situation, we will apply a gentle and precise upper cervical chiropractic adjustment, specifically tailored to your problem.  This helps to begin the body’s natural healing process, resulting in both short- and long-term benefits and improvements to the quality of your daily life.