Fibromyalgia Vs. Myalgia: What Is the Difference?

Fibromyalgia Vs. Myalgia: What Is the Difference? 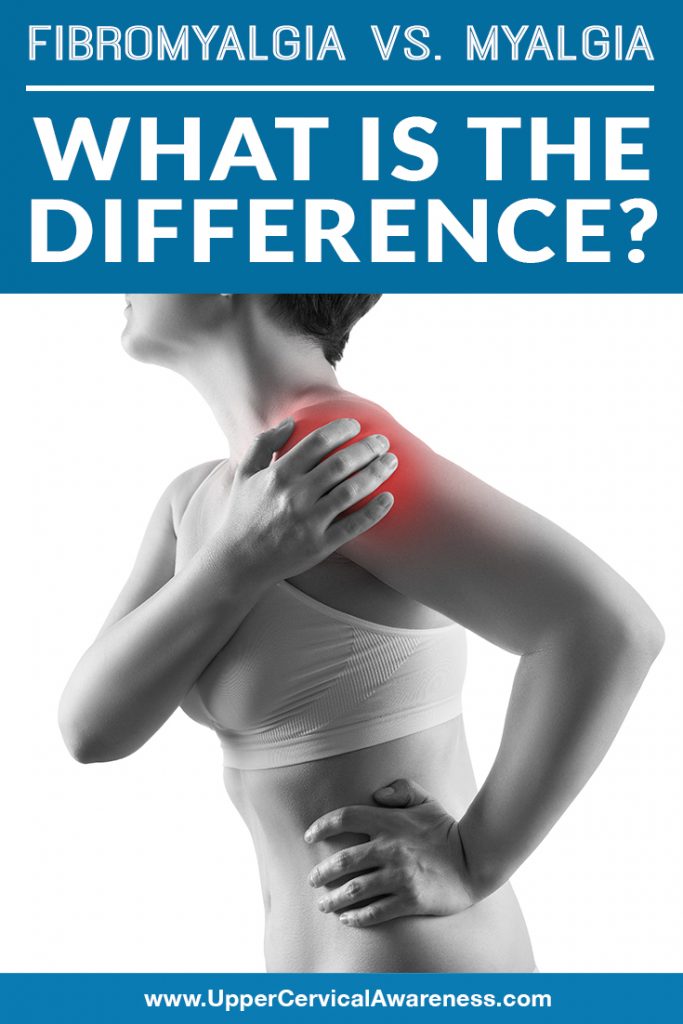 If you have heard of both fibromyalgia and myalgia, you may wonder what the two terms mean. We are going to look at both the differences between these two words as well as the symptoms of fibromyalgia. Then, we will conclude by considering a natural way to get help for fibromyalgia. Let us begin by defining both terms.

The number one difference is that myalgia is not a condition. It is a symptom. Myalgia fundamentally just means muscle pain. It doesn’t really matter what is causing the pain because this is a general term. From the tiniest muscle ache to chronic pain, all muscle pain is myalgia.

To breakdown this symptom into small categories, myalgia is usually referred to as being either short-term or long-term. Short-term myalgia often isn’t severe. Frequently it is caused by overexertion. You may be experiencing a muscle cramp or pull. Long-term myalgia is a much bigger deal.

When myalgia occurs long-term, that indicates an underlying condition rather than an acute cause. There could be a problem with the connective tissue of the body that requires medical intervention. It may even relate to the organs of the body.

On the other hand, fibromyalgia is a medical condition. It is a syndrome with a wide array of symptoms. Myalgia is a part of the name because the most prominent symptom of this condition is pain. However, that is where the similarities between myalgia and fibromyalgia end. Let’s take a closer look at the symptoms of this chronic disorder.

What Are the Symptoms of Fibromyalgia?

Here are some of the more common symptoms of fibromyalgia.

Clearly, there is much more to fibromyalgia than just the myalgia. But what is the point of knowing the difference?

Why Does the Distinction Matter?

It may seem like a little matter to pick about words that are similar but mean different things. However, the point of this article isn’t to be pedantic. The fact is that myalgia will often resolve on its own. An over the counter pain medicine can hold a person over while a pulled muscle heals. Even for more severe causes of myalgia, pain medicine may be the best way to manage symptoms while correcting the underlying problem. However, this is not the case with fibromyalgia.

Because of the nature of fibromyalgia pain, pain killers rarely help. And they certainly won’t do anything for the myriad of symptoms that accompany the pain. So if you or a loved one has fibromyalgia, then you need to find the right kind of help. Here is one natural therapy that has benefited some patients in case studies.

Consider the following case study that reveals a possible connection between fibromyalgia and upper cervical subluxation.

A 45-year-old woman went to an upper cervical chiropractor after 11 years of living with fibromyalgia. The onset of fibromyalgia occurred following several car accidents, including two major traumatic injuries. When examined by x-ray, the practitioner discovered that the top bones in her neck were out of proper alignment. This is common following car accidents and other forms of head and neck trauma.

The results were astounding. The patient had previously required a wheelchair much of the time. After just six months of care, she stopped using the wheelchair. After her first reevaluation, she stated that she no longer was experiencing symptoms of fibromyalgia. Other symptoms, such as sciatica, also grew better with subsequent evaluations.

What is upper cervical chiropractic, and why may these precise and focused adjustments help some fibromyalgia patients?

Since the C1 and C2 vertebrae can affect blood flow to the head, cerebrospinal fluid drainage, brainstem function, and other critical functions that impact the CNS, proper alignment of the upper cervical spine is a necessity. Upper cervical specific chiropractors receive training to precisely detect and correct misalignments in these two bones. To learn more, contact an upper cervical chiropractor in your area. It may be your first step on the path to better health and well-being.