Fibromyalgia 101: The 10 Things You Need to Know

Fibromyalgia 101: The 10 Things You Need to Know 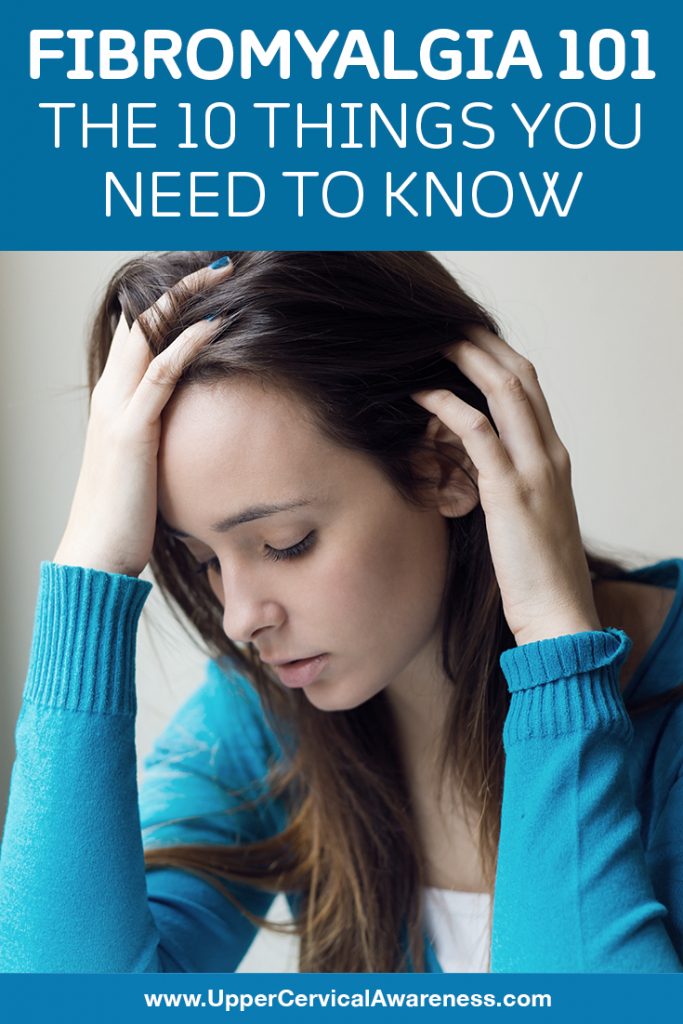 Fibromyalgia is a chronic pain syndrome that causes widespread musculoskeletal pain. However, it is not a musculoskeletal condition. As a result of there being no evidence of inflammation in the joints to cause the pain of fibromyalgia it is sometimes classified as a neurological condition, but don’t let that confuse you. The pain is not all in your head. In fact, the biggest issue may be in your neck.

We will discuss that further in our list of the 10 things you need to know about fibromyalgia.

No doubt you notice how many of these points are along the spine and are either in the neck or very near it.

Some doctors still don’t consider it a real disease, or they don’t know enough about it to make an accurate diagnosis. Patients are often shifted from doctor to doctor and may receive a diagnosis of a number of other conditions first. Many practitioners will try to rule out other conditions with similar symptoms first. This can be frustrating and tiring for patients.

#3. You Probably Have Sleep and Fatigue Issues as Well

One of the conditions that doctors confuse with fibromyalgia is chronic fatigue syndrome since fibromyalgia often presents with fatigue as well. This may be because chronic pain can make it difficult to sleep. Other symptoms, such as fibro fog, may be worsened (or maybe even caused) by the lack of sleep.

#4. There Are Many Other Conditions Associated with Fibromyalgia

Basically, if you have fibromyalgia, you run a higher risk of a number of other conditions as well. These include things like irritable bowel syndrome, migraines, depression, anxiety disorder, and TMJ dysfunction.

#5. Fibromyalgia Isn’t the Same for Everyone

This is another factor that makes getting a diagnosis difficult. What if your pain levels just aren’t that bad on the day the doctor examines you and checks your tender points? Not everyone experiences the same amount of pain with the same frequency. Other symptoms that accompany the pain may also vary from patient to patient with about two dozen possible symptoms in all.

#6. There Is No Definitive Diagnostic Test (According to Most Doctors)

There is no x-ray or blood test that can be run at a hospital to determine if you have fibromyalgia – or at least that is what you will be told. That having been said, there is a blood test that was reported on in Fibromyalgia News Today that is supposed to be 94% accurate. It just hasn’t caught on yet apparently, so you may have to bring it to the attention of your physician if you want the test performed.

#7. Medication Is Often Prescribed for Symptoms

The jury is still out on what causes fibromyalgia, so there’s no medicine that can cure it. However, doctors usually still prescribe things to fight symptoms. You may be given a pain reliever, but keep in mind that the pain of fibromyalgia is not a problem in the muscles, so pain medicine may not be effective. Sleeping pills are often prescribed. You may also need something to combat any depression or anxiety that crops up as an associated condition.

#8. More Women Have Fibromyalgia Than Men

Why? It is probably because women are willing to go to the doctor and through the diagnostic process. Since there is a stigma attached to getting a fibromyalgia diagnosis, some men may be too ‘macho’ to want to get a proper diagnosis.

#9. The Cause Is Unknown, But the Neck May Play a Key Role

Researchers haven’t found an underlying cause for fibromyalgia but think about what they do know. The pain comes from the central nervous system and how the body is processing the pain. Many tender points are near the spine and particularly the neck. Cervical problems can affect blood flow to the brain, brainstem function, and lead to migraines, sleep problems, difficulty dealing with stress, and many other health problems.

#10. Upper Cervical Chiropractic Has Been Successful in Case Studies

Some patients have seen fibromyalgia go into complete remission after getting a tiny misalignment in the top bone of the neck corrected. This further emphasizes the connection between the neck and fibromyalgia. What makes upper cervical chiropractic unique?

Upper cervical chiropractic is also a cost-effective form of care because adjustments are long lasting, and you only need one when the atlas (C1) is out of alignment.

To learn more, schedule a consultation with a practitioner near you. If you are suffering from fibromyalgia, especially if you have a history of head or neck trauma, the natural relief you have been searching for may be within reach.