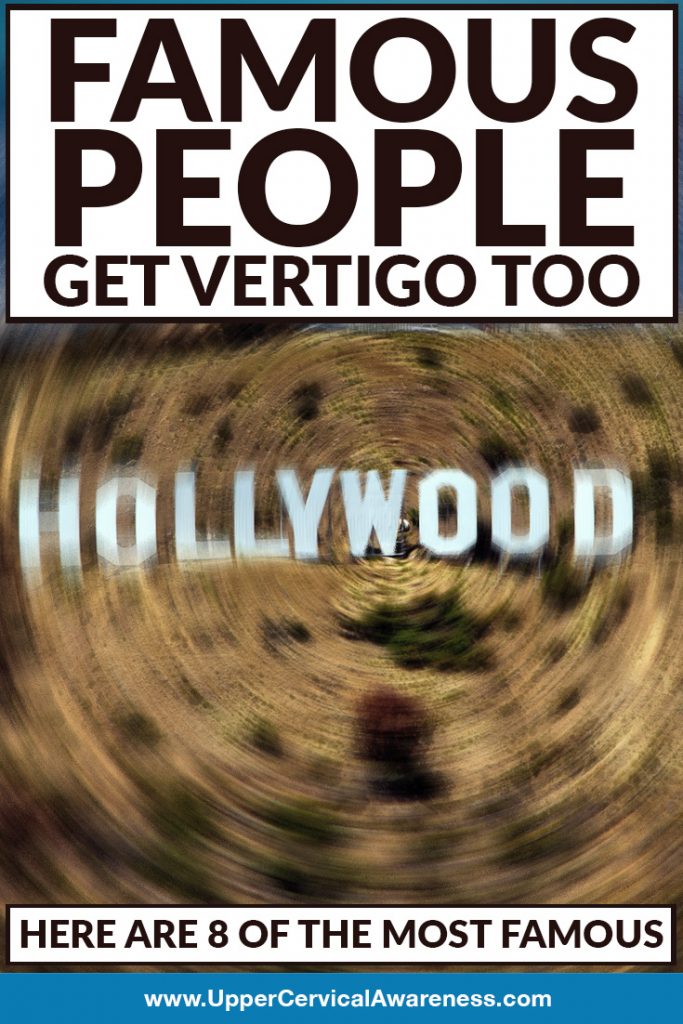 Vertigo is so common that even the wealthy and famous cannot avoid dealing with this debilitating ailment. We’re about to take a look at 8 of the most famous individuals who have openly admitted suffering from vertigo. Hopefully, this will help you to appreciate not only how common the condition is but also how it can relate to a person’s performance at work.

After considering some famous vertigo patients, we’ll look at a natural way to find relief from this common problem.

Since her “wardrobe malfunction” at the Super Bowl halftime show a number of years back, Janet Jackson has been more infamous than famous. That aside, she also struggles with vertigo despite a successful singing and acting career. Where do Ms. Jackson’s vertigo episodes spring from? In 2008, she canceled a number of shows on her tour due to migraines. Vertigo is a common symptom of migraines affecting 40% of pehttps://www.uppercervicalcare.com/blog/upper-cervical-chiropractic-care-for-vertigo-relief-204ople who deal with this neurological condition.

Even champion sports stars can suffer from chronic health ailments. “King” James, as many of his fans affectionately call him, deals with the most common cause of vertigo – benign paroxysmal positional vertigo. Basically, that means certain head positions cause the onset of the condition. For Mr. James, some vertigo bouts are strong enough to cause falls or what they call “drop attacks.” He often “took dives” on numerous occasions, but LeBron contests that many of those sudden falls are due to his health condition.

If you suffer from vertigo but still wish you could be an astronaut, Alan Shepard is about to become your role model. Mr. Shepherd dealt with a particularly debilitating cause of vertigo called Meniere’s disease. This is a condition that not only causes severe bouts of vertigo but also tinnitus (ringing in the ear), a feeling of fullness in the ear, and even fluctuating hearing loss that can become permeant as the condition progresses.

Ms. Lee was an actress and singer whose music lives on in many modern movies even though she died at the age of 82 back in 2002. Peggy Lee was also a sufferer of Meniere’s disease. Imagine trying to carry a tune with a ringing, buzzing, or whooshing sound in your ear. Between that and the vertigo that comes along with Meniere’s, Ms. Lee had a lot to contend with on her road to fame.

Despite the fact that only about 0.2% of people have Meniere’s disease, it seems to come up over and over again among famous people. Emily Dickinson is arguably still the most famous female American poet down to our day. In fact, Ranker.com lists Ms. Dickenson as number 42 on the list of greatest writers of all time.

Another famous person with Meniere’s disease, Ms. Chenoweth is popular for her recurring role on the TV show Glee and for being one of the casts in the original Broadway Wicked as Glinda. In fact, she has the distinction of being one of the best-known Broadway stars of the 21st century despite dealing with vertigo and tinnitus.

She may have played a deaf girl on the hit show Switched at Birth, but hearing difficulties are not all acting for Katie Leclerc. She learned of her Meniere’s disease while in her 20s, younger than most people see the onset of this condition. Maybe the partial hearing loss that accompanies Meniere’s helped her to play the role. Either way, she has discussed her strict low-salt diet in interviews. This is to reduce the body’s ability to retain water and thereby decrease the amount of fluid in the ear, a contributing factor to the vertigo and other symptoms of Meniere’s.

Not to be confused with popstar Bryan Adams, Ryan Adams is modern-day singer/songwriter legend. However, he had to take 3 years off from the business due to Meniere’s disease. Even now, he’s very strict about there being no flash photography at his concerts or during interviews due to the fact that flashing lights can trigger the vertigo and other symptoms he has to deal with.

Coping with Vertigo Naturally and Effectively