Can Vertigo Happen for No Reason?

Home/Vertigo / Dizziness / Menieres/Can Vertigo Happen for No Reason?
Previous Next

Can Vertigo Happen for No Reason? 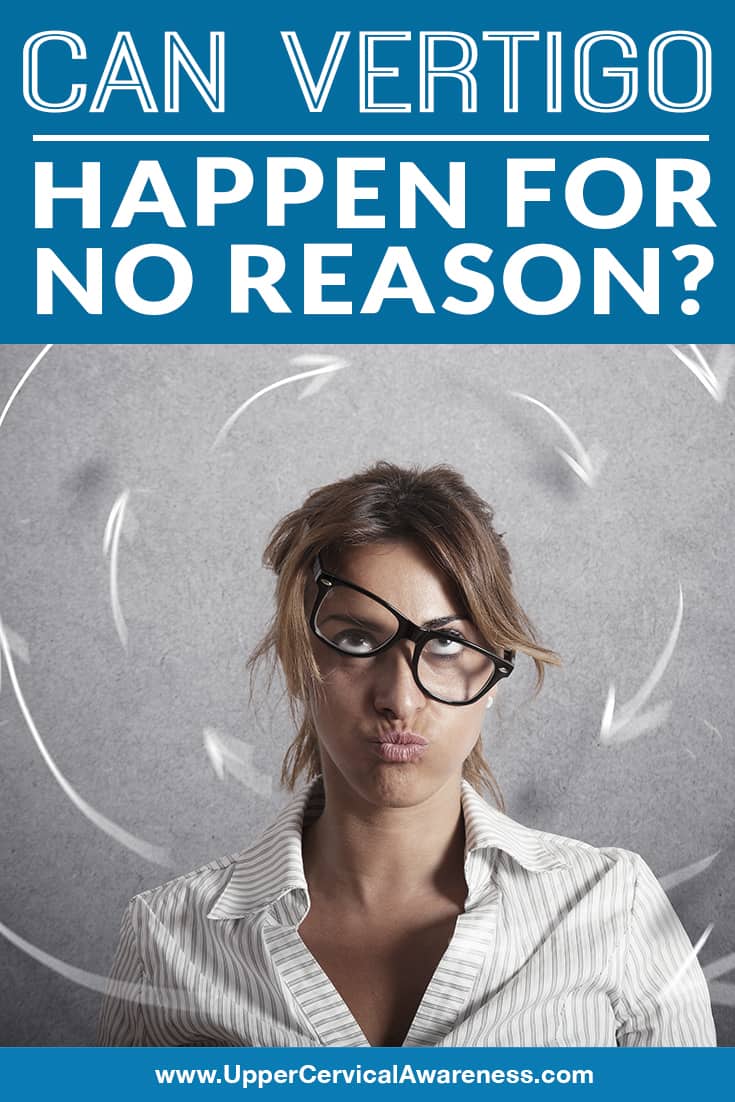 The answer is NO. Vertigo is a symptom of a condition. When vertigo occurs, it is often due to problems in the body’s balance system. It causes individuals to feel as if they are spinning, or the objects around them are rotating. However, in reality, they are utterly not moving at all.

Vertigo is a swaying or spinning feeling. Here are some associated symptoms of vertigo:

Conditions That Can Cause Vertigo

BPPV is a prevalent cause of vertigo. It triggers quick and short bouts of dizziness that ranges from mild to severe. Also, it often happens whenever you move your head in specific positions. These would include:

This condition is not dangerous by itself. However, it comes with higher risks if the vertigo attack occurs while you are doing any of these activities:

The outcome could be severe and dangerous if you lose your balance on these circumstances. Also, other symptoms of BPPV include:

It is inflammation of the vestibular nerve located in the inner ear. This nerve is also responsible for sending messages about the body’s balance from the inner ear to the brain. Thus, if it suffers from inflammation, vertigo becomes the result. This, it only affects one ear at a time.

It is a disorder of the inner ear. It affects the person by giving him or her sensation of spinning (vertigo). There are other qualities included, such as:

Meniere’s disease often begins to develop in people aged 20 to 50 years old. Sometimes, it can happen earlier in some individuals.

It is due to the swelling of the inner ear’s labyrinth. It often results in vertigo and hearing loss. Frequently, it is due to a virus, or occasionally bacteria. Some triggers of this condition include:

When an individual experiences labyrinthitis, it is because parts of the inner ear become irritated or swollen. As a result, it causes the person to lose balance and experience hearing loss. Other symptoms include the following:

The Basics Of Vertigo

To understand vertigo, we will have to get information about how the inner ear functions. Vertigo and the inner ears have a close connection, and the vestibular system has a vital role in this. This system is a complex network of sensors that provide the brain with a sense of spatial orientation and equilibrium. As a result, it provides us with the ability to coordinate our balance with movement effectively. This system consists of the inner ear’s labyrinth and the cochlea (a component of the auditory system). The vestibular system has two major parts:

The vestibular system functions to send signals to neural structures that manage eye movements and the muscles that help us move and stand up. Also, it helps us to have a clear vision and maintain stability while standing upright. Therefore, the brain interprets these signals and messages so the body can be aware of its position or movements.

Each canal is positioned with a parallel counterpart on its right side. Also, each one functions together in a push and pull approach. So that when one gets stimulated, its corresponding partner is subdued, and so on. It is the reason why you can sense many directions of rotation. The right horizontal canal becomes stimulated by head rotations to the right side, while the left horizontal channel gets stirred by head rotations to the left.

You will have an idea of how some conditions can affect this system when it malfunctions. As a result, of course, vertigo symptoms develop.

Vertigo And The Upper Cervical Spine

Clinical research confirmed that a misalignment in the bones of the upper cervical spine could be one hidden reason for vertigo in many cases. First, the study conducted on 60 patients with different types of chronic vertigo. Fifty-six of these vertigo patients reported experiencing head or neck trauma or injury in their past. These included:

Second, after getting examined by an upper cervical chiropractor, all 60 patients showed signs of misalignment in their upper cervical spine. Later, each patient received an adjustment finely tailored to each of their specific needs. Finally, in a span of one to six months of upper cervical care, every participant experienced significant positive results. About 48 of these participants experienced complete elimination of their vertigo symptoms.

Upper cervical chiropractic has proven itself successful in caring for various patients. It has given long-term healing to patients suffering from vertigo and other health problems.

Upper cervical chiropractors use a precise, safe, and gentle procedure that encourages the misaligned bones to move back to its proper position without pain. They tailor the adjustments to each patient’s specific needs. As a result, it produces long-lasting changes since the bones return to their position gently and precisely.

Would you like to experience an end to pain and discomfort safely and naturally?