Can Migraines Actually Be Due to Inflammation?

Home/Migraines / Headaches/Can Migraines Actually Be Due to Inflammation?
Previous Next

Can Migraines Actually Be Due to Inflammation? 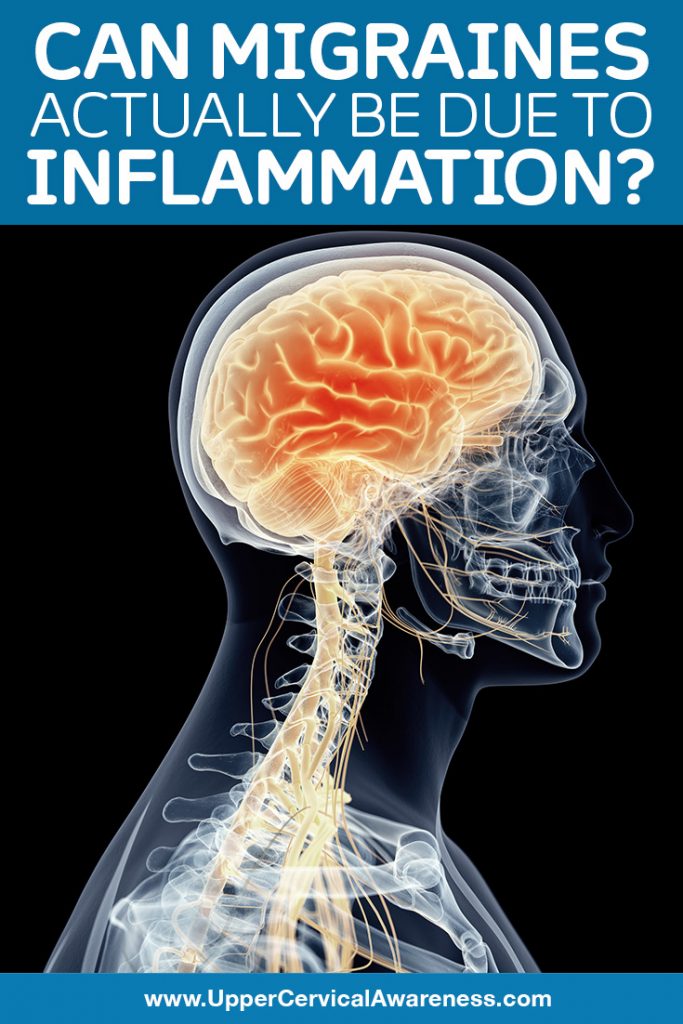 Migraines are an extremely debilitating disease. They may involve pounding and throbbing head pain, nausea and vomiting, and sensitivity to light, sound, and certain odors. Migraines are very common, affecting 39 million people in the United States and nearly 1 billion people earth wide. However, they remain very much misunderstood.

There are many ways to care for migraines from antidepressants to beta blockers to highly potent painkillers. If you or someone you love suffers from migraines, you may have tried one or all of these. And, it is possible they did not work or maybe helped for a short while and became ineffective over time.  This is because it is extremely difficult for doctors  to care for a condition they know very little about.

Various theories have been proposed about the cause of migraines. Some feel it is the constricting of the blood vessels that causes the head pain. Others feel it is due to an underlying central nervous system disorder, irregularities in the brain’s vascular system, or genetics.

Recent research sheds light on the theory that inflammation may play a role in the onset of migraines. A study was published in Nature Genetics that suggests the answer to what causes migraines may be in a place we have not been looking into previously. A University of Chicago team found that the widely accepted ICD (International Classification of Diseases) and similar methods of putting diseases in certain classifications are missing important connections. This has a huge impact on how illnesses, such as migraines, are cared for.

For example, the way migraines are classified now has more to do with them being a disease of the central nervous system. However, the author of the above-mentioned study, Andrey Rzhetsky, found migraines to be more correlated to such diseases as irritable bowel syndrome (IBS), cystitis (bladder inflammation), and urethritis (urethra inflammation). This seems to point to migraines as being more closely related to, not a nervous system condition, but an inflammatory process. This brings us to the thought that by using some of the procedures in place to care for inflammatory disease, migraines may also be helped.

Another interesting point is that research has revealed that IBS, cystitis, and urethritis have to do with immune dysfunction. Therefore, migraines also may have a close association with immune system function. This means the way migraines are cared for may be all wrong. In a way, this gives hope to those suffering from migraines – perhaps a new approach can be found.

Genetics, the Environment, and Migraines

When the study refers to the genetic and environmental links, it is not talking about the makeup of the conditions but rather the results showing migraines and IBS both happen in people who share genetic similarities. In addition, migraines and cystitis plague people in similar environments. In other words, looking at these conditions based on just their symptoms may cause researchers and doctors to miss the fact that people living in the same household or those who are related are also suffering from these conditions. This may provide further evidence as to how to best to care for them.

The researchers examined nearly 130,000 families living in the United States making up close to half a million individuals. They looked at the data twice. The first time was to compare genetically similar people (parents and children or siblings). Second, they looked at people who lived together to examine the shared environment link (such as spouses since they did not have the genetic link). The results? Quite surprisingly, the strongest connection was the link between migraines and IBS genetically, as well as migraines and cystitis and urethritis environmentally. So, what does this mean?

Well, we must consider the fact that people can suffer from IBS, urethritis, and migraines and it may have nothing to do with genetics or the environment. However, the information presented in this study can open up new avenues of research to pursue in the hopes of finding something that will help with the pain of migraines. Until the answer to migraine pain become clearer, you may wonder if there is anything that can ease the pain?

Natural Relief for The Neurological Condition

These vertebrae provide protection to the delicate brainstem, the communication highway of the body. However, if they become misaligned, they can actually put the brainstem under stress. As a result, it may send improper signals to the brain. This can lead to migraines, and it can also be the reason for some of the results of the study above. Inflammation can be stem from improper communication between the brain and body.

We use a low impact adjustment that does not require us to pop or crack the neck to get positive results. Rather, the gentle method we employ encourages the bones to move back into their original position more naturally. This leads to longer lasting results and reduces the number of visits required to keep the bones in proper alignment. Many people report seeing an improvement in or elimination of their migraines, often in only a few visits.