Breaking Down the Relation of Migraines to Inflammation

Breaking Down the Relation of Migraines to Inflammation 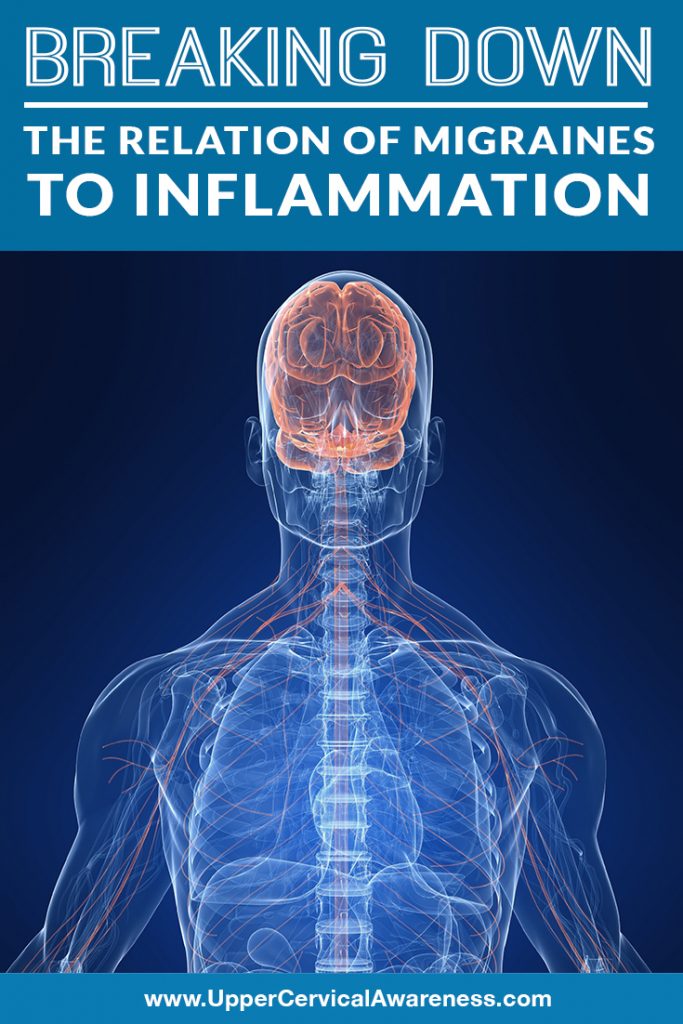 Migraines are a neurological condition. Headaches are one of its leading symptoms, although it is much more than an ordinary headache. They can even happen without the existence of a headache. The hallmark signs and symptoms of migraines are the following:

About two days before the display of the hallmark symptoms, other signs of migraines may come about:

Symptoms of migraines can be different for every person, and each episode is not the same as previous episodes. Some symptoms may stay once a migraine has finished. You may still suffer from a dull headache, irritability, and extreme joy or exhaustion.

Who Is at Risk for Migraines? How Long Do Attacks Last?

About 1 billion people are migraineurs in the world. In the United States, 39 million people including men, women, and children have the neurological condition. While anyone at any age can develop migraines, women are three times more likely to get them than men are. Migraines commonly afflict those between 15 and 55 years of age. People with a family history are also more prone to having them.

Most migraines last for around four hours. If migraines are chronic and do not respond well to care, they can persist for up to 72 hours or even an entire week.

How Inflammation Is Connected to Migraines

Inflammation is part of the body’s natural defense mechanism to defend itself from disease, infection, and injury. It operates to endure, destroy, or dilute whatever is being considered a threat. Inflammation results in redness, swelling, and heat. Thus, pain and inflammation are often associated together, but this hardly ever includes migraines as they are not connected with the other existing symptoms of inflammation. It has been thought that the pain of migraines originated from abnormal dilatation of the blood vessels in the brain. However, this has not been confirmed as the direct cause of migraines.

As years pass, more and more studies concentrate on the fact that inflammation may certainly play a crucial part in the onset of migraine headaches. Taking anti-inflammatory medication or adding anti-inflammatory foods in your diet has been seen to reduce the migraine attacks you experience.

Another drug being tested should work to inhibit the release of a protein called calcitonin gene-related peptide (CGRP). Migraine patients have higher levels of this protein than ordinary people do.

Medical researchers aim to build a drug without the side effects that come along with anti-seizure or blood-pressure-lowering medicines. These medications are often inaccessible to those with heart disease. However, it can take a long time for anything to be produced and permitted.

Migraines Linked to Hormones and Lifestyle

Environmental factors and lifestyle can also trigger migraines, including the following:

Migraine triggers are different for each person. When your brain picks up on your specific trigger, it starts setting you up for a migraine. You may experience the onset of your migraine within two hours or as long as two days after the trigger. Blood vessels in your temple start to swell, causing nerve fibers to release a chemical that results in inflammation and pain.

As this occurs, the blood vessels expand even more, worsening the pain. This domino effect keeps going for a few hours until it reaches a point called central sensitization. This results in the pain nerve cells being stuck in a heightened alert mode, and even the slightest movement can bring pain, including the pulse of blood in your brain. This can also impact your digestive system. You may experience nausea, vomiting, and diarrhea. Your hands and feet may get cold, and you may lose color in your face.

Natural Care for Inflammation and Migraines

Inflammation can get out of hand and may result in migraines when false signals are being relayed to the brain. This can emerge if there is a misalignment of the bones in the upper cervical spine, particularly the C1 or C2 vertebra. This kind of misalignment puts undue pressure on the brainstem and causes it to malfunction when sending signals. Upper cervical chiropractors use a gentle technique based on scientific measurements and imaging to create a specific adjustment for every patient.

To see your migraines go away and get positive results with upper cervical chiropractic care, schedule a consultation with an upper cervical specialist near you.