Allodynia and Other Uncommon Fibromyalgia Symptoms

Allodynia and Other Uncommon Fibromyalgia Symptoms 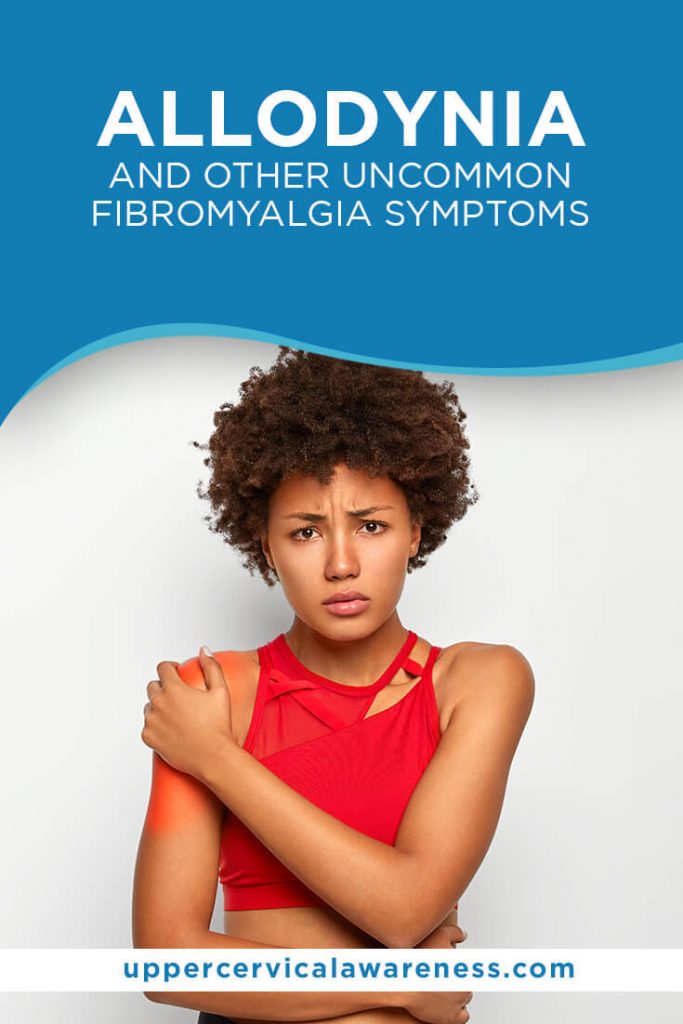 Patients seeking a fibromyalgia chiropractic doctor are accustomed to the debilitating body pain that the condition causes. However, some aren’t familiar with other symptoms, such as allodynia and hyperesthesia. Recognizing this problem, we decided to tackle these relatively uncommon fibromyalgia symptoms and how you can cope better with the help of proven remedies such as upper cervical care. Read on to become more acquainted with fibromyalgia and your options for relief.

Established fibromyalgia chiropractic physicians often hear upsetting stories about body pain, chronic fatigue, and brain fog. These are relatively common problems that develop because of fibromyalgia. Notably, besides these indications, some patients experience uncommon issues such as hyperesthesia, allodynia, lipomas, and dystonia. Learn more about these symptoms below:

Hyperesthesia or rolling skin disease is a common indication of neuropathic health problems. Essentially, patients who have this symptom notice heightened sensory sensitivity. It affects patients differently because some only notice changes in their sense of touch while others note visual, auditory, olfactory, and gustatory disturbances. Unfortunately, other patients experience multiple sensory problems combined with increased body inflammation and seizures.

Allodynia is a distinct type of fibromyalgia pain that increases a patient’s sensitivity to pressure or tactile stimuli. Some patients who experience this symptom liken the sensation to an intense sunburn. Fibromyalgia chiropractic patients who have allodynia experience extreme discomfort when they take a shower, change their shirt or touch their skin.

Studies have yet to understand why and how allodynia develops in people with fibromyalgia. So far, researchers and doctors have identified three sub-types of allodynia, including:

How often do you hear patients talk about having dystonia? Chances are, you’ve never come across this health complaint before. That’s because dystonia has only about 250,000 recorded cases in the USA. Dystonia is a movement disorder that often results from a neurological problem. It causes slow, repetitive movements (muscle twitching or jerking) and affects body posture.

The affected body parts tend to vary from one patient to another. Dystonia can also impact speech, trigger abnormal neck contraction, and uncontrollable blinking in some cases.

Lipomas are benign fatty tissues that develop under the skin. While lipomas generally don’t cause problems, patients with fibromyalgia experience extreme discomfort when they have these abnormal tissue growth in their bodies. Lipomas can put immense pressure on the nerves and other tissues. This aggravates body pain and pressure sensitivity. 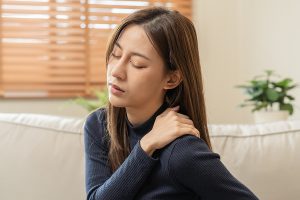 Excessive sweating is probably one of the most bizarre symptoms of fibromyalgia. According to studies, several factors can trigger this symptom, including:

Paresthesia (pins and needles) isn’t a common indication of fibromyalgia. This might be because patients mostly pay attention to the pain or tenderness caused by the condition. Researchers explain that pins and needles usually indicate neuropathic problems. That means the sensation can stem from a pinched or compressed nerve in the affected body part or a central nervous system imbalance due to cervical subluxation.

Studies explain that fibromyalgia doesn’t directly cause easy bruising. But, the condition tends to increase the risks of this health concern because of its close link to mast cells production. Mast cells release histamines which trigger the body’s inflammatory response. These cells also happen to contain heparin. As you might recall from your anatomy and physiology lessons in high school, heparin is a substance closely associated with bruising.

Indeed, fibromyalgia can take over your life and impact your well-being. It can also cause uncommon symptoms that may further isolate you from your surroundings in fear of not getting the emotional and psychological support you need. Thankfully, you can potentially resolve your symptom with the help of upper cervical chiropractic – a proven natural and holistic remedy for fibromyalgia.

With a comprehensive diagnosis from a fibromyalgia chiropractic doctor, you can pinpoint the origins of chemical and mechanical imbalances in the cervical spine. As case studies have proven, fibromyalgia and other neuropathic conditions can sometimes stem from postural problems in the upper neck. Small changes in the C1 and C2 bones or the two vertebrae below the head can trigger a chain of events that increases the risks for fibromyalgia. Some examples of these include the following:

By understanding changes in your upper cervical bones, your fibromyalgia chiropractic doctor can determine the exact measurements needed to ease your bones back in their proper places. If you previously got into an accident that caused your brain to overextend or move back and forth, you likely have a cervical subluxation. Additionally, it would help if you also looked into this remedy if you have poor posture, unlevelled shoulders or legs, and repetitive neck or head injuries.

Get help in managing your uncommon fibromyalgia symptoms today by seeking the nearest upper cervical chiropractic doctor in your city!