8 Vestibular Disorders that Cause Vertigo – 1 Shining Ray of Hope

8 Vestibular Disorders that Cause Vertigo – 1 Shining Ray of Hope 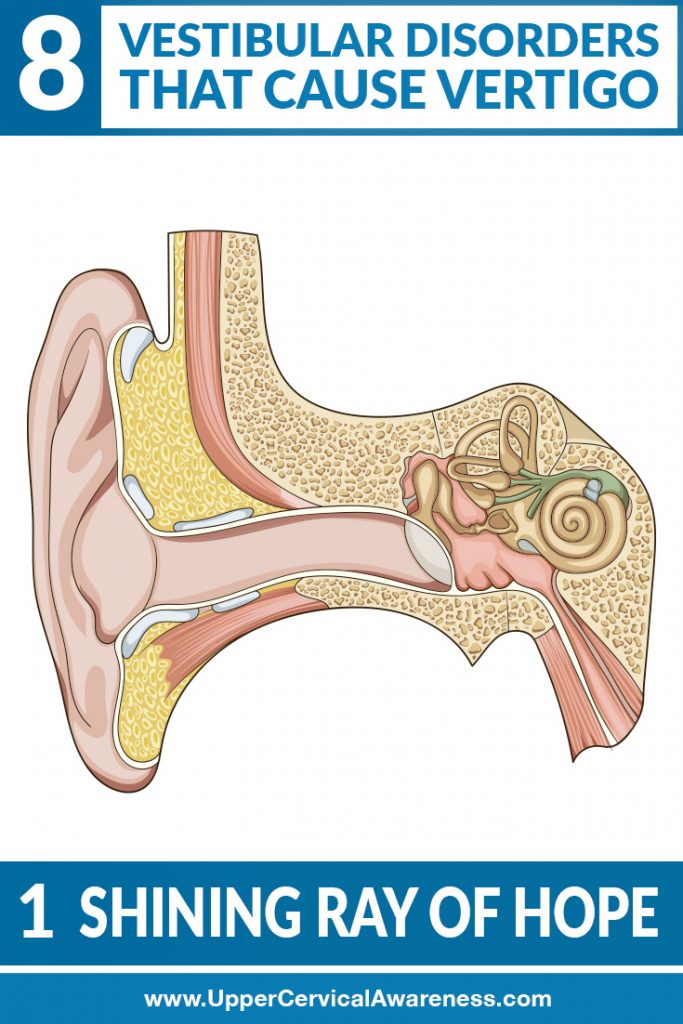 While vertigo can be caused by a problem in the central nervous system, the cause is more often in the vestibular system – the part of the inner ear that aids in balance and spatial orientation. As a result, there are numerous vestibular disorders that can cause vertigo. Today we will look at 8 such conditions. Then we will discuss a natural, drug-free way that many are finding relief.

Autoimmune conditions involve the body attacking itself. When the immune system malfunctions, it can mistake normal systems of the body, such as the inner ear, as intruders. When this occurs in the ear, it can lead to vertigo and other vestibular symptoms.

Also called positional vertigo or BPPV. In the curved canals of the inner ear, there are small calcium carbonate crystals that help to detect movement and orientation of the body. If one of these escapes the canal where it should belong, vertigo can result. While this is the primary cause of BPPV, patients who present with vertigo who do not have another identifiable underlying cause usually receive positional vertigo diagnosis. Ultimately, it just means vertigo may occur due to changes in head position. This is the most common cause of vertigo, in part because it is used as a catch-all.

This refers to a situation wherein a patient’s vestibular function decreases in both ears. It gets its own category because many vestibular conditions primarily affect just one ear. Vestibular problems in both ears can lead to vertigo, balance issues (especially in the dark when the body doesn’t have the vision to compensate), and vision problems during movement of the head.

CANVAS is an acronym that stands for cerebellar ataxia (CA), peripheral nerve damage (N), and vestibular areflexia (VA). Any of these 3 conditions can cause vertigo and other vestibular problems. The coexistence of all 3 issues is fairly rare but leads to serious balance issues.

It is unfortunate that many doctors write off neck pain that accompanies vertigo as being a coincidence. Otherwise, this might be considered the common condition that it likely is. Neck pain is a common complaint of vertigo patients, and cervicogenic dizziness pertains to vertigo and other vestibular problems that stem from issues in the neck such as an upper cervical misalignment. Since such a misalignment can be at the root of many vertigo conditions (like BPPV and Meniere’s disease), it would make more sense to categorize some conditions as also being cervicogenic instead of making this a completely separate category.

Doesn’t a concussion affect the brain rather than the ear? The fact is that vertigo is a common symptom following a head injury. It may be central nervous system related. However, the ear may also have been affected by the injury. For example, when sustaining the concussion, a person may also have experienced whiplash. This can lead to neck injuries that affect ear function since the top bone of the spine (the atlas) is in close proximity to the ears. Thus, vertigo is common following trauma.

The literal translation is “disembarkment sickness.” It is a phenomenon in which a person continues to feel the movement of a boat, car, plane, train, amusement park ride, and so forth, following disembarkment. Since any false sensation of motion is considered vertigo, this is primarily a vertigo condition.

According to some studies, up to 25% of migraineurs may experience vertigo as a symptom. Vestibular migraine is the term used for migraines that present with vestibular symptoms such as vertigo. Interestingly, these migraines can occur with or without a headache since a headache is just one symptom of the neurological condition and doesn’t need to occur in order for the symptoms to be classified as a migraine.

This is a rare vestibular condition (0.2% of people) although it is becoming more common with upwards of 45,000 people being diagnosed annually in the US alone according to researchers. Symptoms include severe vertigo attacks that can last up to 24 hours, severe tinnitus (ringing in the ear), a feeling of fullness in the affected ear, and hearing loss.

Many of the conditions noted above are related to the neck. Why can we say so with confidence? Consider a study of 60 vertigo patients. Each had vertigo, and 56 could remember a head or neck trauma that preceded the onset of symptoms. After upper cervical chiropractic care, 48 had no more vertigo at all, and the other 12 patients all saw a significant reduction in severity and frequency of attacks.

Vertigo is an extremely common condition, especially as a person ages. This may be due to the length of time that it takes upper cervical subluxations to lead to symptoms, sometimes as long as 15 years from the time of the injury. So if you suffer from vertigo, there is hope, especially if you have a head or neck injury in your history that may have caused a neck misalignment.

To learn more, contact an upper cervical chiropractic near you. You may be a gentle adjustment away from getting some of the natural relief that you have been searching for.