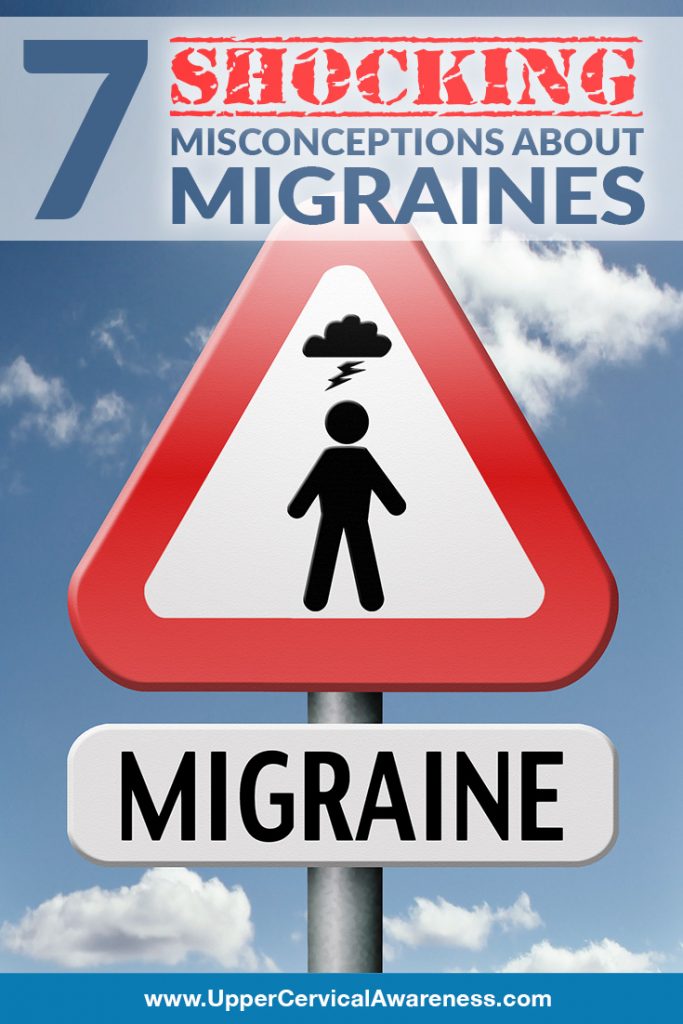 Migraines are one of the most common health conditions with about 12% of people dealing with them. But that doesn’t mean migraines are well understood by any means. In fact, there seems to be a lot of misinformation about migraines available. We’ve compiled this list of 7 of the most shocking migraine myths. But if you suffer from migraines, we want to provide you with a light at the end of the tunnel, so at the conclusion of our article, we will discuss a natural way to get help.

I think everyone who suffers from migraines has heard this before, but if you are not a migraine sufferer, you may be surprised to learn that this is actually a neurological condition. A headache is just one symptom (and you don’t even have to have a headache with every migraine). Other migraines symptoms can include:

About 4 million people suffer from chronic migraines. That means the person experiences 15 or more migraine days per month. Some people even have daily migraines or migraines that last for several days at a time.

Myth #3 – Migraines Are Not Life-Threatening

Okay, so the average migraine won’t kill a person on its own, but migraines have been linked to a higher risk of suicide, a greater chance of cardiac disease, and an increased risk of stroke. Migraines also can cause permanent changes to the brain over time that lead to increased pain levels.

The number of women with migraines outnumber men 3 to 1, but men do get migraines, sometimes even chronic bouts. As a result, the stigma that is already attached to migraines seems to be worse for men, causing many to avoid seeking diagnosis or care. It is also important to note that up to 10% of children experience migraines. Among younger children, it is more common for boys to get migraines. This switches to girls around puberty.

Myth #5 – The Same Things Trigger Migraine for Everyone

If this were true, you wouldn’t need to keep a migraine journal to learn your personal triggers. Unfortunately, it seems like each person’s migraine triggers are unique. Some common triggers include weather changes, bright lights, strong odors, loud sounds, smoke, pollution, lack of sleep, overexertion, missing meals, or fluctuating hormone levels.

If you noticed, we didn’t mention certain foods. That’s because there is little scientific data to back up the idea that foods trigger migraines. If things like MSG, caffeine, nitrates, or tyramines precede migraines for you, by all means avoid them. But we don’t recommend cutting out red wine, chocolate, coffee, and other favorites as the first line of defense.

Myth #6 – All Migraines Are the Same

These are just a few of the many migraine types.

Myth #7 – Once You Get Migraines, You Just Have to Live with Them

When the top bone in the spine (the atlas) becomes misaligned, it can have far-reaching effects on the body. This is because the atlas helps:

Cerebrospinal fluid drainage can also be affected by an upper cervical subluxation. As a result, intracranial pressure may occur. This, along with both of the conditions noted above, can lead to migraines.

Upper cervical chiropractors focus on the atlas to produce good spinal health and to correct the issues mentioned above. Precise measurements are taken to locate even the slightest misalignment. Then a measured and gentle adjustment is used to correct the subluxation. This is a long-lasting adjustment that gives the body the time it needs to heal. As a result, some patients have found that the frequency and severity of migraines are reduced. Others have noted that migraine conditions, even chronic daily migraines, are gone from the very first adjustment.

To learn more about upper cervical chiropractic care or to schedule an examination, contact a practitioner in your area today. You may have just taken your first step on the road to overall better health and quality of life.