7 Facts that Show Migraines Are More than just Bad Headaches

7 Facts that Show Migraines Are More than just Bad Headaches 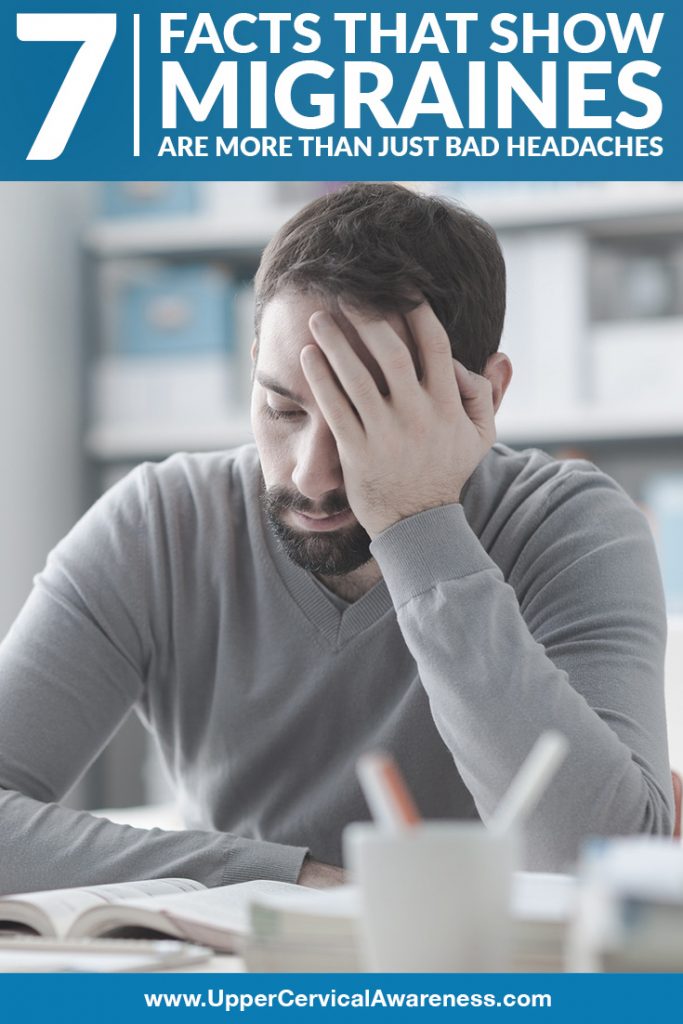 For anyone who has never experienced a migraine, the misconception may exist that it is just a severe headache. Whether the person who believes this is your mate, a friend, or your boss, there are going to be some repercussions if the misunderstanding isn’t cleared up. With that in mind, we’d like to introduce you to 7 facts that show how migraines differ from headaches.

#1 A Migraine Is a Neurological Condition

That probably got your attention. A neurological condition sounds a whole lot worse than a headache. But what does that even mean? A neurological condition is a disease of the nerves, spine, or brain. That’s right – migraines are in the same category of disease as multiple sclerosis, Parkinson’s and brain tumors. Still sound like just a really bad headache?

#2 Pain Is Categorized by Severe Throbbing or Pulsing

Some are under the misconception that a primary difference between headaches and migraines is that migraines only affect one side of the head. However, about a third of migraines are bilateral. That means you can’t go by where the pain is for a diagnosis. The main difference is the type of pain – the pulsing or throbbing that comes in repeating waves.

#3 Not All Migraines Have Headache as a Symptom

The common term used to describe migraines that do not have a headache as a symptom is silent migraines. However, this doesn’t make the pain any less debilitating. For example, if it is a vestibular migraine, a person may be too dizzy to stand. If it is an ocular migraine, the patient may be blind in one eye for a time. Other silent migraines affect the bowels. A stiff or sore neck is also common with silent migraines.

#4 Migraines Come with a Host of Symptoms

The symptoms of a headache are summed up by its name – headache. Migraines symptoms may include head pain but also almost always involve nausea (and possible vomiting), sensory sensitivity, and neck pain. Vertigo occurs in about 40% of sufferers. 25% experience aura about 20-30 minutes before the actual episode starts. And those are just a few of the most common symptoms. Keep in mind that someone suffering from sensory sensitivities may have difficulty dealing with lights, sounds, smells, touches, or a combination of all of these.

#5 One Quarter of Migraineurs Experience Aura

As noted above under symptoms, about 1 in 4 migraineurs have migraine with aura. Aura often involves a series of visual symptoms. Patients who have migraine with aura are at greater risk for associated conditions such as depression. In fact, migraineurs are at a higher risk for suicide than the general population and those who get aura are at an even greater risk according to researchers.

#6 Migraines May Occur in Phases

Of course, that only includes the migraine itself, not the aura or prodrome which can lengthen the process further. In fact, migraineurs can also suffer from a postdrome – symptoms that occur following the conclusion of the episode –  that can last for several days. The common term for these symptoms is a migraine hangover. Symptoms include:

Add this to the fact that about 4 million adults are suffering from chronic migraines. What does that mean? It means the patient has an attack for at least 15 days per month. Some even deal with daily migraines. This level of severity and frequency of attacks leads to a 20% disability rate.

What to Take Away from this List of Migraine Facts

The primary thing to remember is that migraines are not just a bad headache. If your mate suffers from this neurological condition, try to be empathetic and help out with things around the house. Have a friend who suffers from it? Know that he or she may have to cancel on you at the last minute sometimes and that plans made well in advance may be stressful. If it is your employee who is dealing with it, try to create an environment conducive to working even during an attack, but be ready for more sick days than the average worker.

If you are a migraineur yourself, is there anything that can offer some hope on the outlook for this debilitating condition? The answer is yes!

In case studies, both headache and migraine patients benefit from upper cervical chiropractic. Why is this the case? You may have noticed that one of the symptoms that keep coming up both before and during an attack is neck pain or stiffness. In fact, it is one of the most common symptoms after the pulsing head pain. This reveals the connection between migraines and the neck.

Upper cervical chiropractors use diagnostic imaging to pinpoint even the smallest of misalignments in the top two bones of the spine. When very gentle adjustments are used to correct these misalignments, the results are often a reduction in the frequency or severity of symptoms. Some patients have even seen complete resolution of chronic health problems. To learn more, contact an upper cervical practice in your local area.