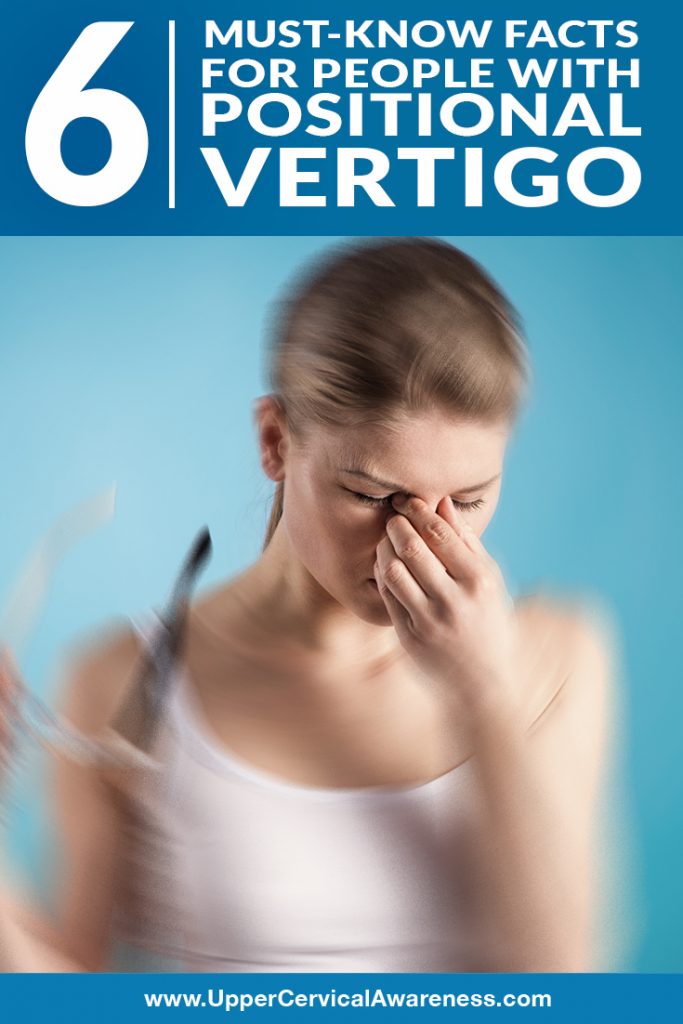 People who need vertigo relief are often just concerned about how to stop the dizziness.  While halting the spinning dizziness is a top priority, there are other facts or information that people with this ailment need to know.

Getting proper health care for this debilitating symptom includes learning the right information about the condition, its causes, and, most significantly, the various relief options available.

In this article, let’s highlight the top six facts about positional vertigo, and hopefully, learning about them will help you manage the symptoms better and get the relief you need.

BPPV is an abbreviation that stands for benign paroxysmal positional vertigo.  It is the technical and medical term used to describe a disorder in the inner ear, making a person suffer from spinning dizziness.

This disorder is further broken down and described in this way:

2. Are there many people who suffer from BPPV?

It is estimated that almost 40 percent of the U.S. adult population would experience vertigo at least once during their lifetime.  It is more common in adults, especially among people above 50 years old. While it is rare among children, there have been recorded cases of BPPV among young patients.

3.  What are the most common BPPV symptoms?

People who suffer from BPPV have the following symptoms:

4. Why does BPPV happen?

Most, if not all, people who seek vertigo relief ask these two fundamental questions: “Why does BPPV occur? How did I get this disorder?”

To better understand this condition, the first information you need to know is that there are calcium carbonate crystals inside your inner ear.  The formation of these crystals is called “otoconia”.

When the calcium carbonate crystals are dislodged and move to the fluid-filled canals, it disrupts endolymph flow. This disruption in endolymph flow causes the brain to inaccurately read signals that affect a person’s balance and stability, which ends with spinning dizziness.

For example, a person who suffers from vertigo might immediately feel dizzy if he or she rolls on a bed. This rolling movement pushes the crystals into the fluid canals, causing a disturbance in the brain signals related to a person’s sense of balance.

5.  What is the Epley Maneuver?

People who have benefited from vertigo relief say that the Epley Maneuver worked well for them. This method involves a set of specific head movements that make the head turn using a full range of motion.  These maneuvers help move and guide any loose calcium crystals back to their original location in the inner ear. The maneuvers also significantly help reduce the symptoms of BPPV.

6. What other safe, natural method can relieve BPPV symptoms?

Vertigo relief has been made available to numerous people who suffer from BPPV through what is called an upper cervical spine alignment.  Upper cervical chiropractors perform the techniques to restore the alignment of the atlas (C1 vertebra) and the axis (C2 vertebra).

The C1 and C2 bones are essential because they protect the brainstem that connects to the inner ear. However, they are delicate, and any misalignment does not only lead to pain and discomfort but also disturbances in the brain’s way of sending and receiving electrochemical signals.

When the brainstem suffers from inflammation or irritation, it disrupts fluid flow in the inner ear. This results in the sending of distorted signals to and from the brain about the body’s balance and position. These signals enable us to move and stay upright; thus, the disruption ultimately leads to the spinning sensation of vertigo.

Visit an Upper Cervical Chiropractor Near You

It’s important to note that the upper cervical spine is located near the inner ears. Any deviation or disturbance in the atlas and axis bones also impacts the functions of the inner ear.

An upper cervical chiropractor works to restore the critical balance and alignment of the C1 and C2 bones.  When their proper alignment is achieved, the inner ear works at its peak. Over time, the body regains optimal health as the brain signals flow unhampered.

If you want to know more about upper cervical chiropractic can help people with positional vertigo, please visit your local chiropractor’s office.