6 Astonishing Facts About Kids and Migraines

6 Astonishing Facts About Kids and Migraines 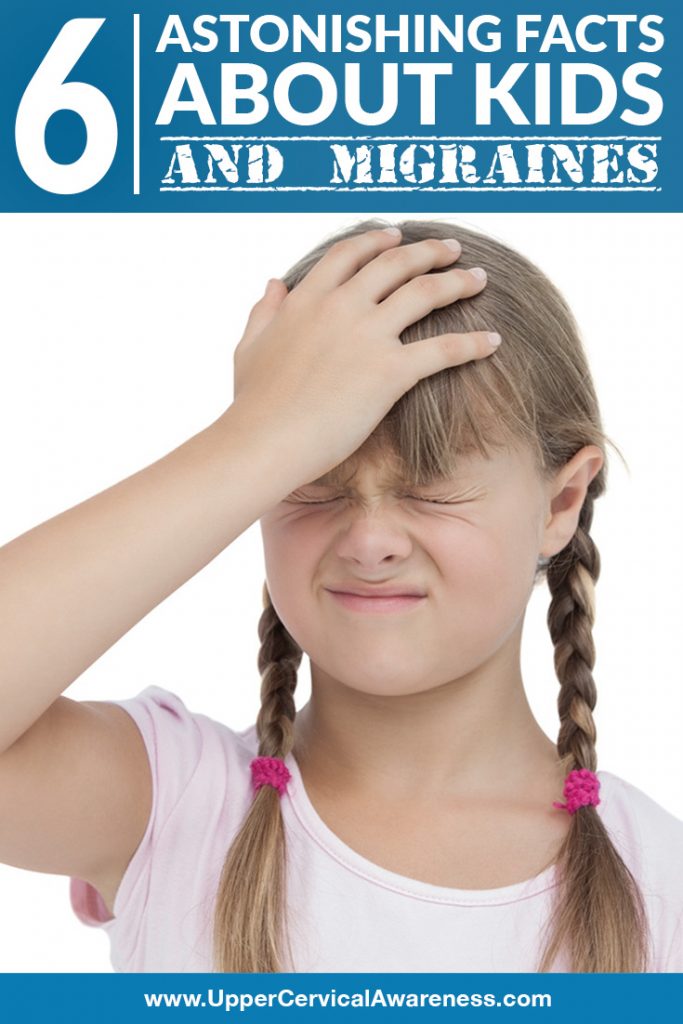 Did you know that children can get migraines too? Since many people don’t realize this, even some parents, migraines can be a difficult condition to diagnose in kids. Just how many school-age children get migraines? How do these affect school performance? Is there anything that can be done to help children cope? We’re going to share six facts about migraines in children and then tell you about one natural way that many people are finding relief from this condition.

#1 It Frequently Go Undiagnosed for Kids

Why is this the case? There are a number of factors. For one thing, we already mentioned that some people think of migraines as an adult condition. Thus, when kids complain of a headache, migraine is rarely expected. The other factor is that kids may not know how to explain symptoms properly. For example, when you were ten did you know the difference between a tension headache and the throbbing that comes along with a migraine? Could you explain nausea or dizziness? This makes it important for doctors to rely on a combination of family history and good communication to understand any accompanying symptoms.

Think about how many kids are your child’s classes at school. If classrooms average 20-30 kids, then that means 2-3 kids in each class probably get migraines. That’s an astonishing number. In fact, it is only just slightly less than the 12% of adult migraineurs. The jump in the number of children who have migraines occurs around puberty. Before that time, the average is more like 5%.

#3 50% of Migraineurs Have Their First Episode as a Child

The majority of adult migraineurs experienced the first episode before age 12. In fact, the earliest age that migraines have been reported at is 1.5 years of age. Some researchers are currently trying to find a suspected link between migraines and colic. This research may end up showing that infant migraines are more common than we may suspect.

#4 It Leads to Increased School Absences

The average student who gets migraines misses twice as many school days as a fellow student who doesn’t have this condition. That makes a huge difference in missed class time, study assignments, and pop quizzes. As a result, a student with the neurological condition has to work much harder to keep his or her grades up. This can be depressing and lead to anxiety. It may also lead to social isolation as kids have a tendency to shun things they don’t understand. Thus, a kid who misses a lot of school for a mysterious reason (since few kids understand migraines unless they get them) may lead to bullying or just a general lack of close associates.

#5 There are More Boy Migraineurs than Girls

Early on in school, it is more likely that a boy will have migraines than a girl. Once children hit puberty this flips, and a disproportionate number of girls have migraines (as is the case in adults as well with women outnumbering men 3 to 1). It appears then that while more girls may be predisposed to migraines than boys, migraines are not triggered until the hormone fluctuations associated with puberty. This makes sense since grown women with migraines tend to have more frequent and severe attacks during menses, pregnancy, and menopause – all times of hormone changes.

#6 Having Parents with Migraines Increases the Risk for Children

While only 10% of kids get migraines, those risks increase to 50% if even just one parent gets migraines. If both parents are migraineurs than children of the couple will have a 75% chance of developing the condition. This is why doctors need to pay attention to patient history when a child complains of headaches. If one or both parents suffer from migraines, additional questions need to be asked to ascertain if any other symptoms exist for the child before writing the headaches off as being tension headaches.

Real Help for Children with Migraines

Upper cervical care starts with diagnostic imaging to take very precise measurements of the top two bones of the spine. Then extremely gentle corrections are provided either by hand or with an adjusting instrument. There is no popping or cracking. In fact, this process is gentle enough for everyone from infants to the very elderly. Consider the following case study:

This is not an isolated case. Many patients who suffer from migraines, especially those who experience neck pain as a symptom, are benefiting from upper cervical chiropractic care. To learn more, get in touch with a practitioner near you.