5 Things the Internet Often Gets Wrong About Meniere’s Disease

5 Things the Internet Often Gets Wrong About Meniere’s Disease 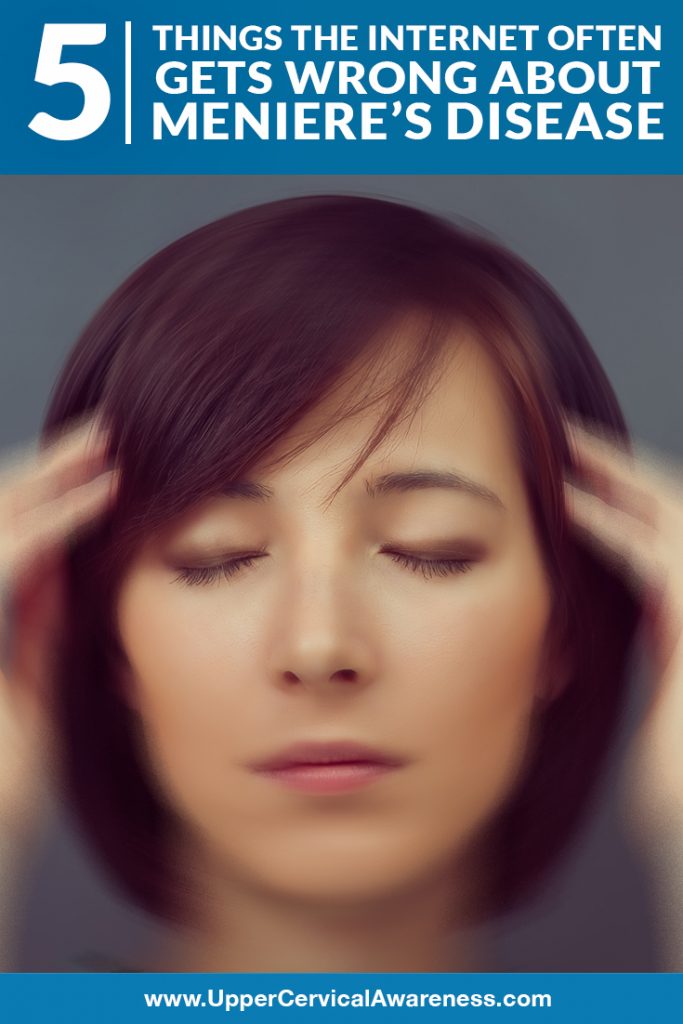 Meniere’s disease is not one of the most common health conditions, but it is undoubtedly recognizable by the symptoms it produces. Starting with severe and debilitating bouts of vertigo, this condition also causes worsening hearing loss and tinnitus (ringing in the ear) as it progresses. There is also a feeling of fullness in the affected ear(s).

While there is a lot of useful information about Meniere’s available online, there are certain things that get repeated from site to site that simply are not correct. Whether it is poor research or lack of experience, it doesn’t change the fact that you need accurate information.

Here are a few things that the Internet often gets wrong about Meniere’s disease, so you don’t get fooled.

#1 Meniere’s Disease and Endolymphatic Hydrops Are the Same Thing

It is easiest to explain why this is incorrect by telling you what endolymphatic hydrops actually is first. Endolymphatic hydrops refers to an excess of fluid in the inner ear. This fluid, called endolymph, plays a vital role in the body’s balance system. However, if there is too much endolymph, it can lead to symptoms like those associated with Meniere’s.

The mistake here occurs because the average age of onset falls between 40 and 60, but that doesn’t mean these are the only ages the condition can occur between. People as young as in their 20s receive a diagnosis of Meniere’s. So don’t assume that Meniere’s is impossible just because you are younger than the average age of diagnosis.

#3 It Is Rare to Have Bilateral Meniere’s

Having Meniere’s disease in both ears is uncommon, but it still happens for about 10-15% of patients. Also, if left untreated, unilateral Meniere’s can become bilateral. The problem with this lack of understanding is that some of the treatment options for severe cases of Meniere’s can be destructive. For example, there are shots you can get in the affected ear, but they can lead to deafness. Surgery is another option that can potentially go wrong. Don’t take a chance on your ear just because someone tells you the other ear will be fine.

This one is just bad math. Someone read a 2013 study that said 615,000 Americans had Meniere’s. They divided wrong and got 2% instead of 0.2% (the correct percentage). To put this in perspective, about 1% of people have Celiac disease (an autoimmune condition that causes damage to the intestines when gluten is consumed). That means about five times as many people have Celiac as Meniere’s, but according to some fuzzy math, Meniere’s would be twice as common. That decimal point is significant in this case. The short version is this – Meniere’s disease is pretty rare.

This is wrong in so many ways that it is tough to decide where to start. First of all, shots or surgery are last resorts. One of the most common things a doctor will recommend if you have Meniere’s disease is a low salt diet. This stops fluid from building up in the ears. It’s not a cure, but it can help to mitigate the symptoms and prevent flare-ups from occurring as frequently.

There are also other lifestyle changes you can make to avoid triggers. For example, smoking or alcohol use can trigger a flare-up. Allergic reactions can also lead to a flare-up, so you need to try to avoid anything you have a sensitivity to. There are certain medications that may set Meniere’s off, so be sure to talk to your doctor if you believe one of your prescriptions is at fault. Never change your dosage without consulting a medical professional first.

Stress is another big trigger, perhaps because stress can lead to excessive inflammation in the body. There are plenty of natural ways to control stress ranging from daily exercise to taking an occasional vacation.

Finally, we want to address one other natural alternative you may want to try for persistent vertigo and other Meniere’s symptoms – upper cervical specific chiropractic.

There are a number of cases studies that have linked the onset of Meniere’s disease with head or neck trauma. For example, in one study involving 300 patients with an upper cervical misalignment, 97% of patients saw an average improvement of 90% in their vertigo. When the practitioner compared patient histories, he noticed that many of the injuries had taken place up to 15 years earlier. Therefore, he posited that a slight upper cervical misalignment can create changes in the surrounding tissue that eventually impacts eustachian tube function.

If you are living with Meniere’s disease, especially if you have a history of head or neck trauma, you may have just found some natural help for your symptoms. You have to try every natural method before you subject yourself to invasive procedures, so if you haven’t tried upper cervical specific chiropractic yet, now is the time. You can find a preferred doctor using the search feature on this website.