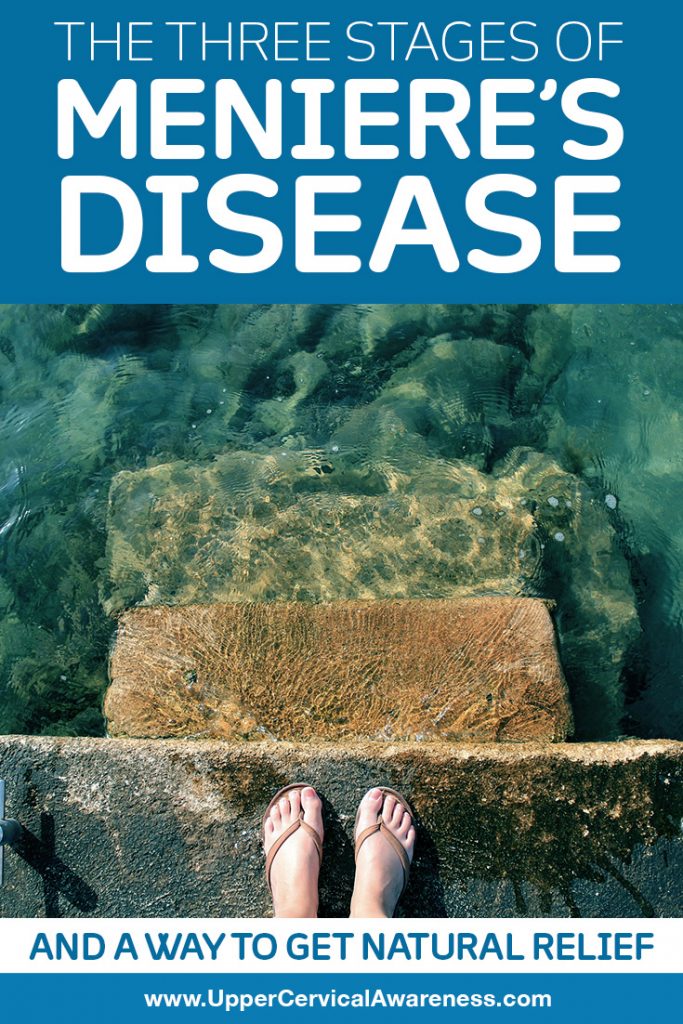 Meniere’s disease is a vestibular condition that is characterized by a number of symptoms including vertigo. Depending on how far along the condition is when a person seeks Meniere’s treatment, symptoms may vary. While Meniere’s patients may not necessarily see all three stages, these can indicate progression of the disease. Let’s take a closer look at the three stages of Meniere’s disease and then we will discuss a way that some patients have been able to attain natural relief.

The first stage or early stage is when the condition causes the most episodes. Flare-ups are unpredictable and may seem to strike at the worst possible moments. This is the stage where diagnosis of most patients happen because the condition makes itself known by means of several symptoms.

First is severe vertigo. The bouts can be so bad that they cause falls or nausea and vomiting. You may even lose some hearing in the affected ear during a bout. When hearing loss occurs, tinnitus often accompanies it. Tinnitus can take the form of ringing in the ear, a buzzing sound, or even a rushing sound.

On top of these other symptoms, the flare-ups can also be very uncomfortable. It may feel as though the ear is full. Attacks usually last a minimum of 20 minutes, and severe episodes can last up to 24 hours, although that is rare. Most of the time, a flare-up will last about 2 to 3 hours.

How often do these attacks occur during the early stage of Meniere’s? Most patients see between 6 and 11 bouts annually. So it is not an everyday occurrence, but you will likely lose a day every one to two months, and there won’t be any warning when it happens.

The good news is that during the middle stage your vertigo may actually get less severe. It’s tough to complain about less nausea and vomiting. The tradeoff is that hearing loss and tinnitus become worse. During the middle stage, you may experience occasional remission periods. Instead of averaging a bout every month or two, you may occasionally get a few months off in between flare-ups. Meniere’s doesn’t just go away on its own, so there will eventually be another bout coming. You may have just learned how to manage your Meniere’s disease triggers better or perhaps you have made some dietary changes that are helping (a low-sodium diet is a common suggestion).

Once you hit the final stage of Meniere’s disease, vertigo episodes may become few and far between. Unfortunately, much of the damage has already been done, so you may suffer from chronic balance issues at this point. This unsteadiness can be even worse in the dark since your body is relying on your eyes more to maintain balance.

This is the stage of Meniere’s where hearing loss and tinnitus reach their peak. At this point, both low and high tones are lost (only low tones are lost early on) leaving a patient with a small middle range of hearing in the affected ear. A hearing test is often a part of diagnosing Meniere’s disease, and it can also identify the stage your condition is at.

While most patients do not reach late stage Meniere’s due to receiving effective care to slow or reverse the progression of the syndrome, those who do experience late stage Meniere’s are at risk for an even bigger problem. While Meniere’s is almost exclusively a one-sided condition, in late stage up to 40% of patients develop Meniere’s in the other ear as well. As a result, total deafness could become a risk, especially if a patient opts for dangerous surgeries that can permanently affect hearing to try and reverse the condition.

Therefore, it makes sense to seek the best possible care as early on as you can before the condition has the chance to reach the late stage. Is there a safe way to find natural relief that does not involve the side effects of medications or the hearing loss risks of surgery?

Upper cervical chiropractors recognize the correlation between Meniere’s disease and a misalignment of the top two bones of the neck. In case studies, large groups of patients suffering from Meniere’s saw benefits from this safe and gentle form of chiropractic. In fact, in one study of 300 patients, 97% of the participants saw a 90% improvement in vertigo as well as significant improvements in hearing loss and other symptoms.

What is involved in upper cervical chiropractic care? There are also three stages.

This process allows you to receive safe and effective care on an as-needed basis. It can save you money in the long run and may lead to overall well-being. Its effects of correcting a C1 and C2 misalignment may not be limited to Meniere’s symptoms. To learn more, find a practice in your area and schedule a consultation.