3 Case Studies that Connect Vertigo to Head and Neck Trauma

3 Case Studies that Connect Vertigo to Head and Neck Trauma 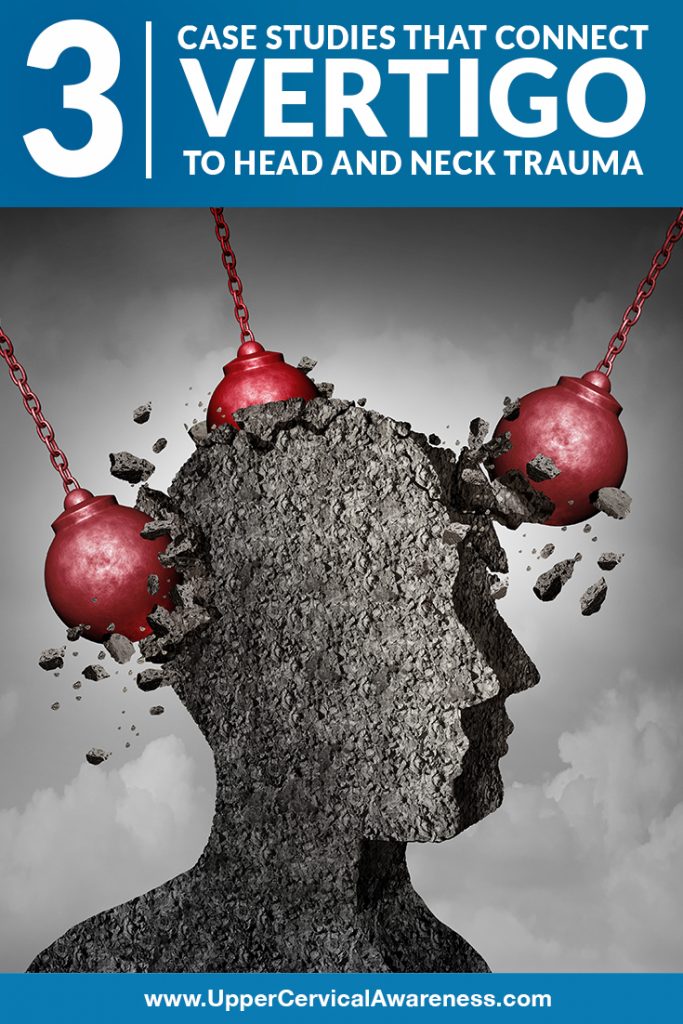 Vertigo is a false sensation of movement that patients can feel in a number of different ways. While most people think of it as the room spinning, vertigo can also be experienced as a tilting or swaying sensation. For example, you may experience vertigo when you first get back to land after being on a boat for a while. That feeling like you are still rocking up and down on the water is a form of vertigo.

Vertigo treatment is limited, and doctors often struggle to find the underlying cause of this symptom. As a result, many people feel like they simply have to learn to live with vertigo. Others see it as a sign of aging since vertigo becomes more common the older a person gets. But this is not the case either. Vertigo causes simply become more common the older you are.

Does that mean there is little or no hope if you are dealing with severe or recurring cases of vertigo? Not at all! We’re going to look at three in-depth case studies that involve vertigo relief coming from what you may see as an unlikely source – upper cervical chiropractic care. First, before we consider the case studies, you need to know what upper cervical chiropractic is.

Upper cervical chiropractic is a subspecialty that focuses on the top two bones in the neck, the C1 and C2 vertebrae (also known as the atlas and axis). These bones surround and protect the area where the brainstem meets the spinal cord. They also help to facilitate blood flow to the brain. Therefore, this a key area of the spine for many different aspects of overall health.

Upper cervical chiropractors use diagnostic imaging techniques to pinpoint misalignments down to hundredths of a degree. This allows for very gentle adjustments that don’t involve the popping and cracking sounds you may associate with chiropractic care. There is no rough twisting or jerking of the neck. The practitioner uses gentle pressure or an adjustment instrument.

With that in mind, let’s examine some of the case studies that make this an exciting option for patients who are dealing with vertigo.

Here are the results of three case studies that collectively involved nearly 500 patients. In each study, the patients were all suffering from vertigo as well as an upper cervical misalignment that had previously been unidentified.

This study involved 139 patients who were suffering from a vestibular condition known as Meniere’s disease. Besides tinnitus, hearing loss, and pressure in the affected ear, these patients were dealing with severe vertigo. In fact, before care began, many of the patients were also experiencing nausea and vomiting during their vertigo flare-ups. After upper cervical chiropractic care, all but 3 patients saw dramatic improvements in vertigo and overall health. In fact, the 3 patients who did not receive the maximum benefits were the ones who dropped out of the study just 6 weeks in.

The same researcher decided to build on the previous research with an expanded study. This time, 300 Meniere’s patients with upper cervical misalignments were found. Similar results were achieved. The average severity of vertigo for the patients was 8.5 out of 10 when the study began. Within just six weeks, the average vertigo severity was reported at 3 out of 10. The study continued over a 6-year period in which 291 patients had vertigo reduced to a severity of just 0.8 out of 10. As a result, the researcher postulated that the upper cervical misalignment was causing the symptoms, such as vertigo, by affecting the function of the eustachian tubes. These tubes drain fluid away from the ear. If not functioning properly, excess fluid would result in all of the symptoms of Meniere’s disease.

In this study, 60 patients who had experienced neck trauma were suffering from vertigo in the aftermath. After they received upper cervical chiropractic care, 80% of the patients were completely vertigo-free. The other 12 patients also experienced a significant reduction in their symptoms. The upper cervical misalignments had a variety of causes. Some patients had been in car accidents. Others had slipped and fallen. Since the C1 and C2 are responsible for more than half of the range of movement of the head, these bones are particularly susceptible to misalignment. And due to the sensitive location they are in, even fractions of a millimeter can make a difference for the ears and the central nervous system.

As you can see, when a misalignment of the atlas is in play, the results are almost always positive and dramatic for the patient when gentle correction takes place. Therefore, it just makes sense for a patient suffering from vertigo to see an upper cervical chiropractic for an examination. Even if you can’t think of a head or neck trauma that would have caused it, an examination can reveal if subluxation exists. Then, a customized adjustment can be prepared to correct the misalignment in a safe and long-lasting manner.

If you are suffering from chronic or recurrent vertigo, especially if you have a history of head or neck trauma, contact an upper cervical chiropractor near you today to schedule a consultation. You can use the search feature on this site to locate our preferred doctors.