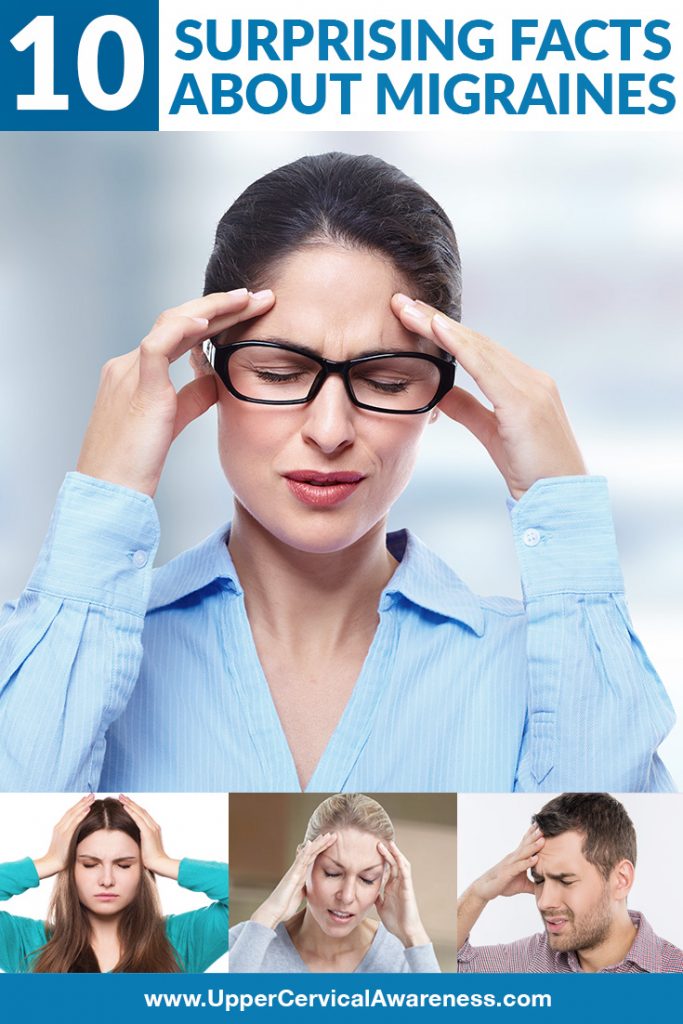 If you suffer from migraines, you may not be surprised by all of the facts on this list, but your friends, family, and boss may be. The truth is that people who don’t experience migraines themselves are frequently misinformed about this condition and what it can result in. With that in mind, we’ve compiled this list of 10 surprising facts about migraines. The last one is providing hope that natural relief from migraines is possible.

If the only person you have ever heard talk about migraines is your mate, a friend, or an employee, then you may not realize how common the condition is. Unfortunately, because of the stigma attached to migraines, many people are silent about their struggle. However, just about everyone knows someone who is dealing with migraines.

#2 9 in 10 Migraineurs Can’t Work During an Episode

Since many people have the mistaken idea that migraines are just bad headaches, they are unaware just how debilitating this neurological condition can be. Most people cannot carry out normal daily functions while dealing with a migraine. Sensitivity to light, sound, and smells may make it necessary to retire to a dark, quiet room to be alone until the bout ends. For some, nausea and vomiting compound the difficulties even more.

#3 1.2 Million Americans Go the ER for Migraines Each Year

That is a shocking figure for just one country. This leads to increased medical expenses for the entire family. It is no wonder that a household with just one migraine sufferer will spend approximately 70% more on healthcare than a family with no migraineurs. About 1 in 4 US households have at least one migraine patient.

#4 If You Have Migraines, Your Kids May Get Them

Migraines aren’t hereditary themselves, but the propensity toward them may be genetic. As a result, the child of a migraine patient has a 50/50 chance of ending up with migraines. If both parents get migraines, the risk jumps up to 75%.

#5 Migraines Can Affect Both Sides of the Head

Many websites define migraines as being single-sided, but this is a misconception. About a third of migraines affect both sides of the head. So don’t write a migraine off as a simple tension headache just because the pain is on both sides. You have to consider other symptoms that accompany the head pain and whether or not it is a pulsating or throbbing pain (which occurs in 85% of migraines).

#6 3 Times as Many Women Get Migraines as Men

One of the reasons for this may be a link between hormone fluctuations and migraine occurrence. For example, until puberty migraines are actually more common for boys than girls. Also, women who get migraines often acknowledge that the frequency and severity of attacks increase during menses, menopause, or pregnancy.

#7 Migraine Increases the Risk of Many Other Health Conditions

Migraine patients are more likely to also deal with everything from depression and anxiety disorders to irritable bowel syndrome. These accompanying health conditions only serve to compound how debilitating migraines can be.

The fact is that there are just not enough doctors who specialize in migraines. In the US alone there are about 38 million migraine patients and only 500 headache specialists. As a result, most patients are being treated by general practitioners, most of whom just prescribe whichever medication they are told is presently the best for migraines.

According to the Migraine Research Foundation, more than 50% of people who get migraines never receive an official diagnosis. Some are trying to avoid the stigma. Others are misdiagnosed with headaches or other conditions. Many don’t even go to the doctor and just try to self-medicate with over-the-counter drugs. Unfortunately, these cause rebound headaches when taken too often.

#10 Neck Pain Is One of the Primary Symptoms of Migraines

Researchers have found that 75% of migraine patients also experience neck pain either before or during an attack. This surprising fact may lead to understanding where migraines are caused. While most researchers focus on the head, the neck may be the true source of the problem and therefore the source of the solution.

Upper cervical chiropractors have been looking to the neck to relieve migraines for years. This is because we understand that the genesis of many headache conditions is a misalignment of the atlas (C1) vertebra. How does this bone relate to migraines?

Upper cervical chiropractors help relieve these underlying issues by precisely measuring misalignments and correcting them with a gentle and long-lasting adjustment. This has led to less severe or frequent migraines for many. Some even find complete resolution of the problem. To learn more, schedule a consultation with a practitioner in your area.